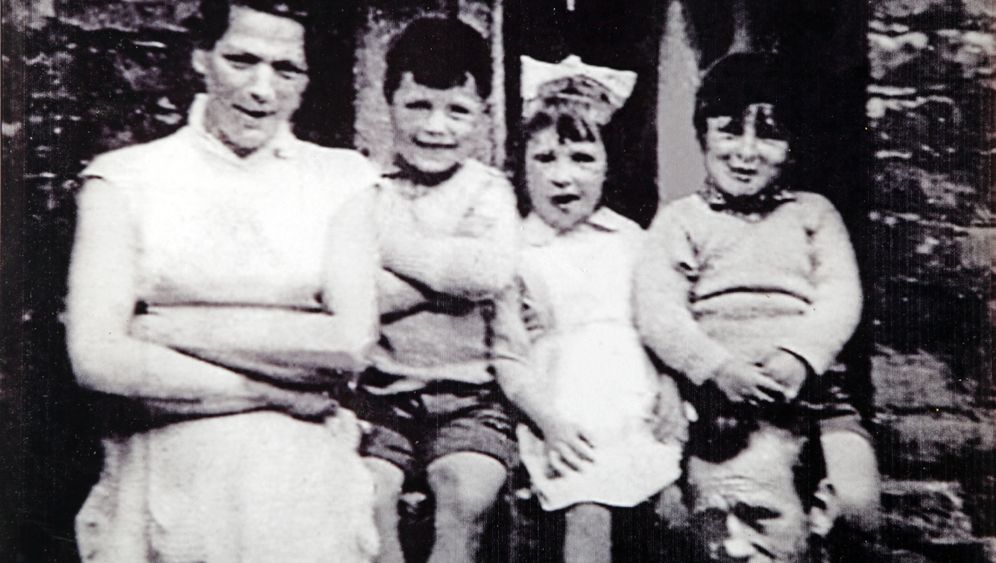 For a while, recently, Helen McKendry had reason to believe things were looking up. The man whom she thought had destroyed her life had been arrested and was being held at the police headquarters in Antrim, a fortress-like building 20 kilometers (12 miles) northwest of Belfast, Northern Ireland. McKendry hoped that he would remain locked up for a long time to come -- preferably the rest of his life.

But then he was released and, a short time later, appeared at a press conference wearing a dark suit, white shirt and red tie, smiling coldly and insisting he was innocent. Although the man -- 65 years old, slim, elegant, with a gray beard and glasses -- could pass for a teacher or a banker, he is in fact the most controversial politician in Northern Ireland: Gerry Adams, the president of the Irish Republican Sinn Féin party. Sinn Féin is the political arm of the Provisional Irish Republican Army (IRA) and currently the second-largest party in the Northern Ireland Assembly.

McKendry says she could have screamed when she saw the coverage on TV, especially when one of his supporters exclaimed: We will not allow our leader's reputation to be tarnished!

Adams, who is also a member of parliament in the Republic of Ireland, is considered the architect of the peace process between Catholics and Protestants, which culminated in the 2007 election of a joint Democratic Unionist Party and Sinn Féin government. But now the Police Service of Northern Ireland is in the process of investigating the most horrific of the crimes committed during the Troubles, as the conflict in Northern Ireland is often called -- and the trail seems to lead to Adams, whom some people claim played an important role in the NRA.

Adams denies the allegations and claims they are politically motivated, warning that the investigations could jeopardize the peace process. There is some truth to the latter claim, given how precarious the country's social consensus still is today -- many in Ireland have not forgotten the past, a 29-year power struggle over the island nation's identity, and many old wounds are still festering.

In Killyleagh -- a tidy village in County Down, half an hour's drive from Belfast, surrounded by green, rolling hills that are dotted with farmhouses -- Helen McKendry is sitting on an old sofa in the living room of her house, giving a telephone interview to a radio station in Bogotá, Colombia.

It's raining outside. Maggie, her small, white dog, has retired to her doghouse. McKendry's husband Seamus brings her a cup of tea and strokes her shoulder, but she doesn't seem to notice. She lights a cigarette, exhales smoke through her nose and tells the story of her life, the story of the murder of an innocent woman -- her mother -- on a night in December, 1972. She tells the radio station on the phone that the murder happened on the orders of Gerry Adams, a brigade commander in the IRA at the time.

1972 was one of the bloodiest years in Northern Ireland, a time of paranoia, when no one trusted anyone else. Life was especially dangerous for anyone rumored to be an informant. Back then, McKendry was 15, the fourth child of Jean McConville, an angular, self-assured woman who, after the death of her husband, had been left to raise 10 children on her own. "But my mother wasn't the type to complain," says McKendry.

The family lived in Divis Flats, a drab, low-income housing complex in western Belfast. Most of its residents were Catholic, poor and angry. Gunfire, power outages and raids on apartments were a daily occurrence in the area, which was IRA territory. The McConvilles were outsiders in Divis Flats. Helen's mother, Jean, came from a Protestant family and she had converted to Catholicism when she married her husband. People wondered if she could be trusted, whether she was spying for the British.

One fall evening, the family was sitting in the living room. They had lit candles because the power was out. They heard gunshots outside, which was not unusual. Suddenly there was a scream outside their door, and then the sound of someone crying and whimpering. When Jean McConville went to see what was happening, she found a British soldier with a gunshot wound lying on the steps. She knelt next to the man and held his head until the ambulance arrived. Helen watched the scene unfold from the window.

But the neighbors saw it, too.

When Jean McConville came back inside, her son Archie reproached her for helping an Englishman. "My mother immediately slapped Archie," says Helen. "She almost never hit us. Archie stood there holding his hand to his cheek. She put her arms around him, wiped away his tears and said: That injured man has a mother who is worried to death about him. I did nothing more than tend to him on her behalf. It was hardly enough."

The next day, everyone in Divis Flats knew that Jean McConville had helped an Englishman.

On the evening of Dec. 7, about a dozen men and women, some of them masked, burst into the apartment. They intimidated the children with their weapons and dragged their mother away. She was taken to an IRA safe house, where she was most likely tortured, and then later killed execution-style. Her body was buried near a beach. The bones were only found and identified 31 years later. An investigation into the murder revealed that McConville was never an informant.

After the murder, Helen cared for her younger siblings until a social services agency intervened. The children were separated and placed in orphanages. "Unfortunately, we are no longer in touch. My brothers have almost all ended up on the wrong track." Sitting in her living room, McKendry seems much older and tired than 57. She is a very sad woman -- but a persistent one.

"The fight is now going into the final round," she says. "The police are tightening their net around Adams." In addition to the criminal investigation, says McKendry, she plans to sue Sinn Féin for £3 million (€3.7 million) in damages.

Perhaps the most important evidence in the case will come from witness testimony, including information collected as part of an oral history project organized by an Irish historian in partnership with Boston College in the United States. The project assembled the recollections of 26 IRA veterans, recorded between 2001 and 2006 by a former IRA member named Anthony McIntyre. Although it was originally intended solely for the use of historians, police have since obtained the material through a court order.

McIntyre left the IRA in 1998, but still had ties to many former companions, including bomb-makers, killers and kidnappers and was considered trustworthy when the project began. Over a five-year period, McIntyre convinced his former fellow IRA members to tell him their stories -- under the strict condition that the recordings could only be published after they had died. The fact that this promise was broken makes him furious. "I gave my word of honor. And besides, these aren't the kinds of people you'd want as enemies."

Investigators gained access to some of the recordings last year. After the first arrest of a former IRA commander in March, Gerry Adams appeared voluntarily for questioning. Then, in late April, he was taken into custody for four days.

Although Adams has consistently denied having been a member of the IRA and portrays himself as an architect of peace, only someone whose authority was acknowledged within the IRA could have achieved the compromises necessary for the peace process in the early 1990s. This is perhaps the tragedy of Adams' life -- that he needed a war to lay the groundwork for peace. And now that war is catching up to him again.

He is being incriminated by new testimony from men who, until now, have been silent. One of them, Peter Rogers, lives in a small house in a village on the Atlantic coast, with only his Cocker Spaniel Tilly as a companion. Rogers is furious at his former commanders, and he is talking.

"Yes, I spent half of my life in the IRA, out of conviction. I never betrayed anyone. But now -- now I'm angry about the way Sinn Féin is behaving, how it is indifferent to the memory of the victims, and I don't like the Jean McConville matter at all."

Rogers says that in October 1980, he was ordered to transport a load of nitroglycerine, about 50 kilograms (110 lbs.), from Ireland to England, apparently for attacks in London.

"I was delivering potatoes at the time," he recalls. "I had a blue Ford van, my cover. When I received the explosives, in rods as thick as an arm, I noticed that they were unstable, not good material. I knew what I was doing." He says he then reported the problems. "I was told to go to a meeting in Dublin. There were two commanders there: Martin McGuiness, who is now the deputy first minister of Northern Ireland, and Gerry Adams." According to Rogers, the two men listened attentively, discussed the matter with each other and then ordered him to transport the material anyway.

"I got into a shootout at a road block and killed a man. It still weighs heavily on my mind today. I was sent to prison. My son was seven months old at the time."

When asked whether he was sure that the men were Adams and McGuiness, Rogers said: "Of course. Why should I lie? I'm 69 and have nothing to lose. I just think we need truthfulness."

Helen McKendry wants the same thing -- truth -- so that her mother can find peace, and she, perhaps, too.