Wednesday's emergency meeting in Frankfurt, attended by French President Nicolas Sarkozy, Chancellor Angela Merkel and important European Union leaders, was hastily convened. And its last-minute nature underscores how dramatic the situation has become in the run-up to the EU summit in Brussels on Sunday. Sarkozy even missed the birth of his daughter, as wife Carla Bruni gave birth to Dalia Sarkozy on Wednesday evening.

With only a few days to go before the EU summit, Europe's two most important countries still remain divided on a key issue. It is a division that threatens to jeopardize efforts to agree to a comprehensive rescue package on Sunday.

France is pushing for the euro backstop fund, the European Financial Stability Facility (EFSF), to be provided with a a banking license that would enable it to use its assets as collateral to borrow even more money from the European Central Bank (ECB). Both Germany and the ECB oppose the step, but France is insisting.

"You know the French position and we are sticking to it," French Finance Minister Francois Baroin said in Frankfurt before the meeting. "We think that clearly the best solution is that the fund has a banking license with the central bank, but everyone knows about the reticence of the central bank. Everyone also knows about the Germans' reticence. But for us that remains ... the most effective solution." Both Baroin and his German counterpart Wolfgang Schäuble also participated in the meeting.

Senior officials in the German government say the country is opposed to the French solution. Berlin instead favors an approach that would turn the backstop into a kind of insurance fund providing guarantees to public and private investors by covering the first 20 to 30 percent losses on their investments in state bonds. Such a move could allow the fund to martial aid worth up to €1 trillion. The German government also enjoys the ECB's support.

Following Thursday's meeting, it appears Germany and France could be facing an impasse in the euro crisis. After two hours, the talks ended without Merkel or Sarkozy providing any statement.

According to the Financial Times, Charles de Courson, a member of France's national assembly who had met with Sarkozy prior to the Frankfurt meeting, said: "It is not just Merkel who needs to be convinced. … (The president) hopes to find a solution. If there is not a solution on Sunday, everything could melt."

There was no confirmation after the talks as to whether the sticking point had been discussed. Representatives of the German government said only that the meeting dealt with open questions pertaining to the rescue of the common currency. Since the announcement earlier this month by Merkel and Sarkozy that they would unveil a joint plan to save the currency, officials at all levels of both governments have been working feverishly to find an agreement. "There are extremely intensive discussions, extremely intensive conferences, conference calls and meetings," a spokesman for Schäuble said on Thursday morning in Berlin.

In addition to providing the EFSF with greater impact, the package is also expected to lay out a path for stabilizing Greece and to provide for the capitalization of European banks in the event the event of a Greek insolvency.

Draft guidelines for the newly structured EFSF already exist. German Finance Minister Schäuble has distributed them to leading members of parliament, but no details have been provided to the public. One thing appears to be clear, however. The document as currently formulated makes no mention of the leveraging plan preferred by Germany -- that of turning the EFSF into a kind of first-loss insurance. The omission could be the result of the ongoing dispute between Paris and Berlin.

At its core, the restructured EFSF is to provide greater incentive to investors to purchase government bonds from euro-zone countries. There are no plans to change the EFSF's actual lending capacity of €440 billion or the €780 billion volume of guarantees it has been provided by euro-zone countries.

Under the insurance model, the EFSF fund would partially insure government bonds of countries caught up in the euro crisis, but it would not provide 100 percent coverage. Countries whose reputations have taken a hit with investors like Spain and Italy would benefit from the plan given that the leverage solution would also be big enough to provide support to the euro-zone's larger economies if they ran into trouble.

In Berlin, Merkel is already facing resistance to any plans to leverage the EFSF. Prior to approval of the expansion of the backstop fund in parliament in September, a number of law makers said they would oppose any moves to leverage it. Leaders of the parliamentary groups of Germany's parties planned to meet to discuss the issue on Thursday. Members of the opposition center-left Social Democratic Party (SPD) and the Greens are demanding that a vote be held in parliament if the euro zone intends to leverage the fund.

"If the risk of losses rises in a significant way, then it is no longer the same EFSF" that the Bundestag approved with the support of the SPD, Thomas Oppermann, a senior party official stated on Wednesday.

Bundestag President Norbert Lammert, a member of Merkel's Christian Democrats, has rejected the demands. But in comments to SPIEGEL ONLINE, he warned the government against making major changes prior to Sunday.

"We have told the federal government clearly that the agreed to ceiling for guarantees (from Germany) must remain at €211 billion," he said. "The chancellor and the finance minister have also agreed to this." He said members of parliament would scrutinize the EFSF guidelines closely. Any increase in liability, he said, would require a new decision by the Bundestag's budget committee before the government can negotiate on Sunday. 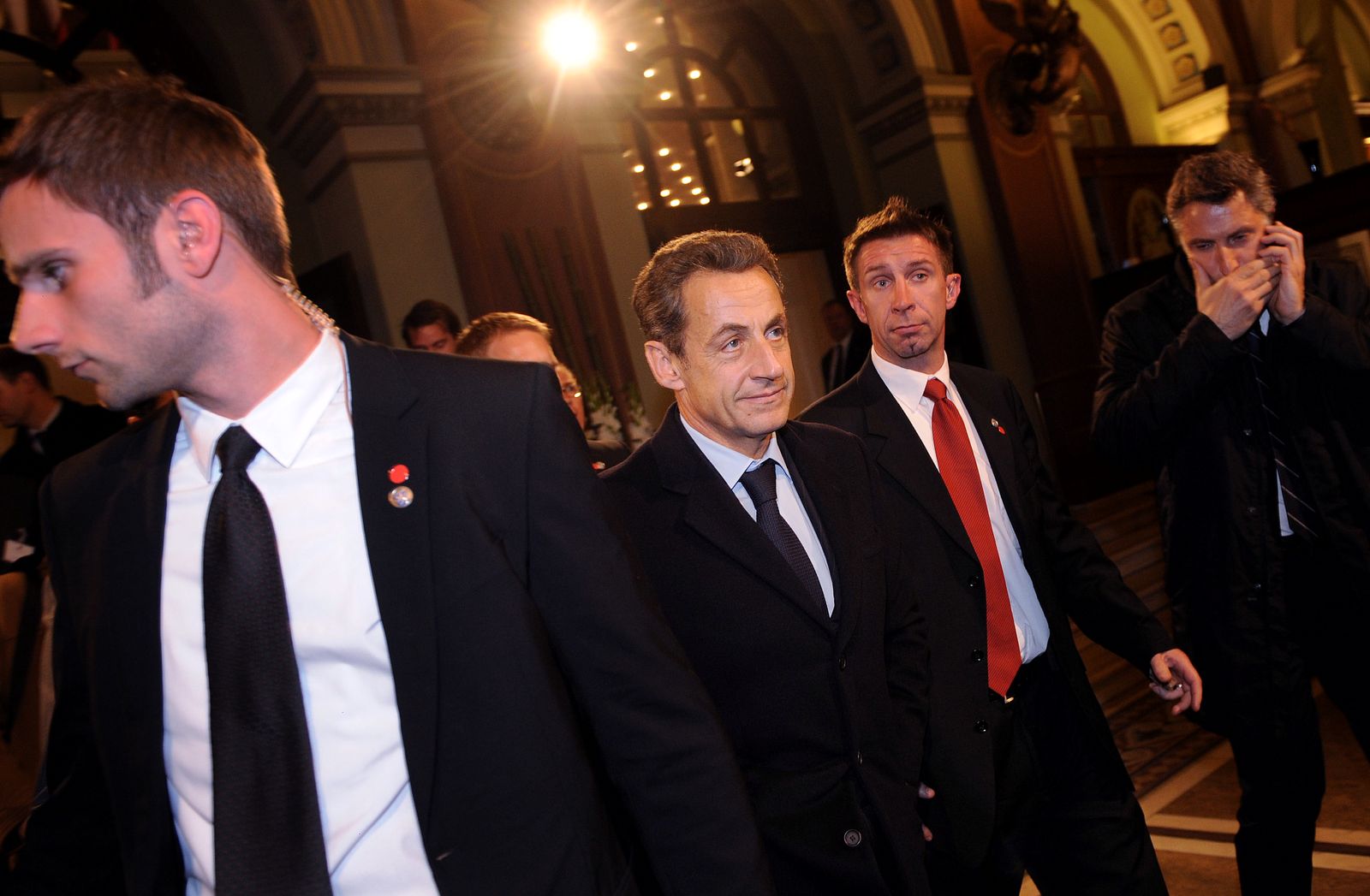 French President Nicolas Sarkozy departs a meeting on the euro on Wednesday evening.