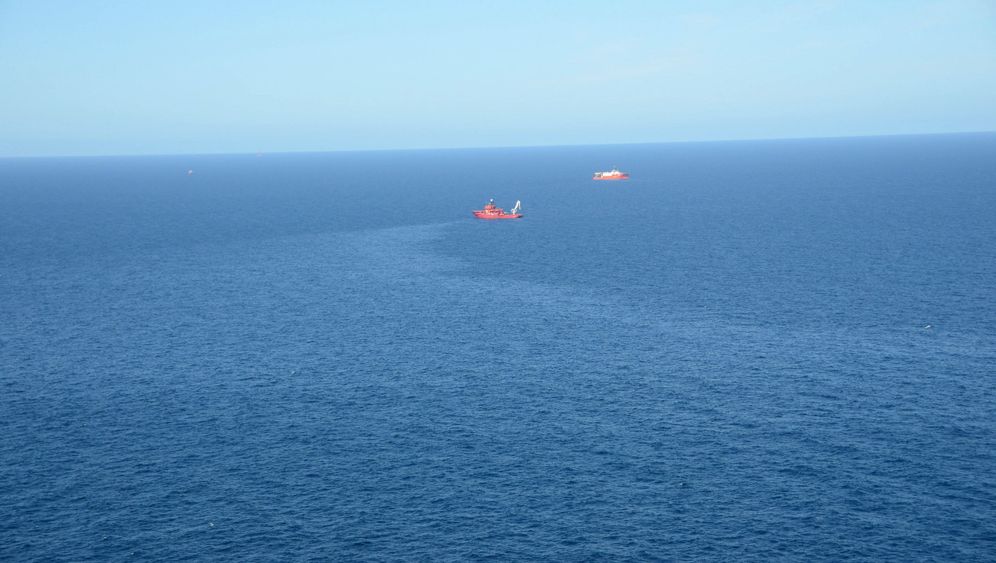 Oil giant Shell is struggling to contain the worst North Sea spill in a decade amid criticism over how honest the company is being with the public. The spill, which has continued through a second leak after the company had initially said the incident was "under control," was reportedly discovered last Wednesday but was only made public over the weekend.

Shell has chosen to update people on the spill with a brief message each day on its British website. "Shell is providing information only reluctantly; that must change," said Jörg Feddern of the German chapter of the environmental organization Greenpeace. Richard Dixon, the director of WWF Scotland, has called for a public inquiry into the incident: "Any inquiry will need to look at what Shell knew when, what they did about it and what they told their regulators and the public. It is already obvious that Shell will be strongly criticized for giving out so little public information so grudgingly."

The leak is on the Gannet Alpha rig about 112 miles (180 kilometers) east of the Scottish city of Aberdeen. Glen Cayley, technical director for Shell's exploration and production in Europe, defended the company's policy, insisting the company had had to ensure the information was reliable before releasing it. Since then, he says, the public has been informed continuously. And since the weekend, Shell has provided more details in discrete doses: The company, for example, will rely on the forces of nature to remove the oil. It said high winds and waves were dissipating the spill, which was not expected to reach the shore.

Shell has admitted some problems -- albeit in an ambiguous way. "It (the leak) had proved difficult to find because we are dealing with a complex sub-sea infrastructure and the position of the small leak is in an awkward place surrounded by marine growth," the firm said in a statement. Neither Shell in Great Britain nor its subsidiary in Germany was willing to expand on the details of the problem following requests from SPIEGEL ONLINE. "It is clear that Shell are having great difficulty dealing with their leaking pipeline," said WWF director Dixon. "It really does make you question the entire oil industry's ability to respond had this accident been on a larger scale or in the much more difficult waters of the Arctic."

An underwater robot has been searching for the leak, Shell reported on its website. A malfunctioning valve is believed to be responsible for the problem, which so far has seen more than 200,000 liters of oil escape into the sea. By way of comparison, 4000 times that amount leaked into the Gulf of Mexico in the devastating spill last year. "Exactly how much oil is now flowing into the North Sea, we don't know," said Greenpeace's Feddern.

And the experience of the Gulf of Mexico disaster suggests that the public should be wary of preliminary numbers provided by oil companies: BP's initial figure for the amount of oil which poured into the Gulf in April 2010 was 60 times too low.

Claudia Roth, co-leader of the Green Party in Germany, also believes there may be an unfair amount of reticence in the current incident: The German government and the European Union have fallen for Shell's "cover-up maneuvers," she said. Roth has long been urging Shell to lay all the facts of the leak on the table. "Shell reaps the profits, the environment and the people affected pay the price," she said. "Shell must be more informative about its emergency plans," added Greenpeace expert Feddern.

During an overflight on Monday afternoon, a broad oil slick could be seen south of the Gannet Alpha, Feddern reported. "It was definitely fresh oil." The visible slick is constantly shifting, Shell said, but only around one ton of oil has reportedly reached the surface so far.

There were two ships close to the spill, Feddern said, which could be supply ships with engineers and equipment on board from which repairs could be carried out on the seabed. But there was no sign of oil booms, which could contain the slick, or of ships to siphon the oil away. "Shell should remove the oil," Feddern urged.

Shell has admitted that the spill is "significant ... in the context of annual amounts of oil spilled in the North Sea." The British government, in the shape of a spokesman from the Department of Energy and Climate Change (DECC), has in the meantime described the spill as "substantial." It has also been labelled as the biggest incident of its kind in more than a decade.

According to Shell, the leak is now only emitting around 800 liters of oil a day into the sea. Technical director Glen Cayley had said the leak was "under control," but later revealed the oil had found a "second pathway to the sea," and was being released from the same source. When the leak will be fully blocked up is unknown.

The oil slick, meanwhile, has shrunk to the size of half a square kilometer, according to the German Central Command for Maritime Emergencies (CCME) in Cuxhaven using information from the British Maritime and Coastguard Agency (MCA). The MCA was keeping an eye on the slick from the air. On Sunday, Shell reported that the slick was 31 kilometers long with a maximum width of 4.3 kilometers. The water around the Gannet Alpha platform is around 100 meters deep, according to Shell's website. The CCME has requested a prognosis for the drift and thus potential spread of the oil from Germany's Federal Maritime and Hydrographic Agency (BSH). If the oil goes against current predictions and moves towards the German coast, several ships could be used to combat the slick.