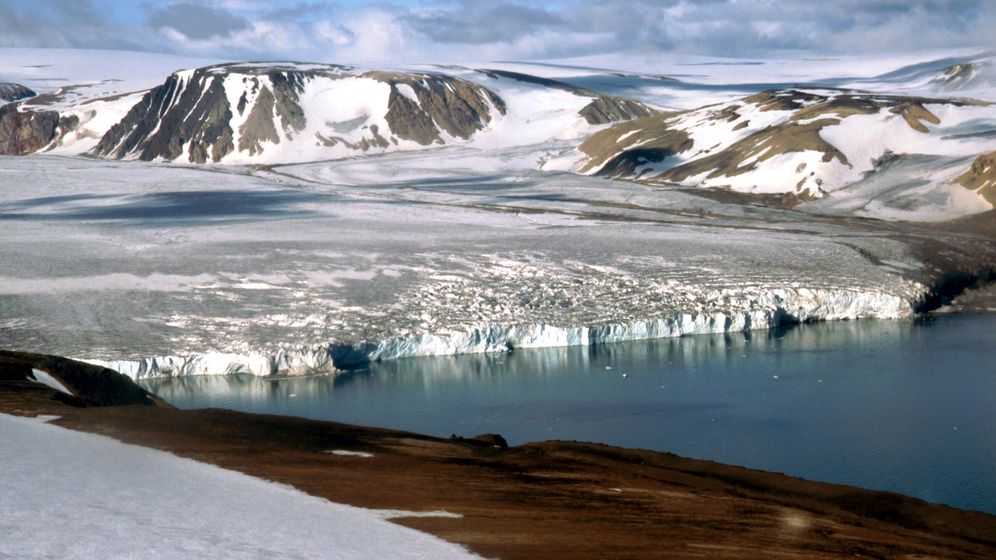 Photo Gallery: To Norway and Back

For Christian Rynning-Tønnesen, a feeling of amazement came first, and then came the shudder. Like the head of the Norwegian energy company Statkraft, anyone who takes the tiny red funicular from the research base at Ny-Ålesund to the nearby Zeppelin Mountain has a breathtaking view of the Spitsbergen island in the northernmost part of Norway. Everything is white. Between the snow-covered peaks glaciers are visible in the Kongs Fjord. The research centers lying far below look like children's toys.

The train ends at a wooden house, a good 470 meters above the fjord. Rynning-Tønnesen is taking part in a symposium at Ny-Ålesund that has brought scientists, politicians and executives together to discuss environmentally-friendly technologies. On Zeppelin Mountain, the energy executive wants to be shown how the researchers measure carbon dioxide and other greenhouse gases in the environment.

And this is when he shudders.

Because in the station, which is part of a worldwide network, it is frighteningly easy to see how human activity has warmed the planet. "We are already far beyond the natural variations of CO2 in the atmosphere," explains the host, Nalân Koç, research director of the Norwegian Polar Institute.

Ice cores from Greenland and the Antarctic prove that the CO2 concentration in the atmosphere in the last 800,000 years has fluctuated between 180 and 280 ppm (parts per million). But current readings at Zeppelin Mountain read 400 ppm.

In winter, the CO2 levels are usually higher because fewer plants are growing. In summer the values sink again. But the annual back and forth has long been out of sync. And the amount of greenhouse gases in the atmosphere is growing at a faster rate. "A couple of years ago, there was a rise of one ppm per year, and the current level is 3 ppm per year," says Koç.

"I was not clear on how quickly the rise is accelerating," Rynning-Tønnesen says. On the other hand, the energy executive couldn't wish for better advertising material than the scientists' curve graphs. Norway in general, and Statkraft in particular, generate power almost completely from hydroelectric power plants, without appreciable CO2 emissions. According to Rynning-Tønnesen, Germany and other European countries should, with the help of these facilities, make their own energy production more environmentally-friendly.

The aim is to make the chronically inconsistent energy producers like wind and solar energy more reliable. The Statkraft chief wants nothing less than to make Norway's hydroelectric power plants the rechargeable battery of Europe.

That is technically possible, because the facilities are to a large extent pumped-storage hydroelectric power plants, which create a buffer. With excess energy, for example from Germany, water is pumped from below to the higher level.

Spikes in electricity on especially windy or sunny days that otherwise would destabilize the German network could be thereby logically be used. The pump turbines only need about three minutes to go from a standstill to full power. An energy shortage in the south would send the water flowing back into the lower reservoir, up to the point where there is a 1,000-meter height difference.

Generators then produce electricity that could flow back to Germany. "That is one of the most efficient ways to store energy," says Rynning-Tønnesen. Even though about 20 percent of the electricity is lost during these trips back and forth, Rynning-Tønnesen says alternative buffer technologies like hydrogen or natural gas production from wind energy or compressed air reservoirs are less attractive.

At the same time, Germany will have problems in the coming years keeping its electrical grid stable after the remaining nuclear power plants and old coal and gas powered plants that currently offset imbalances are no longer operational.

This is where the Norwegians want to jump in. "We don't need to build even one new reservoir for that," says Rynning-Tønnesen. Instead, he would outfit existing plants with new generators.

He estimates that with 200 to 300 additional installations, Norway could store 25,000 megawatts from Germany and other European countries in its reservoirs on short notice. That would be one-third of the average power used on the German grid.

But not every Norwegian shares in this enthusiasm, above all because such a plan would require numerous new overhead power lines. The network in southern Norway is currently not yet ready for a connection to a North Sea electric highway. New poles disturb residents, and there have already been protests on the Hardangerfjord. In Germany, too, it would require new electricity lines -- an equally difficult venture.

For the bold vision to become a reality, there would also need to be connections over the North Sea. Rynning-Tønnesen says about a dozen would be needed in order to realize his ambitious 25,000-megawatt plan. German energy companies estimate the number to be even higher. And only one cable is currently being worked on.

Meanwhile, with the €1.4-billion project "NorGer," the Norwegian company Statnett is planning an almost 600-kilometer-long high-voltage power line on the seabed. The direct current cable should, starting in 2018, transport 1,400 megawatts between Norway's southern coast and the Netherlands. "NorGer can come," the Dutch Environment Minister Stefan Birkner said last week. He said his country had achieved the necessary preconditions. "The approval process is very advanced," he said.

But many uncertainties remain. It will be disputed where exactly in the North Sea underground cables will be connected to the German high voltage grid. The station must convert the direct current from the cable into alternating current that can be used on land. Under discussion is a newly constructed facility near the community of Moorriem in northern Germany and a location at the site of the off-line nuclear power plant Unterweser, on the German North Sea coast.

It also remains unclear who will pay for the cables. At Statkraft, they are not ruling out the possibilities of requiring participants to take part in a consortium or buy certain quantities of transmission capacity. Regulatory reasons would prohibit them from building the cables themselves.

Other European countries are also interested in Norway's energy. The Netherlands has had a connection to the Norwegian grid since 2008, thanks to the cable "NorNed." The Danes are connected to their northern neighbors with several cables ("Cross-Skagerrak"). England ("HVDC Norway-Great Britain"), Scotland ("NorthConnect") and recently even Iceland are thinking about cable projects. The British and Dutch and also connected with the newly operational "BritNed" cable.

Rynning-Tønnesen is optimistic that more electricity highways will be built in the sea.

"We built up a gas pipeline system that today delivers to Germany a quarter of its natural gas," he says. "It's not impossible that we can do the same for electricity."

8 Bilder Photo Gallery: To Norway and Back