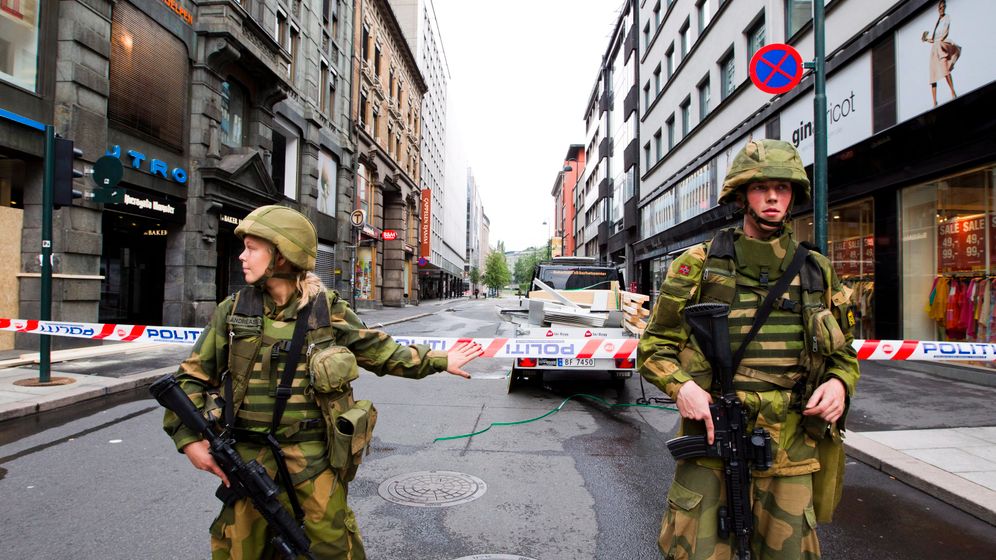 On Monday morning, it had seemed as if the death toll from the brutal Friday attacks in Norway would only rise. There was a long list of missing on the website of Norwegian broadcaster NRK in addition to 40 people described as yet to be identified.

It was a surprisingly large number, but the police had been careful about releasing additional details of those thought to still be trapped in the rubble of the government quarter in Oslo.

Then, on Monday afternoon, police significantly reduced the official number of those killed at the youth camp on an island outside the capital. Originally, officials had said that 86 people had been gunned down there by suspected perpetrator Anders Behring Breivik, who pled not guilty on Monday despite having previously admitted to the attacks. Now, the official number has been lowered to 68. The death toll from the bomb in Oslo rose from seven to eight, for a total of 76 instead of the previously announced 93. 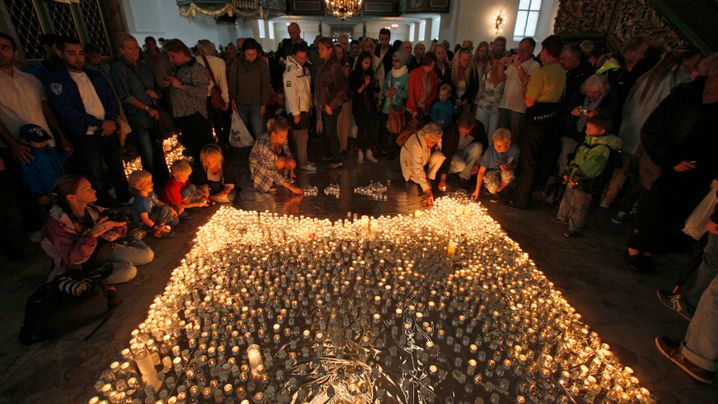 Since Friday's twin attacks, Norwegian politicians have repeatedly stressed that Norway will remain an open society, that one cannot allow the man behind them to chip away at this important and fundamental value of Norwegian society.

The sluggish and confusing way in which the police have been releasing information on the tragedy may not quite live up to this ideal of transparency. But it does show just how much the attacks have unsettled Norway, how the country is having trouble finding a balance between transparency and trust, on the one hand, and appropriate security measures and caution, on the other -- caution that is now likely only to grow after Breivik claimed in court on Monday that his network included two additional cells.

Norwegian security forces were clearly not prepared to respond to these kinds of terror attacks. Indeed, it took them roughly 60 minutes after the initial reports of shooting to make their way to the island that had become the scene of a horrific massacre of youths attending a summer camp organized by the ruling Labor Party.

Since the only helicopter available for the country's elite anti-terrorism unit was parked at Rygge airport, roughly 50 kilometers (31 miles) south of its base in Oslo, its members decided to travel to the island by car. When they finally arrived at the pier across from the island, they had no boat to make the crossing. Instead, it took them 16 minutes to commandeer private boats and cross over to the island.

Many of the campers on the island made frantic calls to the police but were not able to get through. The police claim their switchboard was overloaded. But there are also reports claiming that police hung up on some of the youths because they wanted to keep their lines open to take calls regarding the explosion in Oslo.

Even now, three days after the attacks, more and more details about police mistakes are emerging. The Norwegian newspaper Aftenposten reported Monday that security forces lost a precious 10 minutes in getting to the island because the engine of a police boat stalled, forcing the officers to transfer to another boat.

For the moment, both the press and politicians have showed reserve when it comes to pointing at possible police shortcomings. And officials have already admitted that their response was too slow. For the moment, few seem eager to score political points by criticizing the emergency response.

But there is no doubt that a debate on security is on the horizon in Norway.

Continued Openness in the Face of Threats

Norwegian security officials have faced possible threats for some time. Al-Qaida ideologues have explicitly labeled Norway an enemy for a number of reasons, including the fact that its soldiers are involved in the NATO mission in Afghanistan. In addition, ever since caricatures of the Prophet Muhammad were published in a Danish newspaper in Sept. 2005, terrorists have had their sights set on Scandinavia, with little apparent inclination to make a distinction among individual northern European countries.

Just a few weeks ago, Norwegian security officials released a report saying that they continued to believe an al-Qaida attack in Norway was possible.

Nevertheless, no security measures were in place in the government district in downtown Oslo. The streets holding government ministries and the offices of Prime Minister Jens Stoltenberg were not blocked off. Anders Behring Breivik, the 32-year-old Norwegian man likely to have been behind both attacks, was able to drive his explosive-laden vehicle into the heart of the quarter. Had so many government employees not been on vacation, many more than eight would likely have been killed.

For several years, a traffic sign has warned drivers they are not allowed on the street where the ministries and Stoltenberg's offices are. In 2009, Oslo's city council voted to completely block off the street. But, since then, nothing has happened. Now the attack has destroyed dozens of government offices and forced entire ministries to relocate.

The lack of security precautions in Oslo has long raised eyebrows abroad. Former government workers tell SPIEGEL ONLINE that, in the past, foreign politicians have voiced concerns about the level of security they found when making official visits to the prime minister's offices. They said they found the entire area far too vulnerable to attack.

"The price of our openness cannot be that government workers have to fear for their lives while at work," says Elisabeth Udgaard, a 32-year-old employee of a Norwegian ministry. "Openness and safety are not mutually exclusive," she added. "Having no protection is not open; it's naïve. Norway finally has to face up to this reality."

Friday's bomb exploded only 200 meters (650 feet) from Udgaard's office. "And I was still relatively far away," she says, "since eight other ministries separate my desk from the scene of the attack." 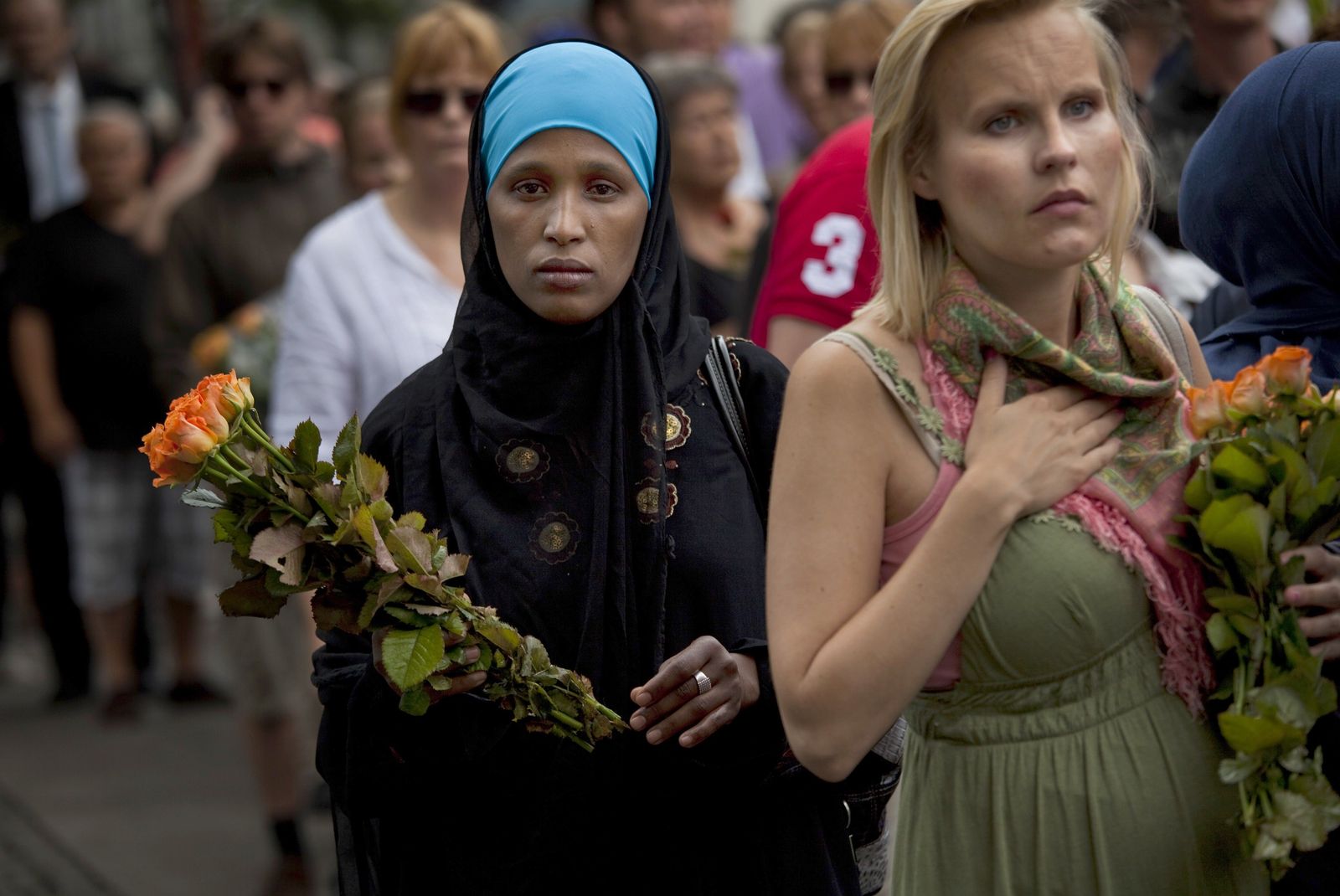 Flowers in hand, a mourner joins the masses en route to Sunday's memorial service. Anders Behring Breivik, a 32-year-old Norwegian man, has admitted to carrying out both the Utoya shooting and the Oslo bombing. He is due to make his first public statement in a court appearance on Monday.