Denmark's Conservative Party said this week it wants to introduce a ban on Muslim burqa or niqab dress codes which require women to completely cover their faces in public. 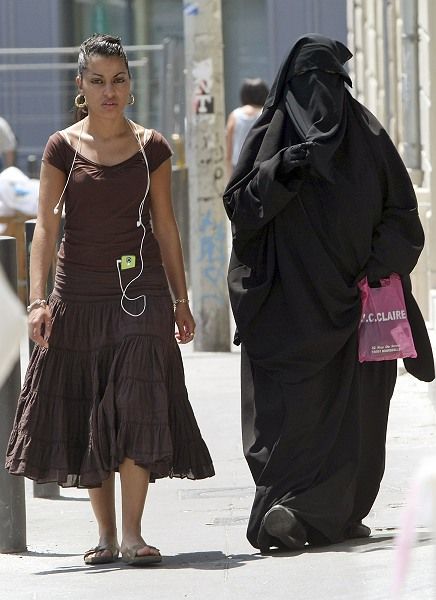 A niqab wearer in Marseille: A Danish Conservative Party politician has called for a ban on burqas.

"We don't want to see burqas in Denmark. We simply can't accept that some of our citizens walk around with their faces covered," Naser Khader, a Danish member of parliament of Syrian-Palestinian extraction who was recently appointed spokesman for integration issues for the Conservative Party, told the newspaper Jyllands-Posten.

In comments published on Sunday, Khader said the burqa is un-Danish and oppressive towards women and should be completely banned. He and his party say that what people do in their own homes is their business, but as soon as they walk into the public domain, one should be able to see their faces.

The Danish People's Party and the Social Democratic Party have welcomed the proposal, while the Liberal Party, which is the senior partner in Denmark's coalition government, rejects the idea of legislating about citizens' clothing, provided they are not employed in a public function.

"It's going too far if we start legislating on what sort of clothes people can and cannot wear. The burqa and covered faces should not be allowed if you work with people in the public sector -- but that is where we draw the line," says Liberal Party political spokesman Peter Christensen, who adds that it is important that politicians know where to draw the line in introducing policy.

Khader, however, says a ban is the only solution. "My view is that (the burqa) is not Islamic at all," Khader says. "The modern burqa was introduced by the Taliban when the movement came to power. So I associate the burqa with the Taliban."

The burqa ban is part of an integration initiative that the Conservatives' parliamentary group approved on Friday, although the party has not decided what punishment should be meted out to those who break the ban.

"Initially we're sending out a signal by saying that it should be banned. Then it's up to the lawyers to find out what sanctions should be introduced," Khader told the Jyllands-Posten.

Denmark is not the only European country where politicians have proposed a ban on burqas. French President Nicolas Sarkozy recently said that the burqa was "not welcome" in France, while France's urban regeneration minister, Fadela Amara, told the Saturday edition of the Financial Times that she was in favor of the burqa "not existing in my country." The Netherlands has also considered a ban on burqas.