Something went wrong during reactor experiment number 23,995. The fusion process started, continued for a second, but suddenly broke off. Before it collapsed the plasma in the reactor chamber began to vibrate, and microphones transmitted a squealing sound to the control center.

"The plasma probably had too much contact with the chamber walls," physicist Arne Kallenbach surmised, "and then underwent a sudden drop in temperature. That happens fairly often. Unfortunately, the plasma is pretty unstable, particularly during the phase when it is being heated up."

Kallenbach kept his eyes glued to the monitor. Like the other scientists taking part in the experiment, he waited for measurement data to come up on the screen. The room was shielded by thick concrete walls and resembled a mission-control center for space flights. But the scientists here at the Max Planck Institute for Plasma Physics (IPP) in Garching near Munich have nothing to do with launching vehicles into outer space. They're trying to reproduce fusion processes that go on inside the sun, and harness them for applications here on earth. The device they work with, a "tokamak" known as the Asdex Upgrade, is the largest fusion reactor ever built in Germany. "Tokomak" is derived from Russian and refers to the donut-shaped fusion chamber.

They've used it in more than 20,000 experiments, but the scientists here still haven't achieved their objective. "We will continue to work towards getting the fusion reaction down just right," says Kallenbach, "so that everything is precisely the way we want it to be."

For half a century physicists around the world have struggled with the problem of bringing nuclear fusion under control. Fusion -- as opposed to fission, which drives all commercial nuclear power plants now -- could solve a number of problems related to energy generation. The general public has given up hope in fusion, after all this time, but scientists working in the field of plasma physics appear to be making significant progress.

Günther Hasinger, the new director of the Max Planck Institute for Plasma Physics, is an astrophysicist, and until he took his new job a few weeks ago, his attention was focused on black holes in deep space. Now he's been forced to realize just how far scientists at his institute have quietly pushed their field.

"We are getting close to a breakthrough and things are moving forward much faster than many people realize," Hasinger maintained. "With a kind of 'Apollo Program' for nuclear fusion we could have built a reactor for commercial-scale production by the turn of the millennium. All we needed was the money to build a big enough machine."

Fusion takes place by itself within stars. Under conditions of extreme heat and pressure, hydrogen nuclei combine to form helium atoms, releasing enormous amounts of energy. This process of fusion, lasting for billions of years, has provided a constant supply of light and warmth on earth. But a process comes naturally to the sun is not so easy to reproduce in a lab.

For one thing, there are no machines on earth capable of creating the pressures that exist inside a star. Scientists try to make up for this deficit by creating temperatures that are much higher than those in the sun. They are able to heat electrically charged hydrogen gas to incredibly high temperatures -- more than 100 million degrees Celsius.

Plasma, to physicists, is the fourth physical state -- after solid, liquid and gas -- and high-temperature plasma has a density of about one millionth that of air at sea level. It can be fiendishly hard to control. Strong magnetic fields are needed to keep it in place, a technique scientists refer to as magnetic confinement. As soon as the plasma comes into contact with the walls of the reaction chamber, the impurities it picks up cause it to lose temperature. Then the fusion process then breaks down (as in experiment number 23,995).

Nevertheless, there is no longer a problem getting hydrogen nuclei to fuse. New reactors, using huge microwave components, heat the hydrogen plasma within seconds to temperatures several times those of the sun. The arsenal of plasma-heating instruments used by scientists in Garching includes a particle gun that shoots a beam of high-energy particles. These particles collide with hydrogen atoms in the plasma, which then slow down and give off huge amounts of heat. Someone in the lab has drawn a picture of a fire-breathing dragon on the particle gun.

But not enough energy is being released in these reactions to make the fusion process self-sustaining. A constant flow of heat has to be added from external sources. For the physicists it's like having to re-stoke wet firewood.

Confinement of the plasma simply isn't strong enough yet. Too much energy is lost. But the problem could be solved, say the scientists, with a larger fusion reactor.

"If we increase the volume of the plasma significantly, then the heat losses will automatically decline," Hasinger explained. "We call this the 'polar bear principle.' In polar regions it is easier for larger animals to maintain normal body temperature than it is for smaller ones."

To show that fusion has practical value, a consortium in Europe will build the world's largest fusion reactor in France. In a few months' time, construction of a new power plant will begin in Cadarache, near Marseille, as part of a project known as ITER (originally "International Thermonuclear Experimental Reactor"). The 500-megawatt experimental reactor should produce ten times more energy than necessary to heat its plasma. This would represent the sort of breakthrough Hasinger mentioned. 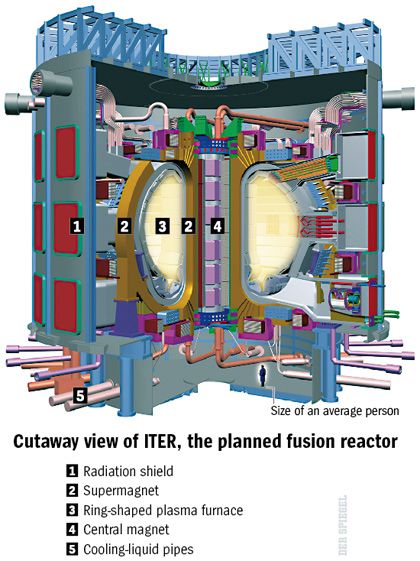 But this large-scale facility won't be finished for another decade at the earliest. And the first commercial-scale fusion power plants won't be ready until after 2050. However, says Hasinger, "When ITER is finally up and running ten to twelve years from now, there will no longer be any doubt in anyone's mind that this was a good investment."

An area of forest near Cadarache has been cleared, and the last of the wild boars that used to live there have moved on. Bulldozers have leveled the terrain. Concrete and steel have been ordered for a 30-meter-tall building that will house the reactor. Europe, Russia, the United States, China, India, Japan, and South Korea will finance the construction of the more than €5 billion project. It's already clear that ITER will wind up costing at least 30 percent more than originally estimated.

Critics consider this wasted money. Yet subsidies for the German coal industry, for instance, amount to €2.5 billion euros per year. If commercial-scale fusion works, the dream of having (almost) clean energy in abundance will come true. Can the human race run the risk of not perfecting a technology that could one day replace all nuclear-fission and coal-fired power plants?

What fusion power plants can do, in theory, sounds a bit like witchcraft. Nuclear fusion converts matter to energy, so a 1000-megawatt fusion reactor would require an amazingly small amount of fuel. It would burn the weight equivalent of around ten cubes of sugar per hour. A kilogram of hydrogen could generate as much electricity as 11,000 metric tons of coal.

Deuterium, an isotope of hydrogen used as a fuel in controlled fusion reactions, can be extracted cheaply and in almost limitless amounts from the ocean. Dependence on fossil fuels -- coal, oil, natural gas -- would quickly become a thing of the past. In contrast to coal-fired power plants, fusion reactors would not release greenhouse gases.

The risk of an accident would be almost nonexistent, given that even the slightest malfunctions cause fusion reactions to break down. The radioactive waste -- consisting of the inner walls of the reactor, struck by high-energy neutrons -- would lose most of its radioactivity within around a hundred years.

Tritium, a second isotope of hydrogen used as a fuel in controlled fusion reactions, constitutes a comparatively small risk. It's radioactive, but it gives off weak radiation and has a half-life of 12.3 years. The ASDEX Upgrade fusion reactor in Garching operates without tritium. In the ITER experimental reactor, on the other hand, tritium will be added to deuterium plasma as a kind of nuclear accelerant (see graphic). This results in a significant increase in the amount of heat energy released.

A few weeks ago in Garching, physicists discovered another way to improve the fusion process. The discovery is so recent that the results have not been published. Using the ASDEX Upgrade reactor they found that adding nitrogen produces a sensational effect.

Instead of being cooled off by contact with this impurity, the plasma grows hotter. "Just how this unexpected phenomenon comes about is something we don't really understand yet," Hasinger admitted. "Surprisingly, the addition of nitrogen seems to insulate the plasma better."

The nitrogen enigma suggests how many unanswered questions remain. The ASDEX Upgrade experiments will lay groundwork for ITER and for any commercial-grade plants to come.

One Step Beyond: The 'Stellerator'

The biggest challenge for physicists is to design magnetic cage for the plasma. All fusion reactors built so far have had this engineering weakness: Strong electrical pulses shot into the charged hydrogen gas create magnetic fields to confine the plasma, but at the same time they make it harder to control.

"With the electrical pulses it's as if we were forcing the plasma to build its own prison," Hasinger explained. "In response to this it starts acting like a wild animal caught inside the magnetic cage and it tries to break out. As a result we constantly have to keep readjusting the strength of the electrical pulses."

The scientists at the Max Planck Institute want to test a more stable fusion technology at a branch institute in eastern Germany. The Wendelstein 7-X reactor is currently being built at the Max Planck Institute for Plasma Physics (IPP) in Greifswald for over €400 million. It's based on a different reactor design -- a "stellarator" as opposed to a "tokamak." Key components for the reactor are being supplied by the nuclear research centers in the German cities of Jülich and Karlsruhe.

"We are creating a precision facility here. Nothing like it has ever been built before anywhere in the world," says Thomas Klinger, project manager of the Wendelstein 7-X. "Our reactor is going to be more difficult to construct than everything that came before it, but it will be much easier to operate."

The "stellarator" design has a magnetic cage formed by external coils. The plasma will remain securely confined by twisting the coils into somewhat bizarre shapes. Lined up, the coils look a bit like the spinal column of a dinosaur. State-of-the-art computer technology has made it possible to calculate optimum coil configurations for to keep the plasma under control.

Each of the seventy coils weighs six metric tons and costs a million euros. Turned on simultaneously, they will generate magnetic forces so powerful that the reactor needs to be built with super-strong bolts and screws. "There are absolutely no off-the-shelf parts here," says Klinger.

In a workshop at the IPP in Greifswald, engineers use laser instruments to measure each piece of the reaction chamber. There is no room for the slightest error. Klinger runs his hand across the steel vessel. "The welders are genuine artists," he says. "They showed up with their tools like the members of an orchestra might show up with their musical instruments. What they have created here is a kind of 'Mona Lisa' in the world of welding."

The first experiment is scheduled to begin in five years. The liquid-helium-cooled magnets will be switched on, valves will gently blow hydrogen into the vacuum chamber, microwave units will heat the plasma to temperatures many times those of the sun, and then -- hopefully -- a hellfire will be unleashed.

"To tell the truth, even for us physicists it's taking too much time to build a system so large and complicated," Klinger said. "But if we succeed, it will change the world. Just imagine what it would mean to supply a family with electricity for a year with just three bottles of water!"