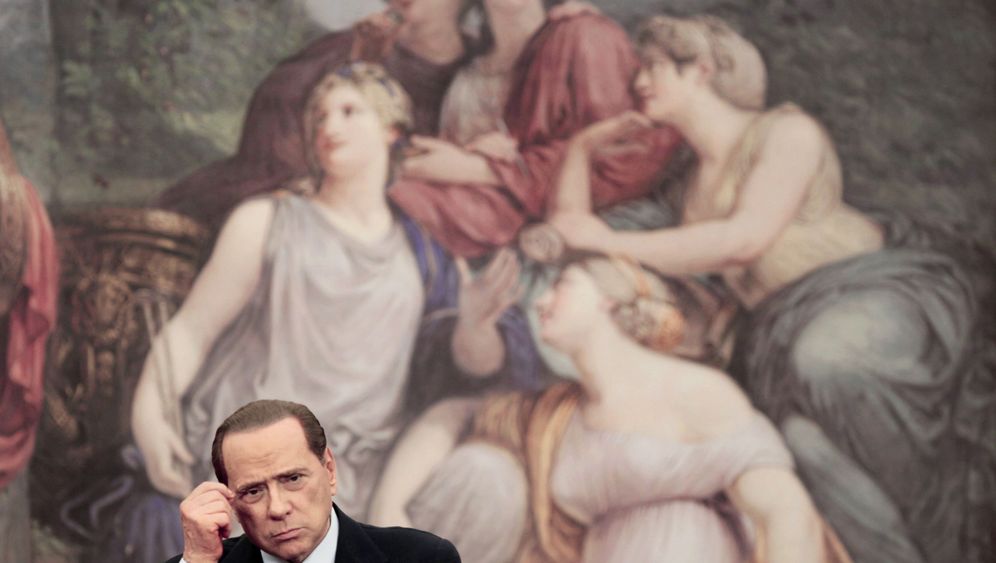 His star may be falling, but he continues to believe it is shining brighter than ever before. In the process, the 74-year-old Silvio Berlusconi -- Italian prime minister, media tycoon and billionaire -- is becoming increasingly ridiculous. Recently he insisted that other government leaders hold him in "the highest esteem" and that they see him as their "greatest expert." His own people, he said, would "build a monument" to him if they only better understood all that he does.

In reality, however, Italians pursue him with catcalls of "bunga bunga" and whistles -- as was the case last Friday as Berlusconi walked through the attractive seaside town of Portofino to his son Piersilvio's villa to attend the birthday of grandson Lorenzo.

The message Italian voters sent on Sunday and Monday was just as clear: They no longer seem willing to put up with the bizarre charm of their prime minister. In a referendum, Italians cast their ballots against the use of nuclear energy, against the privatization of the country's waterworks, and against a law which would better protect their head of government from the judiciary. Turnout was around 57 percent, and preliminary results indicate that the result of the referenda will be the failure of three important government projects.

Already 10 minutes before the closure of the polling stations at 3 p.m. on Monday, Berlusconi acknowledged that his country would have to bid "addio" to nuclear power. Much more important from a political standpoint was the fact that it was Berlusconi's second failure at the polls within just a few weeks, following his party's poor showing in municipal and regional elections at the end of May.

Picking up the Slack

The mere fact that the referenda attracted the necessary minimum of 50 percent of voters was a "political signal," said Berlusconi's predecessor Romano Prodi. Indeed, several other such votes in recent years had failed due to insufficient turnout. Italians had shown a preference for heading to the beach on election Sundays rather than making their way to the polling stations. And Berlusconi's government had hoped that would be the case this time as well.

But things turned out much differently. The scheduling of the vote meant that there was little time to mobilize Italian voters. In addition, Berlusconi ordered that coverage of the referendum be kept to a minimum in his significant media outlets. The prime minister owns the three largest private television channels in Italy and his office gives him a significant say in the state-run channel.

Students, musicians, priests and a small army of volunteers, however, picked up the slack. Posters could be seen everywhere: at the Colosseum in Rome, on the streets of Bologna, on the bridges of Venice. Popular musicians performed for nine hours before thousands of mostly young fans on Rome's Piazza del Popolo. Similar events took place in Bologna and Milan. Pizzerias handed out free pies to those who could present proof of having cast their ballots. Religious figures, from local priests all the way up to the pope, called attention to the referendum. It was the kind of campaign Italy hasn't seen in years.

It remains politically and legally unclear how to count the votes of the 3 million Italians living abroad, the majority of which did not receive ballot papers. But the political message of the vote is difficult to ignore, regardless of whether the exact turnout figure is later revised. A broad alliance of young and old, believers and atheists, conservatives and bohemians not only voted to stop the construction of nuclear power plants and the privatization of water supplies. More than that, they wanted to send Italy's political leadership a message that they could not continue with business as usual.

Some politicians have clearly understood the feeling of dissatisfaction among the population. Umberto Bossi, leader of the xenophobic, right-wing populist Northern League, a junior coalition partner to Berlusconi's People of Freedom (PdL) party, said even before the referendum result had been announced that the government would have to change its course "or die."

According to Bossi's ultimatum, Berlusconi has until June 22 to fulfill the Northern League's demands. They include tax breaks and the relocation of government ministries from Rome to Milan, both things with which Bossi hopes to win favor with his supporters in the north. But there is no money available for tax cuts, and Berlusconi's allies in the south oppose moving the ministries.

There is an apocalyptic mood within the government camp. Last week, Sicilian member of parliament Gianfranco Micciché left Berlusconi's PdL party with around a dozen deputies in tow. He now wants to set up his own party with a greater focus on southern Italy. For the moment, however, he will continue to side with Berlusconi in votes in Rome.

Meanwhile, all the surveys show that Berlusconi is losing support across the board. Even in his own center-right camp, only 13 percent consider him to be a suitable prime minister, the Italian newspaper La Repubblica reported on the weekend. He is suddenly in fourth place on the list, behind three politicians from his own ranks. Economy and Finance Minister Giulio Tremonti is in first place, with 23 percent support. Berlusconi no longer trusts Tremonti for that reason.

Sometimes, albeit very rarely, Berlusconi appears to have moments of self-doubt. He apparently recently told a confidant that he does not want to "end up like Craxi." Bettino Craxi was a Socialist Party leader who served as Italian prime minister during the 1980s and who furthered the career of the young Berlusconi. He became embroiled in a massive corruption scandal and fled into exile in Tunisia. He was sentenced in absentia to 28 years in prison.

Berlusconi may take reassurance in the fact that Craxi never served a single day of his sentence. 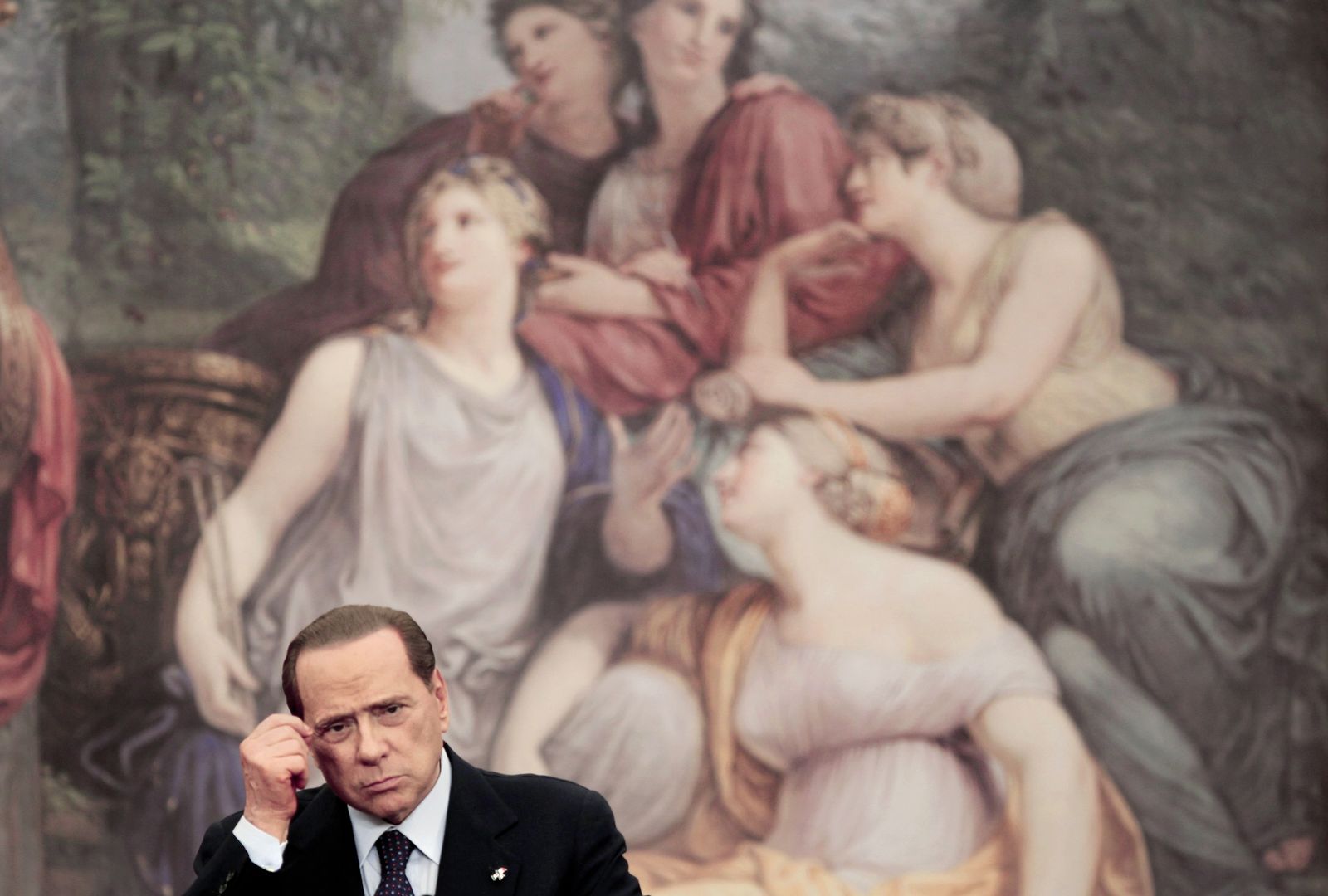 Italian Prime Minister Silvio Berlusconi's star would appear to be -- finally -- sinking. On Monday, he experienced failure at the polls for the second time in just a few weeks. A trio of referenda he supported were voted down.