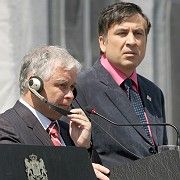 The sight gave hope to Georgians and credibility to their embattled president, Mikhail Saakashvili. On Tuesday, five heads of state from nations once controlled by the Soviet Union -- Latvia, Lithuania, Estonia, Ukraine and Poland -- arrived at a rally in Tbilisi to rebuke Russia for its invasion of the Caucasian country.

For French President Nicolas Sarkozy, who was engaged in frantic shuttle diplomacy between Moscow and Tbilisi to bring an end to the conflict, Tuesday's visit was badly timed. More than anything, it highlighted deep divisions within the European Union over how to deal with Russia. Since it expanded into Central Europe and parts of the former Soviet Union in 2004, Poland and the Baltic states have pushed the EU to take a stronger stance against Russia -- to the dismay of many diplomats in what some call "Old Europe."

Speaking to a crowd of Saakashvili's supporters in the Georgian capital, Polish President Lech Kaczynski, who organized the trip, was typically outspoken in his criticism of Poland's neighbor and one-time occupier. "You could say that the nation of Russia yet again showed its true face here today," Kaczynski said. "The aggression here is nothing new when it comes to history."

Indeed, nowhere in Europe does anti-Russian sentiment run as strong as it does in Poland, where monuments to the victims of Soviet atrocities during World War II occupy prominent real estate in the capital and the image of resistance to Russian oppression is a centuries-old part of the national identity. Since the fall of the Iron Curtain in 1989, history has increasingly informed policy. "Polish authorities present a more pessimistic view or opinion on the development of the EU-Russia partnership," Adam Eberhardt, head of research at the Polish Institute of International Affairs, told SPIEGEL ONLINE. "This pessimistic approach has somehow been confirmed by recent events."

As the conflict in Georgia escalated, Polish newspapers eagerly invoked the past. "Today's events are reminiscent of the takeover of countries by Russian Bolsheviks nearly ninety years ago," commentator Jerzy Haszcynski wrote in the conservative national daily Rzeczpospolita. "Moscow's response is beyond the norms of civilized countries that are close to the hearts of Western countries. If Russia can do whatever they want to Georgia today, the next victims could be Ukraine and the Baltic countries. Since the fall of communism the world hasn't been faced with such a threat from Moscow."

Others echoed a familiar line: "Old Europe," once again, failed to listen to the warnings of those with first-hand knowledge of Russian treachery. "Old Europe isn't listening to Poles, Lithuanians and Ukrainians. Old Europe doesn't want to anger Russia, and doesn't see the integrity of Georgia's borders as something worth risking its relationship with Moscow over," the left-leaning daily Gazeta Wyborcza wrote. "Once again, we can only try to tell them that we're not letting our feelings be guided by Russophobia but merely speaking from long years of personal experience."

Eberhardt says Poland is not alone among EU members in its antipathy towards a resurgent Russia. "Countries that had been part of the Soviet Bloc are much more sensitive when it comes to the, shall we say, non-pluralistic policies of Russia," Eberhardt says. "It's not necessarily an East-West split, but surely East European countries are much more sensitive to issues of sovereignty when it comes to Russia."

The divisions within the EU over Russia are hardly clean, however. Slovakia, for example, is a consistent Russian ally. And Swedish Foreign Minister Carl Bildt likened Putin's rationale for the invasion of Georgia to the thinking of Serbia's Slobodan Milosevic -- and to a certain well-known 20th century German politician. "We have reason to remember how Hitler used this very doctrine little more than half a century ago to undermine and attack substantial parts of central Europe," Bildt said after a visit to Georgia on Monday. "No state has a right to intervene militarily in the territory of another state simply because there are individuals there with a passport issued by that state or who are nationals of that state."

Poles are hardly unified behind their pugnacious president, though. A poll released Thursday inGazeta Wyborcza said that while almost half of Poles blamed Moscow for the current Caucasus crisis, more than one-third viewed Kaczynski's visit to Tbilisi as an "unnecessary provocation of Russia." Only seven percent called it a "success" for Poland.

"The differences of opinion within the EU on Russia are obvious," Eberhardt says. "I doubt whether all EU countries can find a common ground." But that doesn't mean Poland is about to go it alone. Public support for the EU in Poland is consistently above the 80 percent mark. Eberhardt says Poland's gotten better results in its disputes with Russia by working within the EU than by itself, citing a 2005 Russian embargo on Polish meat that was lifted after two years of EU support and pressure.

In the Polish press, the president's trip was seen by many as precipitous. "Europe can be a mediator in this conflict, and Poland can play an important role," Jedrzej Winiecki and Wawrzyniec Smoczynski write in this week's Polityka, Poland's leading newsweekly. "But to take on that role, Poland needs to fight for the interests of Georgia without falling into the anti-Russian tone that characterized Lech Kaczynski's first reaction."

And even within the Polish government many seem to think the president should cool down a bit. Kaczynski's flight turned into a minor scuffle between the president and Polish Prime Minister Donald Tusk, bitter political enemies. Tusk's office at first refused to authorize the use of a government jet for the trip, saying it was needed to evacuate Polish nationals from the conflict zone. Tusk later relented, but the plane's pilot refused to land in Georgia, forcing the delegation to drive across the border from Azerbaijan.

Yet Kaczynski was back in Poland yesterday -- and at it again. "We can't stay neutral when a great power uses its size advantage to descend on a smaller country," he said. "Here a large country that once did this to us -- in other words, made sure that Poland would suffer under oppression, that Poland wouldn't have its independence, that we wouldn't be able to choose what kind of country we lived in -- here's this country descending on someone else, and Poland is supposed to stay neutral. Well, that's something that I just can't understand."