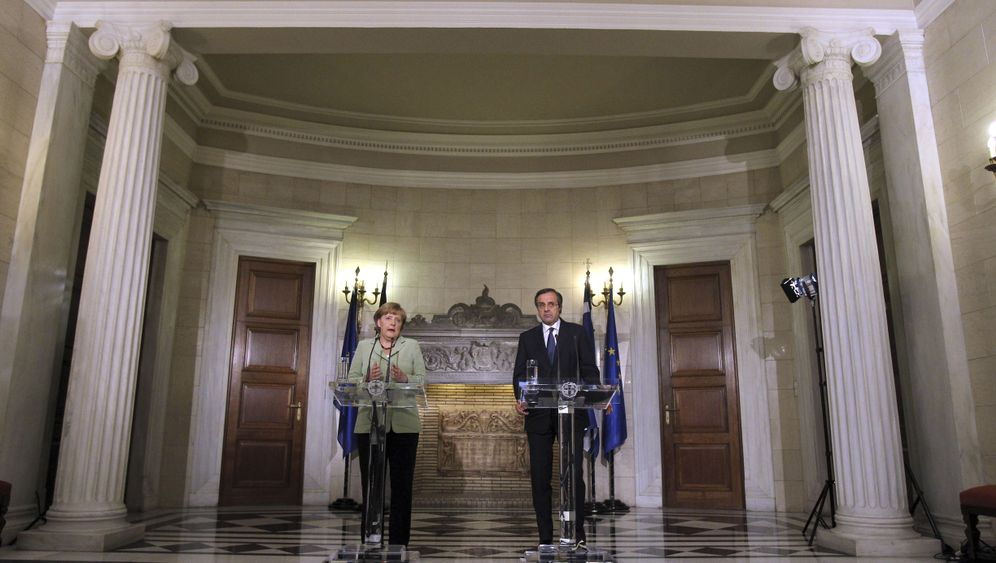 For months, Greek political leaders have been asking Chancellor Angela Merkel to come for a visit. Yet now that she is heading to Athens for a one-day trip on Tuesday, it has become clear that her mission is an impossible one.

The Greeks are hoping that Merkel will arrive with expressions of solidarity and pledges of support for the crisis-torn country. But 2013 is an election year, and members of her own governing coalition, not to mention much of the German electorate, would prefer to see her continue playing the role of the Iron Chancellor and reiterate her demands for reform and austerity. Germans simply don't want to send any more money to Athens.

Merkel's spokesman Steffen Seibert has sought to ensure journalists that Merkel will be able to satisfy both groups. She is traveling to Greece to "express her support for the demanding reforms" the country has embarked upon, he said on Monday. At the same time, she will "stress all that must still be done." It seems likely that her tightrope walk won't be entirely successful and that at least one camp will be disappointed. Perhaps even both.

The attempt to save Greece from bankruptcy has been underway now for two-and-a-half years. And at the moment it is looking more than ever as if a decisive point has been reached. Euro-zone member states must soon decide if they want to provide Athens with yet more aid and allow the country to pay back the emergency loans later than planned. Or if they want to forgive Greece a significant portion of the emergency aid the country has already received. Or, perhaps even both.

The current aid package runs until the end of 2014 and foresees Greece being able to return to the capital markets in 2015. At the moment, however, few believe that the timeline is realistic. Indeed, estimates point to Greece needing an additional €78 billion in funding between 2015 and 2020. Where exactly that money should come from remains unclear.

Equally unclear is how the country can reduce its sovereign debt load to a bearable 120 percent of gross domestic product by 2020. The Greek government's current budget proposal envisions this year ending with a debt load of 169 percent of GDP. In 2013, it will be 179 percent of GDP. "The debt level is extremely high," says Jens Boysen-Hogrefe of the Kiel Institute for the World Economy. "Given current conditions, the country won't likely be able to handle it."

Greece's spiralling debt load is primarily a function of the country's abysmal economy. In the last four years, the Greek economy has shrunk by fully 20 percent with economists expecting a further 6.5 percent drop this year. Athens expects that 2013 will see the economy shrink by an additional 3.8 percent, but most economists are more pessimistic.

The further the economy shrinks, the more difficult it becomes for Greece to pay the interest on its debt. "Thanks to the austerity packages, the Greek budget, minus interest payments, is largely balanced," says Boysen-Hogrefe. "The country requires external aid almost exclusively to service its debt."

At the beginning of 2012, that burden was lightened slightly when a large share of the country's private creditors agreed to forgive more than half of the debt they held. But the effects of that debt haircut have long since faded.

As a result, economists are convinced that Greece will need yet more assistance. "Either one can put together a new aid package or one can push through another debt haircut," says Boysen-Hogrefe. "It is possible that it will be a mixture of both methods."

A second default, however, would be much more painful for euro-zone member states than the first. This time, it wouldn't be just private debt holders who would suffer, but also public ones, such as Germany and its taxpayers.

Euro-zone states, together with the International Monetary Fund, have thus far sent some €149 billion to Greece. It is considered highly unlikely that the IMF would forgive Greece a portion of the aid it has provided, leaving the €126.8 billion from euro-zone countries, €34 billion of it from Germany.

If one takes the debt cut from earlier this year as a model, which saw private creditors forgive 50 percent of the debt they held, that would mean that countries in the common currency zone would take a €63 billion hit -- with Germany alone bidding farewell to €17 billion. On top of that comes the potential hit that the European Central Bank might take. In its effort to drive down borrowing costs for euro-zone nations, the ECB purchased Greek sovereign bonds with a face value of some €45 billion, though the actual purchase price was much lower.

Were the ECB to take part in a program of debt forgiveness, Germany's share of the losses could be as high as €3.5 billion, resulting in a total haircut bill for Berlin of over €20 billion. Still, Greece would suddenly find itself free of some €170 billion in debt.

If everyone plays along, that is. And that isn't likely. The European Central Bank in particular has indicated that it would not take part in any such debt forgiveness program. Even a debt restructuring program involving the extension of the bond periods or a reduction of the interest owed on those bonds is unappetizing.

Pushing the Problem into the Future

"We can neither extend the periods on Greek sovereign bonds nor can we lower the interest payments," Jörg Asmussen, the German member on the ECB board, told the newspaper Bild am Sonntag over the weekend. "Both would be a form of debt forgiveness and thus a direct financing of the Greek state. Legally, the ECB is not allowed to do that."

Beyond the legal concerns, however, are the political concerns facing Merkel. With general elections looming next autumn, the last thing she wants to do is write off €20 billion in German taxpayer money during what promises to be a difficult re-election campaign. As such, it seems more likely that euro-zone countries will opt for a soft debt restructuring program involving an extension of bond repayment periods and a lowering of the interest rate due on those bonds. That, however, would also mean that Europe continues following the Merkel course of the last two-and-a-half years -- that of simply pushing the problem into the future.

Merkel, however, is running out of room for further delays. In 2014, the exact same conundrum will crop up once again. Either Greece will need additional billions of euros in aid or its creditors will have to forgive billions in debt. Or both. Meanwhile, the third alternative -- that of simply ceasing to provide aid and plunging Greece into an uncontrolled bankruptcy -- becomes more expensive with each passing year.

No matter what happens, it will be expensive for the euro zone and expensive for Germany. "Either way," says Boysen-Hogrefe, "we will have to bear our share of the costs." And that is a reality that Merkel's visit to Athens on Tuesday will do nothing to change.