Jean Monnet, the French economist and public official who is regarded as one of the architects of European unity, once famously stated that "Europe will be forged in crises and will be the sum of the solutions adopted for those crises." That dictum also applies to the current sovereign debt crisis in the euro zone: European leaders have put in place far-reaching and beneficial institutional reforms that have the potential to conclude the decade-long process of introducing the euro.

Gone is the politically expedient "no bailout" clause of the euphoric early period of the monetary union. At that time, neither policymakers nor private lenders paid any attention to what the sources of economic growth in the periphery were or cared about which sectors were the destination of large capital inflows. Today, the fiction has ended. Europe now knows what happens if economic growth and fiscal policies are not sustainable over the business cycle.

For political leaders facing unpredictable and escalating sovereign debt crises, the initial imperative must always be to first confine the crisis before proceeding to solve it and prevent it from happening again. Despite the naïve calls from financial markets for an immediate comprehensive solution to the crisis, recent events make it evident that European Union leaders have, since May 2010, succeeded in their first task of containing the crisis. This is true both at the national level in, for instance, Spain and at the EU institutional level.

EU leaders should be congratulated for not wasting this crisis. They have set up the new IMF-inspired European Financial Stability Facility/European Stability Mechanism (EFSF/ESM) system, from which financial assistance -- tied to tough conditions -- is now available at short notice to euro-zone countries in need. These institutional innovations, combined with the European Central Bank's appropriately pragmatic set of crisis-related measures, represent lasting and politically legitimate tools that Europe can use to combat future financial instability.

During the initial stage of the euro-zone debt crisis, financial markets forced reluctant politicians to gradually recognize the true extent of the monetary union's problems. Now, with Portugal's request for an EU/IMF bailout, that stage has come to an end. This is clear from the lack of contagion to, for instance, neighboring Spain from the Portuguese announcement -- a development which effectively restricts the crisis to the "true" periphery of Greece, Ireland and Portugal. Those three states combined accounted for just 4.6 percent of the European Union's GDP in 2010 (approximately equal to the weight of mid-size states like Florida or Illinois in the US economy).

At this point, it is crucial that Germany in particular is not distracted by misguided and premature notions of "burden sharing" between creditors and debtors in the euro zone. The German and other AAA-rated governments must resist concerns over national sovereignty, which are outdated in a currency union. They should also not lament the crucial role that their demands for attaching tough conditions to financial aid has played in undermining corrupt and inefficient party and political systems and growth models in Greece, Ireland and (soon) Portugal.

Contrary to much short-term-focused conventional wisdom, the structural reforms implemented as a result of these countries' IMF-inspired programs represent the best opportunity for younger generations in these countries to share the euro zone's prosperity in the longer run. The European institutions now in place are capable of imposing tough conditions on national governments that fail to carry out reforms. That fact alone is testament to Europe's progress during this crisis.

Yet, while discussions of burden-sharing have been inappropriate during the current, initial stage of the euro-zone debt crisis, it is important that both euro-zone creditors and debtors realize that this issue will be crucial as we enter the second, and final, stage of the sovereign debt crisis. Financial history clearly tells us that sovereign debt crises cannot be settled without genuine burden-sharing between creditors and debtors at some point.

Banking Crisis Must Be Addressed

It is also self-evident that Europe's sovereign debt crisis cannot be solved without simultaneously addressing the euro-zone banking crisis. Luckily, the very fact that the euro zone has a twin crisis in both peripheral countries and the core European -- and not least German -- banking system will in some ways make negotiated burden-sharing between creditors and debtors easier to ultimately achieve.

When thinking about how the euro zone will successfully navigate the second, burden-sharing phase of its crisis, an important historical precedent is fortunately available in the form of the 1980s Latin American debt crisis. That crisis principally involved a number of Latin American country debtors and large, mostly American creditor banks. In 1982, Mexico and other large Latin American countries stopped servicing their large dollar-denominated debts to US banks, which would have become insolvent as a consequence if their bad loans had been valued on the basis of their current market price.

Crucially, however, in a bid to protect the solvency of the US banking system at the time, US banking regulators adopted a strategy of so-called "regulatory forbearance" toward American banks that shielded them from having to immediately recognize their enormous loan losses. That move contained the crisis and bought time for the banks to gradually build up profitability and sufficient loan-loss reserves. It was only in 1989, seven years after the beginning of the crisis, that the Brady Plan began the second, crisis-resolution stage of the Latin American debt crisis.

The Brady Plan, which avoided outright legal defaults against creditors, consisted of a series of negotiated voluntary debt swaps and restructurings (including principal reductions) between debtor nations and US creditor banks. What is critically important here is the fact that the Brady Plan only commenced at a point in time -- seven years later -- when US banks had amassed the necessary loan-loss reserves to be able to write down the value of their loans to Latin American debtors without having to realize a substantial earnings loss in the process.

Stress Tests Are Not Genuine

There are numerous parallels with the situation in Europe today. Just as US banking regulators in the 1980s essentially lied about the financial health of their banks to avoid a major banking crisis, European -- and especially German -- banking regulators are doing the same thing today with respect to the true health of core-European banks. It is not surprising that the stress tests of the European banking system in both 2010 and 2011, while marginally beneficial in transparency terms, have been designed to, on the one hand, encourage banks to accelerate their gradual campaign to raise more core equity capital, while on the other hand shield the same banks from having to immediately recognize the true extent of all their peripheral loan losses.

Were genuine stress tests to be carried out in the European banking system today, they would undoubtedly reveal capital requirements of hundreds of billions of euros, most of which would inevitably have to come from European taxpayers. That is obviously an outcome that European political leaders would prefer to avoid, given ordinary citizens' reluctance to pay for another "banker's bailout."

However, just because truthful banking stress tests are impossible today in Germany and other European countries, it does not follow that this situation will persist. During the 1980s Latin American debt crisis, it took seven years of regulatory forbearance to nurture US banks back to health and arrive at a point where burden-sharing could be negotiated between creditors and debtors. European governments, however, do not need to keep telling lies for that long before they can initiate the burden-sharing stage of the euro-zone debt crisis.

While it is clear from the Brady Plan experience that a final negotiated solution to the euro-zone debt crisis can only begin once the broader re-capitalization of the European banking system is further along, there is much that European banking regulators can do to speed up this process. They could, for instance, gradually introduce more honest annual banking stress tests, while making it clear to the banks in question that the government regulatory protection they continue to enjoy today comes at the price of negotiating genuine burden-sharing with creditors in good faith in the future.

Loan Conditions Must Be Implemented

Moreover, as has been seen with the Spanish cajas savings-bank sector, national governments can move forcefully to restructure insolvent regional publicly owned savings banks. In Germany, it is clear that state governments are extremely unlikely to be able to bear large future costs associated with the necessary recapitalization of their Landesbanken regional state-owned banks. Hence, the German federal government should either step in without delay or accept politically that the Landesbanken in question be liquidated.

But a better capitalized European banking system is merely a necessary, but not sufficient, criterion for a negotiated burden-sharing solution to the euro-zone debt crisis. Unlike the Brady Plan participants, creditors and debtors in the euro zone are linked together in a permanent currency union. Before any negotiated solution can happen -- which would avoid a legal default but which would involve banks taking voluntary haircuts on the principal paid for by "participating" bank shareholders -- it is therefore necessary to ensure that the structural conditions attached to EFSF/ESM loans have been fully implemented by recipient governments.

Not only will this maximize their debt service capacity and hence reduce the scale of the negotiated haircuts required, it will also minimize the risk of the current sovereign debt crisis being repeated. Only then will the process of introducing Europe's common currency be at an end. 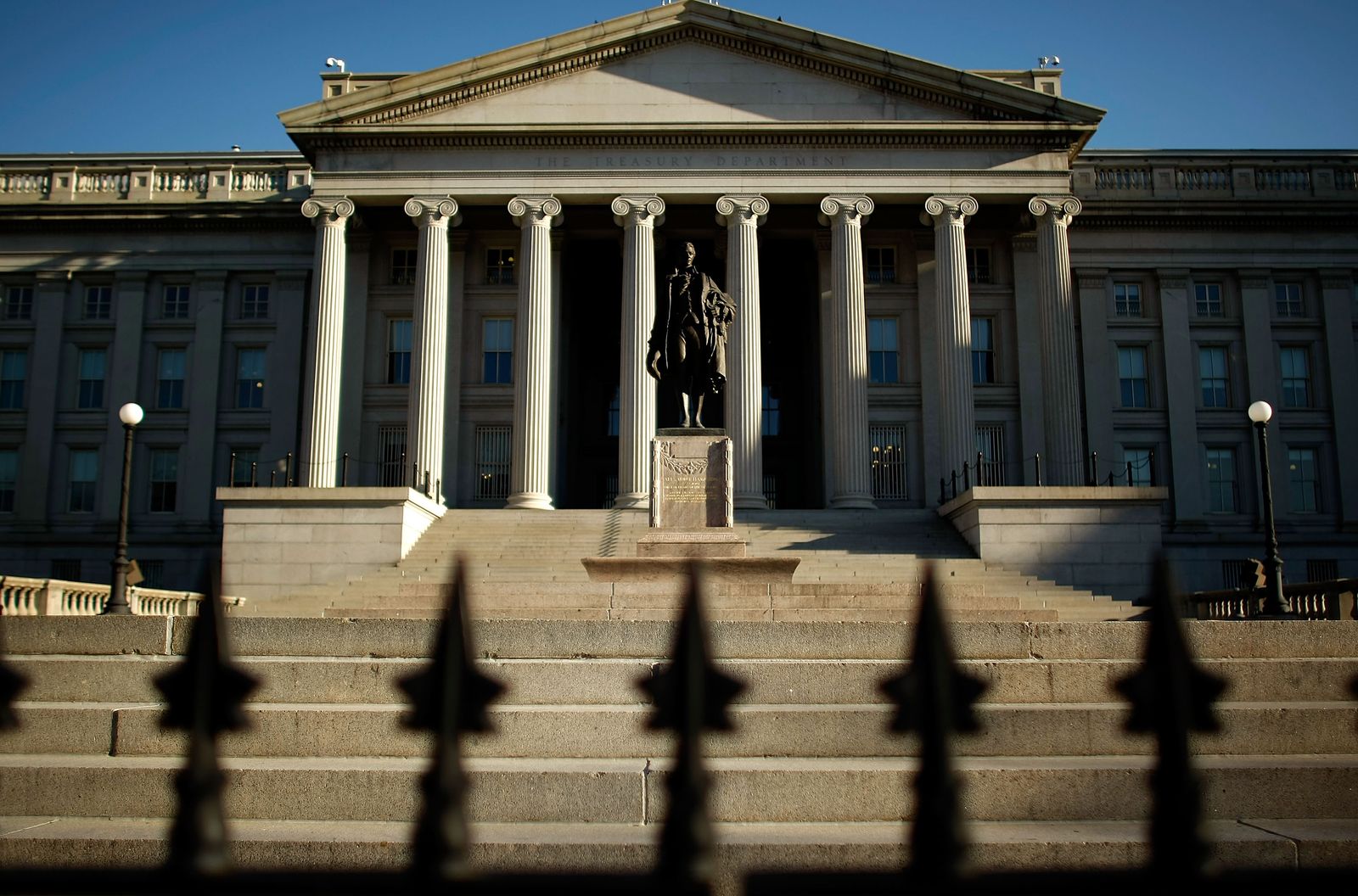 The US Treasury Department building in Washington. Euro-zone governments could learn a lot about dealing with the debt crisis by looking at the US Brady Plan in the 1980s.