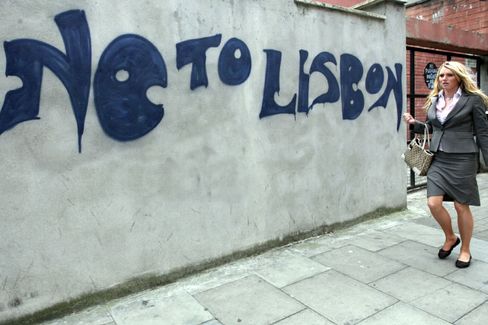 The EU project became paralyzed long before the Irish referendum.

On the day the Irish rejected the Treaty of Lisbon in a referendum, the Eurocrats in Brussels were as mad as hell. This is the last time, they must have been thinking to themselves -- those Irish will never be allowed to vote again. Lets put an end to these referenda. Theyre just too complicated for normal people.

First the French and then the Dutch said no to the European constitution in 2005. Then, after endless and painstaking work, the EU member states succeeded in pushing a new version through -- a little snip here, a little change there, a little paint touch-up there. And then, of course, a new name, even though the document essentially contained the substance of the original constitution. Its fairly certain nobody in Ireland read the document and there are plenty of possible motives for the no vote -- but none could be justified by the treaty itself.

The Treaty of Lisbon appeared to be well on track. Europes governments had promised not to put it to a vote before the people. And the only reason Ireland even held a referendum is that the countrys constitution requires it.

The pro-European bureaucrats were totally correct, too. The alliance of treaty opponents in Ireland -- mirroring previous votes in France and the Netherlands -- was bizarre. They came from the far right and the far left, with millionaires and the unemployed criticizing Europe in the most contradictory ways. On the one hand, they argued the Lisbon Treaty would make life difficult for entrepreneurs. But on the other they feared an erosion of workers rights. But all were united on one issue: their rejection of the treaty.

But Europes real problems began long before these failed referenda on dodgy treaties. For a long time now, the European Union has lacked a political father and mother figure. Angela Merkel and Nicolas Sarkozy and their colleagues may pay the EU lip service, but it is little more than that. Britain's Gordon Brown and his Czech counterpart Mirek Topolanek are also fond of talking up Europe. But each of them also ruthlessly haggles for each and every tiny benefit their country can possibly get, no matter how much trouble it causes.

They treat Europe more like a shell game than the political project of the century. What they themselves decide in Brussels is then shamelessly sold to voters back home by the ministers of agriculture, finance, economics, the environment, finance and transportation as something created by the people in Brussels, the second it starts to appear unpopular.

On top of this political duplicity, there are also the Eurocrats' tricks. The experts in Brussels, as well as Merkels advisers in Berlin, were so proud of their clever idea to rewrite the draft constitution rejected by French and Dutch voters to the point that no normal person could ever read it. They were essentially able to rewrap the constitution in the packaging of the Lisbon Treaty without anyone noticing -- at least not straight away.

The European train had already left the station, and it would get to its destination no matter what -- even if nobody knew what that destination might be. The most important thing was keeping the train running -- that was the motto as far back as when Europe enthusiast Helmut Kohl was still the German chancellor. In the long term, though, that cannot work.

Anyone who truly wants a European Union must clearly state what it is that they want. Do they want a casual trade alliance for the better implementation of globalized capitalism, or do they prefer something along the lines of a United States of Europe?" Or do they want something else altogether?

Then, one needs to ask the citizens of Europe if they want that thing too -- or not. It is certainly possibly to "Europeanize" this kind of referenda. One could, as the Green Party has suggested, conduct a Europe-wide survey on the same day in each member state and, by doing so, reduce the significance of irrelevant national issues, and see what it is that the people really want.

But in the eyes of Europes leaders, that could also go awry. Voters, either because they are badly informed or because they are simply in a bad mood, could say no, just as weve just seen in Ireland. Theres a name for that: democracy.

And while people may not understand how the Poles could elect the Kaczynski brothers or how the Italians could choose Silvio Berlusconi, no one has seriously questioned their right to vote. Only when it comes to Europe do they want to ignore the will of the people.

And voters fight back against that. When they get the chance.