For the past two years, Greece has wrangled with the euro-zone states and the International Monetary Fund (IMF) over its so-called "rescue." Austerity measures have been agreed to, aid has been paid and private creditors have been forced to accept "voluntary" debt haircuts. Despite all this, Greece is in even worse shape today than it was then. Its economy is shrinking, the debt ratio is rising and the country and its banks have been cut off from capital markets. There isn't even the slightest sign that the situation might improve. Something has gone very wrong with this rescue.

But none of the protagonists seem to have grasped this. They continue to negotiate as if things are business as usual, they let one "final ultimatum" after the other pass and they persistently fail to realize that their discussions have started to verge on the absurd. It would be a lot better to end this farce.

For weeks now, the Greek government has been negotiating with private creditors and the troika comprised of the IMF, European Union and European Central Bank (ECB) over a second bailout package. But it is already clear that this aid package will not save the country. It appears it will only delay a Greek insolvency -- and it will serve to create new hardships for the country's population.

It is time for politicians to admit that their carrot and stick strategy has failed. The idea that the country can be freed from its debt quagmire though austerity programs and aid pledges tied to conditions just isn't going to work. It won't even work if private creditors forgive part of the country's debt.

For months, Greek government politicians as well as the so-called rescuers in Berlin, Paris and Brussels have all been deceiving themselves. Each supposedly final rescue package is followed by yet another, and austerity pledges aren't being adhered to.

That has a lot to do with domestic political considerations. German Chancellor Angela Merkel and French President Nicolas Sarkozy must convey to their voters that they have the situation and, especially the Greeks, under control. Meanwhile, the government in Athens must, out of self-preservation, limit the burdens to its own people as much as possible.

That's why both sides repeatedly agree to promises that everyone knows they will not be able to keep. The current rescue package, for example, officially agreed at the euro summit at the end of October, already has to be improved because it has become too small.

The Greek economy is shrinking faster than assumed. And the austerity plan Greece approved last summer under pressure from its euro-zone partners is also failing to live up to expectations. That's no wonder, either, because €50 billion of the €78 billion in total savings pledged was tied to proceeds from privatizations that, not surprisingly, have failed to generate the profits expected.

Out of Thin Air

The truth is that it must have been obvious to all parties concerned, including the Germans, that the figures were pulled out of thin air. What kind of investor would invest so much money in a country that, for the foreseeable future, will be stuck in a serious economic depression?

The supposed rescue efforts have culminated in the latest German proposals. The German government would like to send a "budget commissioner" to Athens to keep an eye on the Greeks. If that doesn't work, then the Germans also want, at the very least, to be able to impound Greek accounts if they don't pay back their debts through an escrow account.

The suggestions have justifiably provoked outrage. Quite apart from the humiliation these measures would entail for the Greeks, Athens would almost certainly find a way to circumvent them. In the end, Germany would wind up turning an entire nation into its enemy without even gaining anything.

Perhaps, the Greece rescuers on both sides of the negotiating table should try being honest for a change. Here's the truth: If the country is to lastingly reduce its mountain of debt and, at some point, be able to borrow money on the capital markets again, then it needs a comprehensive debt haircut. In other words, it needs to go bankrupt.

And it's not just private creditors who will have to forego a large part of their outstanding Greek debts. It is also other European countries and the European Central Bank. That would be expensive for taxpayers across Europe, and it would also be economically risky. Indeed, no one knows what consequences a Greek bankruptcy would have for other crisis-ridden countries like Portugal, Ireland or Italy. But at least it would be an honest solution.

Of course, things wouldn't stop there. The euro-zone states would also have to build a bigger firewall around the remaining crisis countries in order to prevent contagion. They would have to help some banks that get into trouble as a result of a debt cut. And they would have to provide Greece with a real opportunity to get back on its feet and start growing under its own steam -- in other words, a kind of Marshall Plan.

All this would be very expensive, and German taxpayers would also be forced to do what they have feared from Day One -- which is to pay for Greece. But this solution has two major advantages. The payments would be limited, and they would actually help Greece.

And unlike everything that has been negotiated up until now, the solution would also be worthy of being called a rescue package. 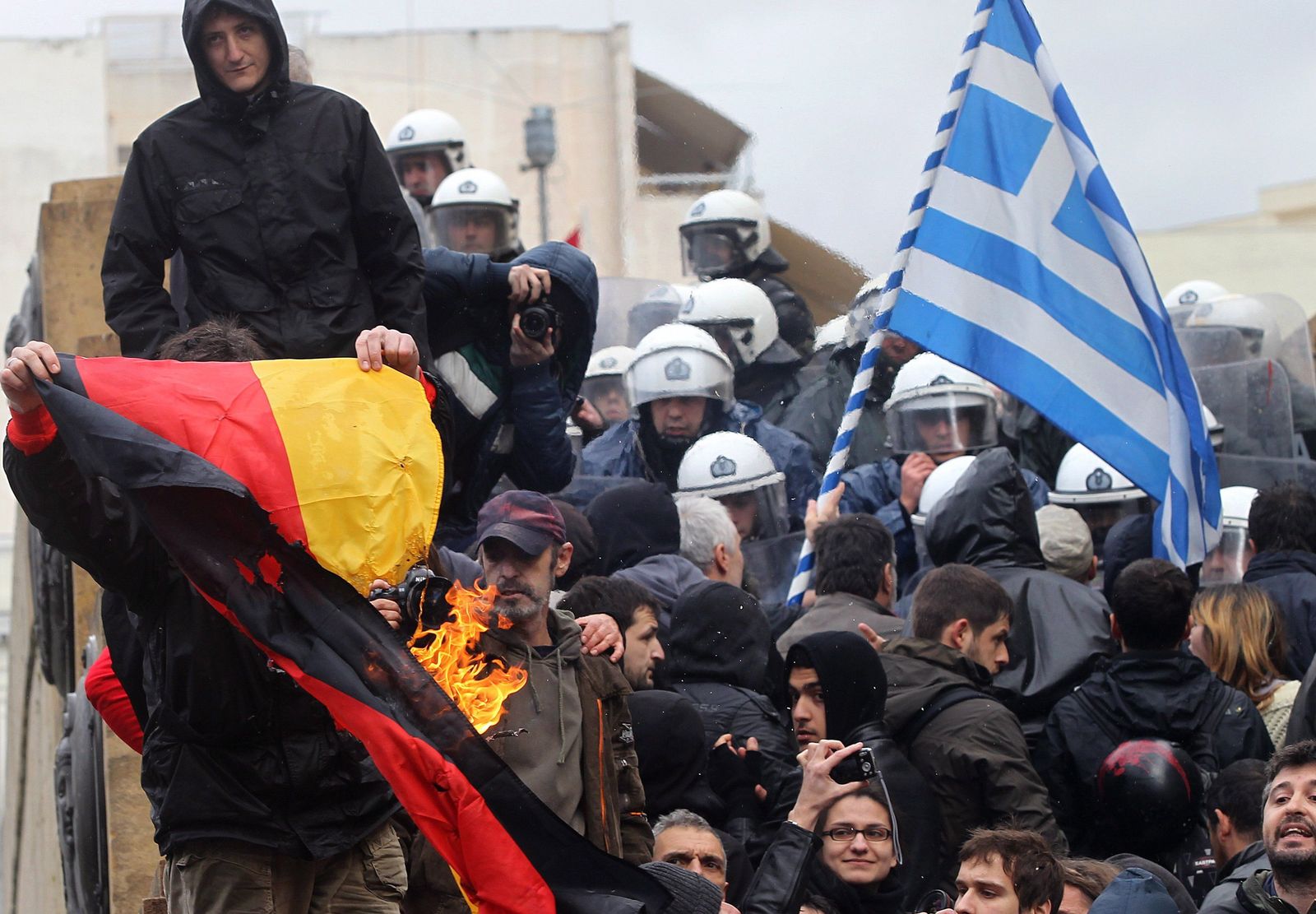 A protester burns a flag of Germany during a protest in Athens: Making enemies with an entire people