Quiet has returned in Sumte. Last autumn, journalists from around the world suddenly descended on the village of 100 residents in the state of Lower Saxony, when it was reported the tiny town would have to take in 1,000 refugees. Even the New York Times dispatched a reporter. Half of those migrants have now arrived in Sumte, but in sharp contrast to the doomsday predictions of refugee opponents, the response by locals here has been temperate. "We're handling everything very well," Mayor Grit Richter recently said in a newspaper interview.

Quiet has also returned to Passau. On some days in 2015, as many as 8,000 refugees arrived each day in the city at the German-Austrian border -- more than in any other place in Germany. The respected weekly Die Zeit described it as a "German Lampedusa," referring to the Italian island that had previously been a magnet for boat refugees. Despite this, Mayor Jürgen Dupper affirms: "Of course we can handle it."

One hears little about the asylum debate these days from places like Sumte or Passau. The same holds true of Eichstätt in Bavaria, where the city and volunteers have joined forces to organize refugee integration, or in cities like Hamburg, Berlin and Dresden, where thousands of people continue to volunteer to help refugees, sorting donated clothing at asylum-seeker hostels and offering German-language courses for new arrivals.

And yet, it's the Cassandras who continue to dominate the debate. They complain of breaking points that have allegedly been crossed and warn, as German philosopher Peter Sloterdijk did last fall, that there "is no moral obligation for self-destruction." Conservative Bavarian Governor Horst Seehofer joined the chorus by warning of a "collapse" of the state.

Drowning Out Voices of Reason

It is true that there is considerable room for improvement in the handling of the refugee crisis. People are continuing to die along the European Union's external borders (though that is not something that those who claim to be concerned about the refugee crisis are particularly concerned about), the planned distribution of refugees across Europe has failed and, yes, some of the migrants are criminals.

But it is also true that refugee integration has been a success story in many parts of Germany. For a long time, the German government ignored the refugee issue and, despite knowning it was necessary, failed to create an infrastructure for handling new arrivals. Ultimately, however, Germany's civil society did an impressive job of making up for the state's shortcomings.

Nevertheless, those in Germany who oppose the refugees continue to act as though the country is on the verge of collapse. They're acting as cheerleaders for Germany's downfall, and their cacophony has grown so loud that they have drowned out any voices of humanity, pragmatism or reason in the public debate.

Indeed, the conservative Christian Social Union from Bavaria, the populist Alternative for Germany (AfD) and Islamophobic PEGIDA movement and their ilk have pushed the refugee discourse so far to the right that the German majority simply shrugged when parliament recently pushed through the most drastic revision of asylum rights in the land since the early 1990s.

Even as Chancellor Merkel publicly announced, "We can handle this," her government in recent months has been pulling the emergency brakes, declaring a number of countries to be "safe countries of origin" -- thus eliminating the right of such nationals to apply for asylum in Germany -- expanding residence restrictions that limit the movement of refugees in the country and imposing restrictions requiring asylum-seekers to remain in camps or initial reception facilities until their applications are processed. The government is also moving to restrict the right of the reunification of families. All these steps have a singular aim: to deter refugees from coming to Germany.

Despite this, Merkel's asylum policies are still considered to be generous, even on the left side of the political spectrum. This is partly attributable to the vocabulary adopted by Merkel. In contrast to the conservative wing of her party, she does not speak of an "upper ceiling" on the number of refugees that can come to Germany.

Last summer's refugee movement mobilized more people than almost any other event in recent German memory. And the people who provided a helping hand then are still out there today giving their support. It's not a small group of people either -- but their voices are getting drowned out at the moment. That's why those who support more liberal asylum policies need to get out there to make sure their voices are heard. They need to get networked and to clearly articulate their positions. The nay-sayers and doomsday proclaimers cannot be allowed a monopoly in this debate. 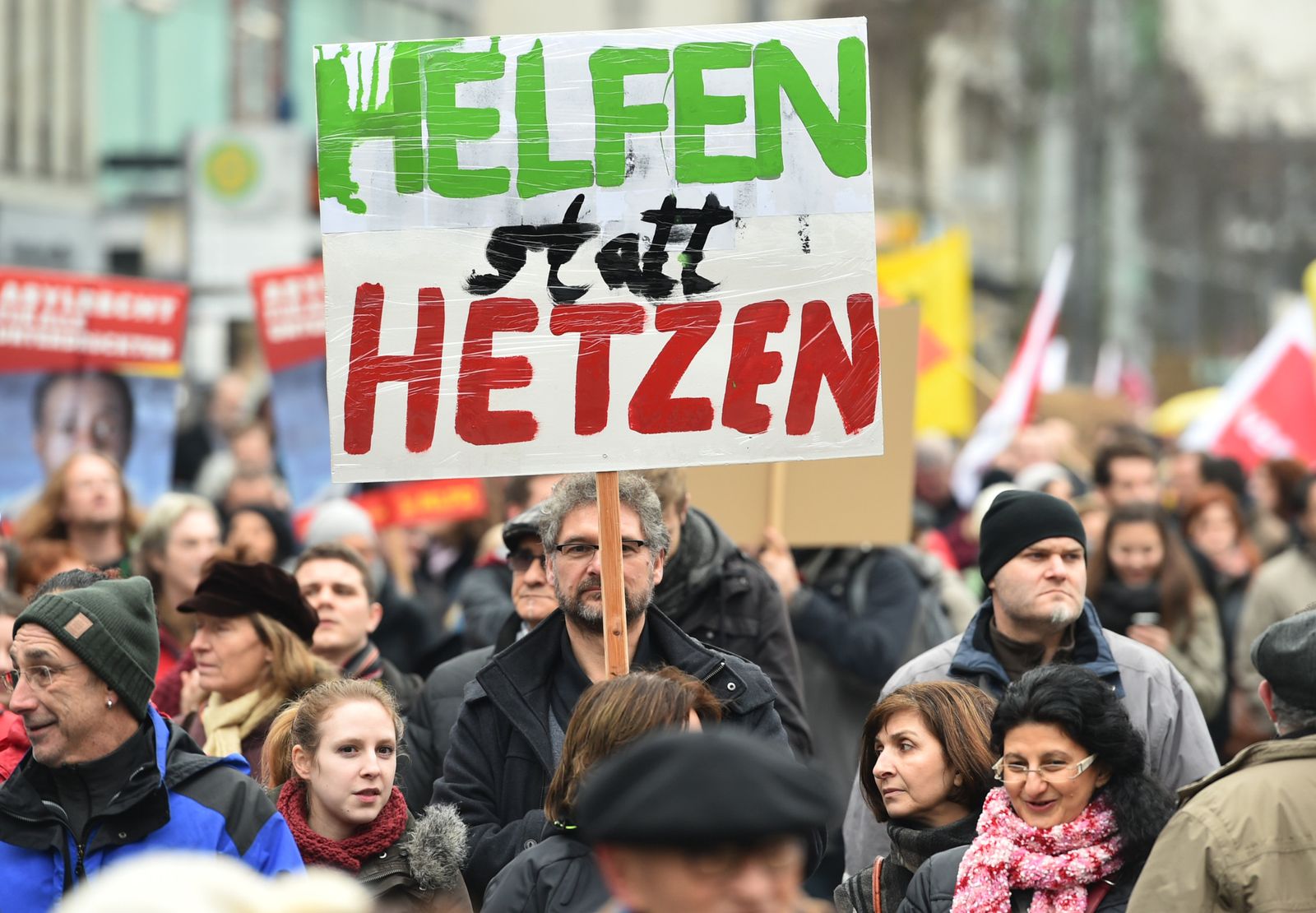 Stop inciting and start helping, reads the sign at this recent pro-refugee rally in Mannheim, Germany.