The euro zone crisis and the questions it has thrown up about Europe's future integration and institutional shape have understandably come to dominate the debate over Europe over the past few years. But the imperative to save and spend smarter may provide an incentive to reinvigorate the discussions about more cooperation in defense and security matters -- especially when it comes to the pooling and sharing of military assets. Moreover, we should talk about the crisis of confidence over the massive surveillance activities of British intelligence.

While large segments of British society have grown weary of Brussels and everything it is presumed to stand for, with politicians catering to and reinforcing this weariness, many Europeans are starting to wonder aloud whether the UK really is an indispensable part of Europe -- or whether it would not be better to part ways in an amicable fashion.

This is a dangerous dynamic, to say the least. Some of the criticism directed at London from the continent has been understandable. After all, while all hands have been on deck to save the euro, and with it European integration, some opinions voiced from Britain have not been constructive at all. At the same time, however, Europeans on the Continent have to recognize the very particular nature of public opinion in Britain, and they should recognize what Britain can bring to the table.

The biggest countries in the European Union have always had different ideas about the shape and the purpose of the EU. But until the crisis exposed the fundamental flaws in the construction of the EU and the euro zone, it was comparatively easy, albeit sometimes ugly, to bridge these differences. No longer. The debate about how much Europe we need, in terms of institutional cohesion and the transfer of sovereignty, in order to emerge from the crisis and to build a foundation for a functioning Europe of the future is also a debate about whether Britain will continue to be a part of a EU.

Zeroing in on Areas of Mutual Interest

We don't know how this will play out over the coming years. But there is a real risk of a British exit from the EU if no middle ground can be found. Under these circumstances, it is all the more important to zero in on issues where our mutual interest overwhelmingly calls for closer cooperation, not alienation. Foreign and defense policy is one of these areas.

At first, that might seem counterintuitive. After all, foreign and defense policy has been dominated by national policies and concerns, and has been characterized by a lack of joint European progress. Take defense procurement, for instance, where vested interests reign supreme, from the contractors to the armed forces and politicians.

It is true that European states have different strategic cultures and priorities, that they put different emphases on the importance of security policy and that they are reluctant to create dependencies on others in this field. Simply put, it is remarkable how little bang Europe is getting for the buck it pays on defense matters. Thus, common European foreign and defense policy looks to be even messier than European affairs in other policy areas.

And yet, it is not altogether unrealistic to expect much deeper and more meaningful defense cooperation in Europe in the foreseeable future. Those who merely consider concepts like "Smart Defense" and "Pooling and Sharing" -- old ideas somewhat repackaged -- underestimate the pressures bearing down on the European defense establishment.

Three structural changes have given significant impetus for a concentrated shift from the idea of defense cooperation as a political vision to defense cooperation as a pragmatic necessity. First, the defense sector is feeling a tightening of financial screws. Second, at the same time, greater demands are being placed on the armed forces, which will only further increase as the United States continues to "rebalance toward the Pacific, putting even greater pressure on Europe to be able to operate effectively in its own neighborhood should a crisis occur. Finally, the unpredictability of the future security environment will require greater coordination and effectiveness from European forces.

In other words, given the financial constraints in all the European countries, combined with the greater demands on European defense, Europe's ability to act can only be guaranteed if there is a will to achieve much closer European cooperation, as no member state is able to maintain the full spectrum of capabilities on its own any more. The Franco-British defense and security treaties testify to this very basic observation, and are a remarkably positive example of what cooperation can achieve.

Moreover, importantly, stronger common European efforts including Britain should be much easier today than in past decades, since strengthening European capabilities or NATO are no longer seemingly mutually exclusive courses of action. Nothing about improving EU capabilities means that our alliance with the US will be any less meaningful in the future. Quite the opposite: The US is making it clear how important a functional and united Europe is for them, too. To quote Vice President Joe Biden, from his speech at the Munich Security Conference in 2013: "(A) strong and capable Europe is profoundly in America's interest, and I might add, presumptuously, the world's interest."

That being said, we should not expect any miracles, let alone steps toward a European army. This does remain a worthwhile long-term objective, but on such an exceptionally loaded and complicated issue, incremental change may be the best we can hope for. This change will be based on a pragmatic and project-based approach, consisting of elements of cooperation, prioritization, and specialization. At first, it will focus on the areas of education and training, logistics and maintenance, with more critical areas following. Should Europe ever move ahead decisively on defense matters, the impulse will have to come from the very top, with leaders taking truly game-changing decisions on the scope and depth of cooperation.

It goes almost without saying that any such attempts to pool and share (more) military assets in Europe would be unthinkable without the strong involvement of the United Kingdom. On the contrary, here Britain could be one of the motors, forcing, for instance, Germany to pay more attention to security policy. British-German bilateral defense cooperation, which is remarkably underdeveloped, would get a boost along the way.

If defense cooperation in Europe is hardly conceivable without an important British role, this is even more the case when it comes to foreign policy and a strategic global outlook in a more general sense. We are all aware that the relative importance and clout of European states in the world will continuously diminish over the coming years and decades.

We will either act largely together or be largely irrelevant -- dependent on the United States to safeguard a liberal international order. If Europe is to play the role of a major global player that is able to defend its interests and values in an increasingly complex and complicated multipolar international order, Britain will have to be an essential part of that.

Reigning In the Spooks

Also, Britain ought to be an essential part of the efforts to restore trust in both trans-Atlantic and intra-European affairs with respect to mutual spying. Much of the German outrage may have focused on the United States and the NSA's tapping of Chancellor Angela Merkel's phone. However, Germans also took note of the GHCQ's activities. Britain will have to play a convincing and constructive role in the debates about a European no-spy agreement. Clandestine services of EU states should have to respect the privacy of all EU citizens.

In terms of the larger defense policy questions, while there would be some advantages to having a smaller, more cohesive and more integrated Europe, a British exit from Europe would severely hamper the Continent's global outlook. Britain's experience in diplomacy and international affairs, including its seat in the UN Security Council, its able military, its championship of free trade, and its function as a bridge over the Atlantic are critical assets.

Without them, Europe in the future would likely take a more narrow, inward-looking, maybe even protectionist perspective, which would not be advisable. In the words of German journalist Jan Ross, the European Union without the UK would be a "Europe with a shrunk horizon."

However, Britain stands to lose even more than Europe should it opt for a course outside of Europe. Independence from Brussels may feel liberating for some time, but, in the medium and long run, it would severely harm Britain's prosperity. Polish Foreign Minister Radek Sikorski, who was a war and foreign correspondent for various UK media organizations such as the BBC and the Telegraph between 1986 and 1991 and who has developed an intriguing and welcome habit of publicly speaking his mind to some key EU countries, put it this way in a speech at Blenheim Palace in September 2012:

"Your interests are in Europe. It's high time for your sentiments to follow. Your leaders need to make a more vocal case for your European interests. … You could, if only you wished, lead Europe's defense policy."

Indeed, Britain could. And, hopefully, not too far into the future, it will.

This text has been excerpted from the new book "Common Destiny vs. Marriage of Convenience -- What do Britons and Germans want from Europe?" by the British-German KE7 foundation. 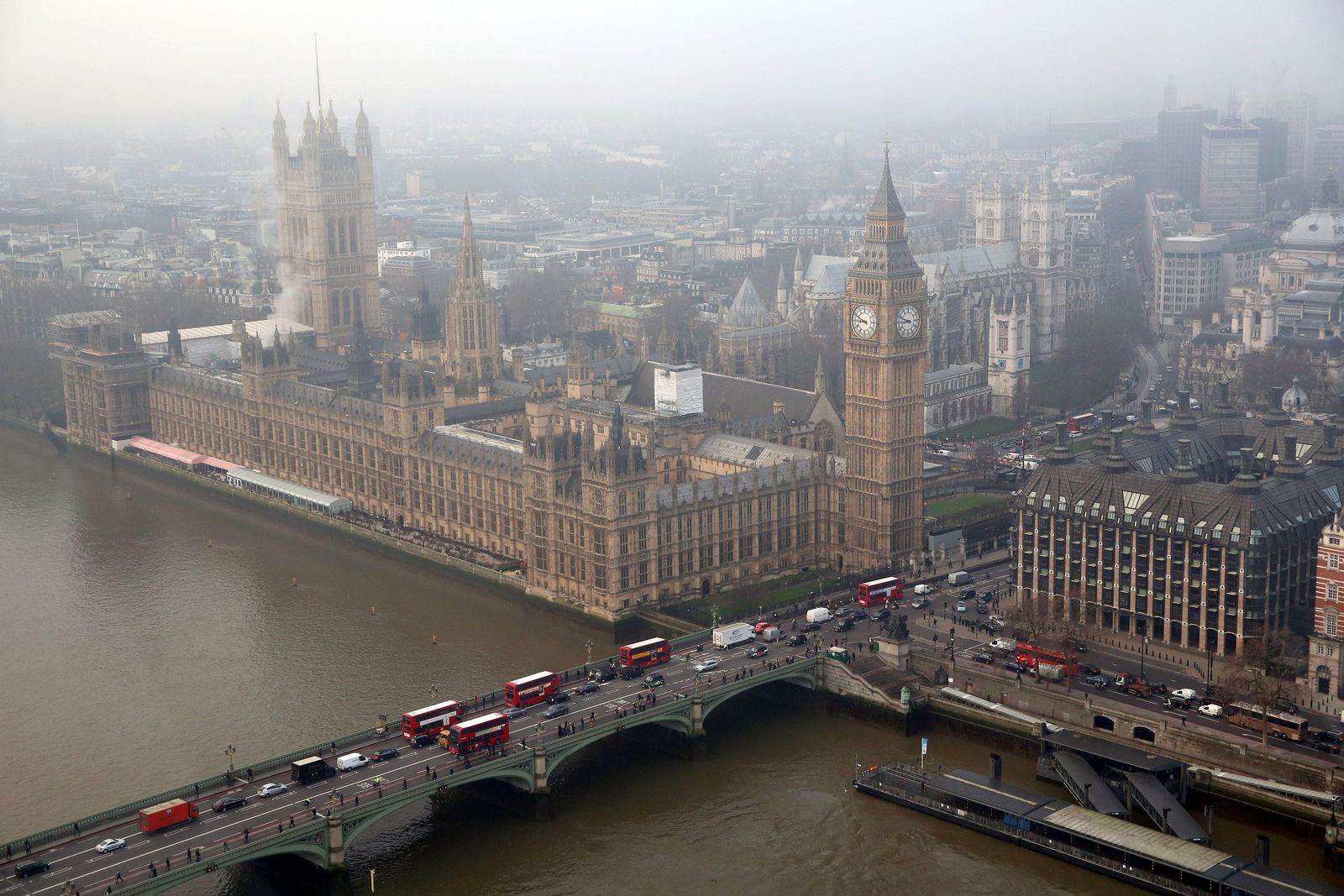 The Thames River and Houses of Parliament in London