The sentence was a gift for euroskeptics in Britain. "Suddenly Europe is speaking German," said Volker Kauder, floor leader for German Chancellor Angela Merkel's conservative Christian Democratic Union, at the CDU party congress in Leipzig. The British press eagerly jumped on the soundbite on Wednesday, seeing it as confirmation of the old prejudices about Germany's supposed thirst for power.

"Europe speaks German now!" was the headline in the tabloid newspaper Daily Mail, complete with fat exclamation points. "Controversial claim from Merkel ally that EU countries all follow Berlin's lead -- and Britain should fall into line," the paper continued in outrage. But the consensus of the conservative British press was that such a thing would, of course, never happen. Instead, so the euroskeptics argued, British should take advantage of the euro crisis to "free" itself from the EU.

The Kauder controversy is the latest indication of a growing rift between Berlin and London. On the British side, Business Secretary Vince Cable added fuel to the fire on Wednesday in connection to a proposed European Union tax on financial transactions. Cable described the so-called Tobin tax, which Germany has been campaigning for, as "completely unjustified." Kauder, meanwhile, had earlier criticized British opposition to the tax as irresponsible.

Things are not running smoothly between Berlin and London. And the timing of the conflict is far from ideal. On Friday, Chancellor Angela Merkel and Prime Minister David Cameron are due to meet in Berlin. Given that Europe is in the middle of a crisis of historic proportions, they will have a lot to discuss.

But even at the highest level, the two countries are not singing from the same song sheet. On Monday, Merkel and Cameron both happened to hold keynote speeches on Europe -- and their messages couldn't have been more different.

"Merkel: More Europe, Cameron: Less Europe," was how Benedict Brogan, deputy editor of the Daily Telegraph, pithily summed up the speeches. Merkel, speaking at the CDU party congress, called for the European Union to be deepened step by step. Meanwhile, Cameron, talking at a banquet in London's financial district, said he would use the crisis to claw back power from Brussels. In doing so, he was echoing a central demand of the euroskeptics in his Conservative party.

When Cameron travels to Berlin to meet with Merkel, the battle lines will be clear. During the current crisis, the old EU tension between the federalists and the so-called intergovernmentalists -- who want power to remain in the hands of the national governments -- has broken out once again. In his speech on Monday, Cameron said that the EU needs "the flexibility of a network, not the rigidity of a bloc." In contrast, Merkel and French President Nicolas Sarkozy have been campaigning for a "core" Europe consisting of the 17 euro-zone countries.

The former Tory adviser and Times columnist Daniel Finkelstein compared the two different philosophies with the rivalry between Apple and Microsoft. Steve Jobs, Finkelstein wrote, had set out to create a "beautiful" integrated system, with control of both hardware and software, while Microsoft preferred an "untidy alliance," with its programs running on other manufacturers' computers. Microsoft products may not look so perfect, Finkelstein writes, but they are ultimately superior.

In the midst of the euro-crisis, however, the Microsoft model is currently on the defensive -- which is one reason why the warnings from London sometimes sound so shrill. The British are watching in alarm as Continental politicians push for further integration of the euro zone right before their eyes. The Cameron government faces a dilemma. On the one hand, they want to keep the greatest possible distance between Britain and the euro crisis. At the same time, they are insisting on their right to have a say. After all, what's being discussed is a change in the very nature of the EU, and the UK is still one of the big three in the bloc.

Britain's special status was one of the anomalies in the old EU. Germany and France made many concessions to the British, who were determined to preserve their independence. Again and again, exceptions were made when the battle lines hardened.

But, this time around, it's hard to see how a compromise can be found. The euro zone's instinct for self-preservation means that British concerns are being given low priority. Merkel is calling for a speedy change in the EU treaties in order to create a legally sound basis for an economic government in the euro zone. Cameron, however, is opposing the idea, fearing a cementing of the two-speed EU. In addition, his party would expect a referendum in that case, and Cameron is worried that he might not be able to keep the ensuing domestic political debate under control.

The debate in Britain is being almost completely dominated by the euroskeptics, even though all three major parties in the House of Commons continue to officially support Britain's continued status as a member of the EU. Amid the general atmosphere of hostility, the only well-known politicians who still have warm words for Europe are Deputy Prime Minister Nick Clegg, leader of the Liberal Democrats, and former Foreign Secretary David Miliband, of the Labour Party.

An Increasingly Tight Spot for Cameron

Clegg made an appearance in the House of Commons this week to bring the dreamy euroskeptics back down to reality. "The idea that one could simply get on to the Eurostar, go over to Brussels and come back with a bag-load of powers simply is not feasible," he said. He then proceeded to warn his coalition partner, David Cameron, that only the "populists, chauvinists and demagogues" could benefit from this type of debate.

Cameron, meanwhile, appears to be increasingly influenced by the euroskeptics. Indeed, he and George Osborne, his chancellor of the exchequer, bear some of the blame for the fact that the euroskeptics within their party's ranks have been able to show more and more confidence. In recent weeks, they have repeatedly said that the euro zone was responsible for the fact that British economy is not growing. They have used the debt chaos on the other side of the English Channel as a scapegoat in order to dispel doubts about their own cost-cutting policies.

Fresh data on Britain's weak economy are published on an almost daily basis. And every time this happens, opposition leaders and economists call for the austerity measures to be abandoned. But Osborne refuses to stray from his course, and when he delivers his budget speech at the end of the month, he will most likely announce that the belt-tightening approach will continue. The euro zone will once again be forced to serve as the alleged cause of the country's stagnant economy.

Merkel's and Sarkozy's reactions to the criticism coming out of London have been increasing thin-skinned. At the most recent EU summit, Sarkozy's comment about Cameron -- that he was "sick of him telling us what to do" and that Cameron had "lost a good opportunity to shut up" -- came from the heart.

But Chancellor Merkel will probably be a bit more diplomatic on Friday. She knows she'll need Cameron on her side if she is going to be able to push through an amendment to the Lisbon Treaty, given that changes must be unanimously approved by all 27 EU member states.

On Thursday, she appeared to strike a conciliatory note. "We want a Europe with Great Britain," she said at a conference in Berlin. One would have to handle the process of further European integration with great political sensibility, she added.

Cameron, for his part, is in a rather tight spot. He's hardly in a position to deny Merkel's wish flat-out because Britain also has an interest in having a functioning euro zone. And he clearly doesn't have an alternative vision of Europe except the status quo, which is untenable. Cameron's talk of a networked Europe is "purest waffle," writes Timothy Garton Ash in the Guardian.

Some British observers feel that Downing Street is anxious to tone down the rhetoric ahead of the meeting. "It's an important meeting but it's not a showdown," one member of Cameron's team said, as quoted by Benedict Brogan of the Daily Telegraph. "The relationship between the prime minister and Mrs Merkel needs to be a constructive one."

The question is whether Merkel will try to meet him somewhere in the middle, for example, by abandoning her efforts to introduce a financial transaction tax. In any case, it looks like Berlin is keen to present an image of unity on Friday: The Germans have overruled British objections and are insisting on a joint press conference. 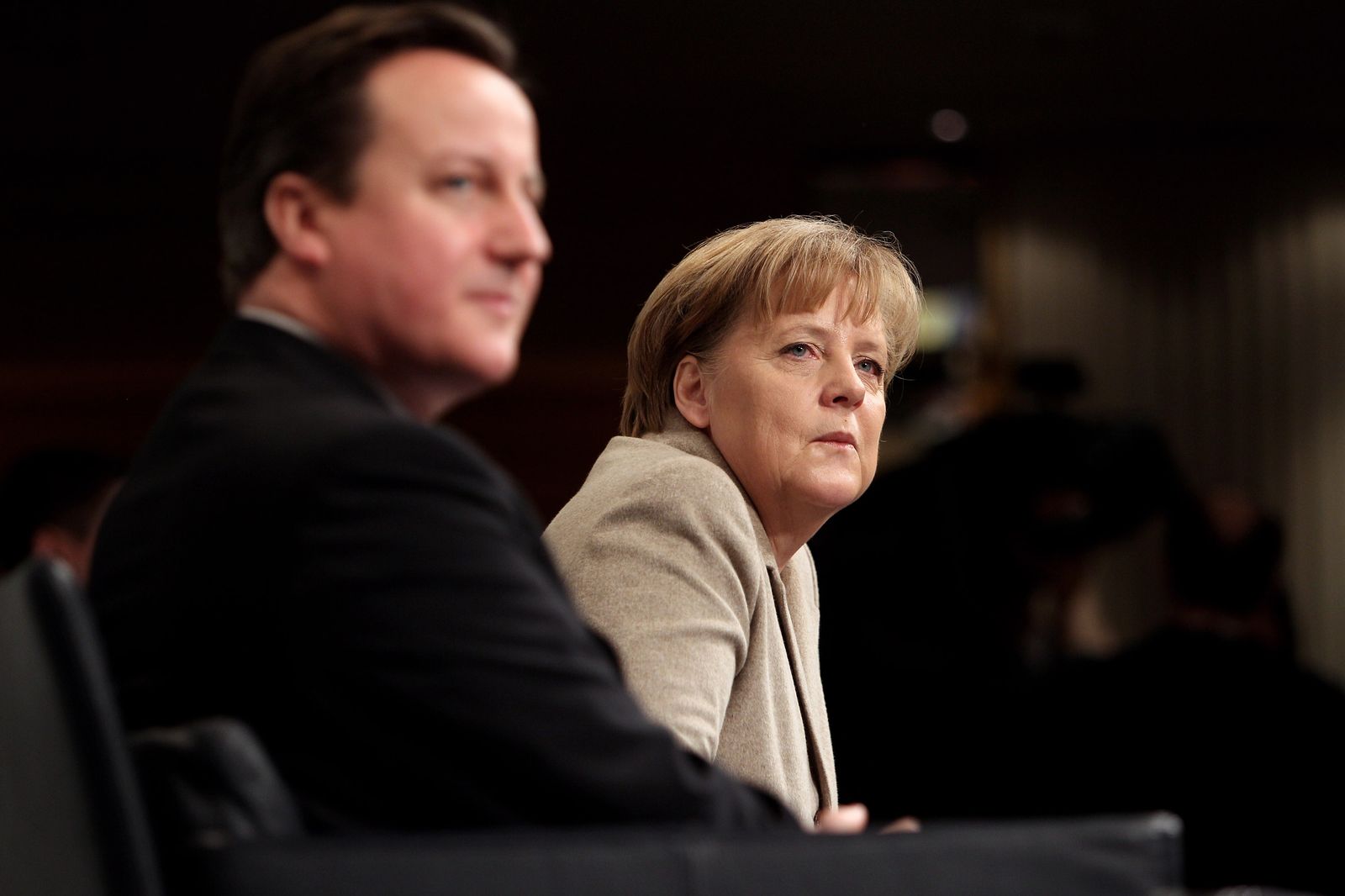 Nerves are frayed between Britain and Germany ahead of David Cameron's meeting with Angela Merkel on Friday.