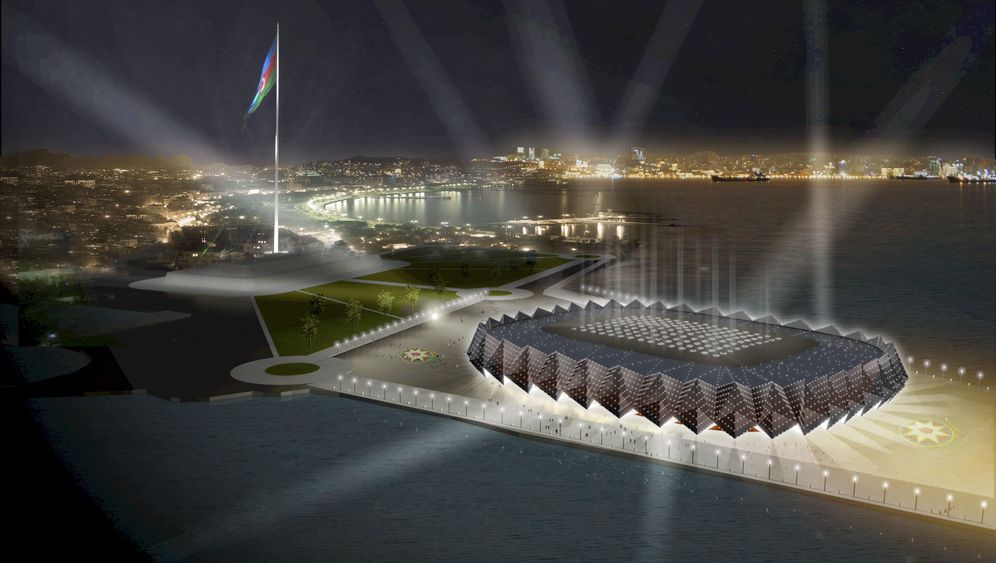 Photo Gallery: The Grand Prix in the Glass Palace

SPIEGEL ONLINE: Ms. Deltenre, in 2010 the general assembly of the European Broadcasting Union (EBU), which organizes the Eurovision Song Contest, agreed to a resolution in Baku condemning the arrests and intimidation of journalists in Azerbaijan and calling on the authorities to take action against abuses. Two years later, have those demands been met?

Deltenre: Now, as before, there is intimidation of journalists, which shows that there is still a long way to go.

SPIEGEL ONLINE: Did the statement have any kind of impact at all?

Deltenre: How does one measure a positive effect? Last Wednesday, we held a conference here in Geneva regarding media freedom in Azerbaijan. That the government, represented by presidential advisor Ali Hasanov, participated, that they sat down at the table with Azerbaijani and international non-governmental organizations and were willing to discuss every critical issue, shows a great willingness to open a dialogue. A dialogue is always a good first step in the right direction.

SPIEGEL ONLINE: Participants see it differently. Human Rights Watch says, for example, that you offered the government a podium. The EBU has not "explicitly, clearly and openly commented on the deteriorating situation of media freedom in Azerbaijan," it claims, which therefore calls into question their commitment to these principles. Azerbaijani human rights activist Rasul Jafarov says that he has the feeling that the EBU is working for the government in Baku, Azerbaijan's capital.

Deltenre: I find that incomprehensible. For me it was important that the government was there because it gives the event a whole other level of gravity and credibility. As a result, the government said that it considered the smear campaign against critical journalist Khadija Ismailova to be a "blemish," and that officials are doing what they can to clear it up. And we have agreed on very concrete activities for the national public broadcaster, Ictimai, such as workshops led by us showing how one can increase the plurality of opinions in programming.

SPIEGEL ONLINE: Even this training idea had already been included in the EBU's 2010 resolution. We are talking about minimum standards and pronouncements that the Azerbaijani government routinely repeats.

Delterne: No, it will happen. But the EBU is composed of 56 countries. We have been very active since 2010, but our focus was not only on Azerbaijan. Quite a bit of management resources and attention were committed to the Arab Spring (since broadcasters in Egypt, Libya and Tunisia are members of the EBU).

SPEIGEL ONLINE: Critics say that the programming of Ictimai, which will host the Eurovision Song Contest this year, is so one-sided and close to the government that the station violates EBU rules. Do you review the programs of your members?

Deltenre: Not systematically, but we do when we get concrete tips. At one point we had Egyptian programming monitored, and we have also done that in the case of Ictimai.

SPIEGEL ONLINE: With what outcome?

Deltenre: For us it was clear in this context that we would therefore offer Ictimai more journalistic training.

SPIEGEL ONLINE: So that mean that the outcome left much to be desired.

Deltenre: Yes, but the same thing also applies to other countries.

Deltenre: When it comes to freedom of expression and freedom of the press, it is often the government and not the station that is the problem. You have to discern what an EBU member, a station, can do in a country. I now speak not only of Azerbaijan, but I also talk about Belarus, where the government has absolutely no interest in the development of real journalism. The basic idea of the EBU is one of solidarity and not exclusion. The EBU believes that in the long run, continuous work and constant dialogue leads to improvement.

SPIEGEL ONLINE: Jørgen Franck, Eurovision's television director, says "we stand for change for the better and for democratic rights. That's what we fight for in Europe. But we don't actively participate in the process, that we leave to others." Can you explain that?

Deltenre: Franck is responsible for the Song Contest. He is talking about the ESC, and not the EBU. The ESC is an event with a long tradition and clear rules: Whoever wins is next year's organizer. As long as I am here, we will not change this rule. If we politicize the ESC and treat some members as second-class citizens by telling them they cannot play host because what is playing out in their country doesn't exactly live up to our standards, the ESC would be dead. It is an event that builds bridges. But that does not mean that, as an institution, we cannot have clear ideas about what a functioning democracy should encompass -- namely an independent and diverse media.

SPIEGEL ONLINE: So the Eurovision Song Contest can then take place in any country, regardless of its political system?

Deltenre: Yes. In any member country.

SPIEGEL ONLINE: Even in Belarus.

Deltenre: This is definitely the Union's position today.

SPIEGEL ONLINE: The EBU has recently itself mentioned that the Song Contest even took place in 1969 in Spain under Franco. What is the message deliberately being expressed, that the ESC has no fear of rapprochement?

Deltenre: The ESC is a television event that will bring people together and not exclude anyone. It is an integrating event, not an exclusionary one.

SPIEGEL ONLINE: The EBU has received guarantees from the Azerbaijani government that it will respect the Human Rights Convention during the scope of the Song Contest and ensure the freedom and safety of all participants and reporters. Isn't that cynical? Creating an artificial mini rule of law in a country, where the law is otherwise not respected?

Deltenre: I could understand the criticism if it were true. Azerbaijan, as a member country of the Council of Europe (the human rights organization that has 47 member states that are bound to respect rulings by its European Court of Human Rights), has signed the European Convention on Human Rights, which applies to the whole country.

SPIEGEL ONLINE: Why, then, do you have to ask for another specific guarantee?

Deltenre: I cannot legitimately demand security for a whole country that has 9 million inhabitants. I can only ask that the event takes place in a secure setting. And that the safety of all those who participate is guaranteed.

SPIEGEL ONLINE: So it would not matter to the ESC if anti-government protesters were arrested in Baku in the next few weeks as long as no Song Contest participants or visitors were involved?

Deltenre: I am assuming that those who abide by the laws will be allowed to protest peacefully.

SPIEGEL ONLINE: Do you support the music festival called "Sing for Democracy" being organized in parallel by critics of the regime?

Deltenre: In no form. We are neutral here.

SPIEGEL ONLINE: At the same time, the ESC takes on the role of spokesperson for the Azerbaijani government over and over again when your representatives rave about security in Baku or assert that people whose homes were demolished because they stood near the newly built Crystal Hall that will host the event were properly compensated.

Deltenre: I don't know if the settlement was reasonable, so I cannot comment on that. That is something the non-governmental organizations will need to clarify with the government.

SPIEGEL ONLINE: Do you see a threat that the EBU's image will suffer?

Deltenre: I don't believe at all that the image of the EBU will be damaged in the slightest because the European Song Contest is taking place in Azerbaijan. The event presents an opportunity for many countries to bring attention to themselves. All those who participate, not just Azerbaijan, use it to show themselves in the best light. And that is legitimate. We have the Eurovision Song Contest to thank for the fact that we are now doing this interview and that you are interested in human rights in Azerbaijan and in the EBU.

11 Bilder Photo Gallery: The Grand Prix in the Glass Palace