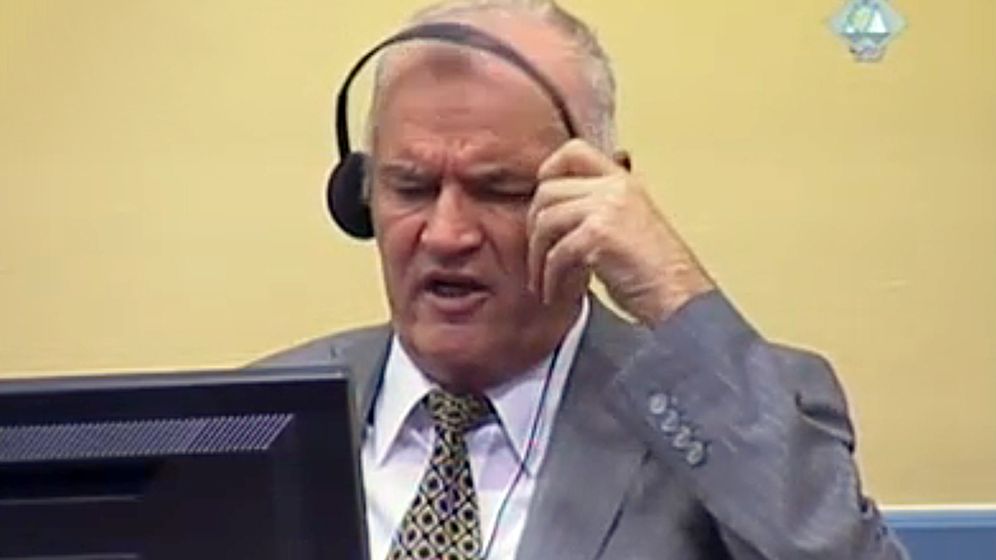 Even at The Hague, justice doesn't always focus on existential questions. Sometimes it's about something as simple as a hat.

When accused war criminal Ratko Mladic arrived for his arraignment at the United Nations Yugoslav war crimes tribunal around 10 a.m. on Monday, presiding judge Alphons Orie asked him to remove his gray cap. But the 69-year-old, who is accused of orchestrating some of the worst Serb atrocities of the Bosnian War, silently refused. Several times.

After the judge ordered security to help Mladic remove the hat, he complained that he was a sick "old man" and needed it to keep his head warm. But Orie countered that the court had already determined the defendant was fit to stand trial. If new findings revealed that wearing a hat in the courtroom would be necessary, certainly they could find a solution, the judge said before demanding that the proceedings begin.

Chaos in the Court

But Mladic seemed uninterested in taking part, repeatedly interrupting the judge and provoking the audience of victims' relatives with glances and gestures that included a military salute. He also demanded the opportunity to choose his own lawyer, refusing to speak further while being represented by court-appointed counsel.

"You are trying to impose impossible conditions on me -- a lawyer I do not want," he said, according to news agency AP.

Despite Orie's repeated attempts to quiet the defendant's resistance, when the judge began reading the charges against him Mladic shouted: "No, no, no! Don't read it to me, not another word," proceeding to pull off his headphones and sit back in his seat defiantly.

As security approached to remove Mladic at Orie's request, the defendant continued shouting. Meanwhile such a level of tumult had spread throughout the audience that an alarm sounded, sending security into the aisles. For a moment chaos took over the court.

But the turmoil calmed as quickly as it erputed. The pause in proceedings briefly distracted from the monstrous crimes which are to come under scrutiny in Room 1 of the war crimes tribunal.

Among other charges, Ratko Mladic stands accused of:

On Monday, the ex-general was removed from the courtroom before entering a plea, a task the court assumed for him. Orie pled not guilty to all charges on his behalf.

"He showed who he is and what he is like. He displayed no regret and doesn't want justice for the victims," said Hatidia Mehmedovic, a Srebrenica massacre survivor.

The tribunal now plans to review the qualifications of the lawyers Mladic has chosen. Should they be approved, they will need ample time to prepare for the complicated case. It is likely to be a while before the former general, who is currently sitting in custody in Scheveningen, makes his next public appearance. Perhaps even a long while.