One way to look at Alexis Tsipras, the 37-year-old wunderkind of the Greek left, is as the leader of a small yet rapidly growing political party on the edge of Europe -- a party that stands to attract some 3 million votes in Sunday's election. Three million votes out of a European Union population of a half billion. Just over half of 1 percent.

There is another way to look at Tsipras, however -- as the European politician who, perhaps more than any other, holds the fate of the European common currency in his hands. It is this second interpretation that has the entire world gazing with fear as Greeks head to the polls this weekend. Tsipras, after all, has promised Greece that he will abandon the deep austerity measures imposed by the EU in exchange for bailout aid -- with Brussels threatening to suspend those payments, and send Athens into bankruptcy, should he do so. It is a game of political chicken that could bring down Europe.

Central banks around the world are preparing for the potential financial earthquake that could accompany a victory of Tsipras' Syriza party. Reuters reports on Friday that central banks in Britain, Canada, Japan, China and India are all working on contingency plans or have said they are prepared to take measures to counter any financial market turbulence that could result from the vote.

European Central Bank head Mario Draghi said on Friday that the ECB is ready to provide further liquidity to euro-zone banks. "The ECB has the crucial role of providing liquidity to sound bank counterparties in return for adequate collateral," he said. "This is what we have done throughout the crisis … and this is what we will continue to do."

A Syriza victory is far from a foregone conclusion. Greek election law forbids the publication of public opinion polls within two weeks of a vote, but the most recent surveys indicated that the leftist party is running neck-and-neck with the conservative New Democracy party, which is in favor of the euro bailout package and the austerity measures that accompany it. Indeed, many see the vote as a kind of referendum on whether Greeks wish to remain a part of the euro zone.

Given the uncertainty, the European Union has shown signs of backtracking on its tough love. Earlier this week, reports emerged that Brussels was considering watering down the austerity measures that have been imposed on Athens -- measures that have wreaked havoc on the country's economy. The Financial Times Deutschland cited unnamed EU sources on Wednesday as saying that a renegotiation of conditions was unavoidable if Greece were to remain in the euro zone.

French President François Hollande, however, warned Greeks this week not to count on a softening of conditions. Speaking on Greek television, he said: "I have to warn them, because I am a friend of Greece, that if the impression is given that Greece wants to distance itself from its commitments and abandon all prospect of recovery, there will be countries in the euro zone which will prefer to finish with the presence of Greece in the euro zone."

The fear of just such a scenario is palpable -- and it is largely the fear of the unknown. Nobody knows what the effects of the election might be, and it is unclear what a Greek exit from the euro zone would mean for the common currency. But it isn't likely to be good.

Already, depositors are rapidly moving their money out of Greece. Capital outflows are now well more than €500 million each day, with €10 billion having been pulled out of Greek banks since early May. Analysts have dubbed it a "bank jog," but should Syriza emerge victorious on Sunday, it could turn into a trot, or even an out-and-out sprint. An unnamed euro-zone official told Reuters that Brussels is concerned about such a scenario. "It's not even about a bank run on Monday morning after the elections," the source told the news agency. "People can now log on to Internet banking and make transfers on Sunday evening, as well."

Still, even if all goes well in Greece on Sunday, Europe is far from out of the woods. Indeed, zero hour would appear to be approaching on several euro-zone fronts this summer, with both Spain and now Italy showing signs of having caught the euro bug. Not quite one week after Spain requested €100 billion from the euro backstop fund to prop up its banks, interest rates on the country's sovereign bonds have soared, and ratings agencies have slashed the country's rating. On Thursday, rates on Spanish 10-year bonds hit an all-time euro-era high of 6.96 percent, just shy of the 7 percent mark that drove Greece, Ireland and Portugal to scream for emergency aid.

Italy, too, is finding itself at the mercy of the financial markets this week. With investors more unsettled than calmed by the handling of Spain's banking crisis, Rome on Thursday had to pay 6.13 percent interest on 10-year bonds. "The European banking system is paralyzed," Nicolas Veron, a senior fellow at the Bruegel think tank in Brussels, told the Associated Press. "So many banks hold massive amounts of Spanish and Italian government bonds that are losing value. We no longer have a functioning interbank (lending) market in the euro zone."

Both Spain and Italy, in concert with France, are insisting that the euro zone must quickly come up with a plan to spread liability. Ideas supported by Rome, Madrid and Paris include the issuing of joint euro-zone debt in the form of euro bonds and/or European-wide guarantees on bank deposits. Chancellor Angela Merkel, however, has staunchly refused for fear of further exposing Germany and placing a greater burden on German taxpayers.

Indeed, Merkel went so far this week as to warn that Berlin could not solve the crisis by itself. "Germany is strong," Merkel said on Thursday, but the country's strength is "not unlimited."

Still, Merkel is likely to face some pressure in the coming weeks to do more to prop up the common currency. On Sunday evening, she travels to Mexico for a G-20 summit. Next Friday, she will join Italian Prime Minister Mario Monti, Spanish Prime Minister Mariano Rajoy and French President Hollande in Rome to prepare for the upcoming EU summit at the end of June. In all of those meetings, she will encounter pressure to abandon her refusal to consider euro bonds and deposit guarantees.

The European Union, as reported in SPIEGEL this week, is working on a plan to outfit the euro with the kind of political union necessary to solidify the common currency. But with the crisis reaching yet another apex as early as Sunday evening, the promise of future stability might not be enough. 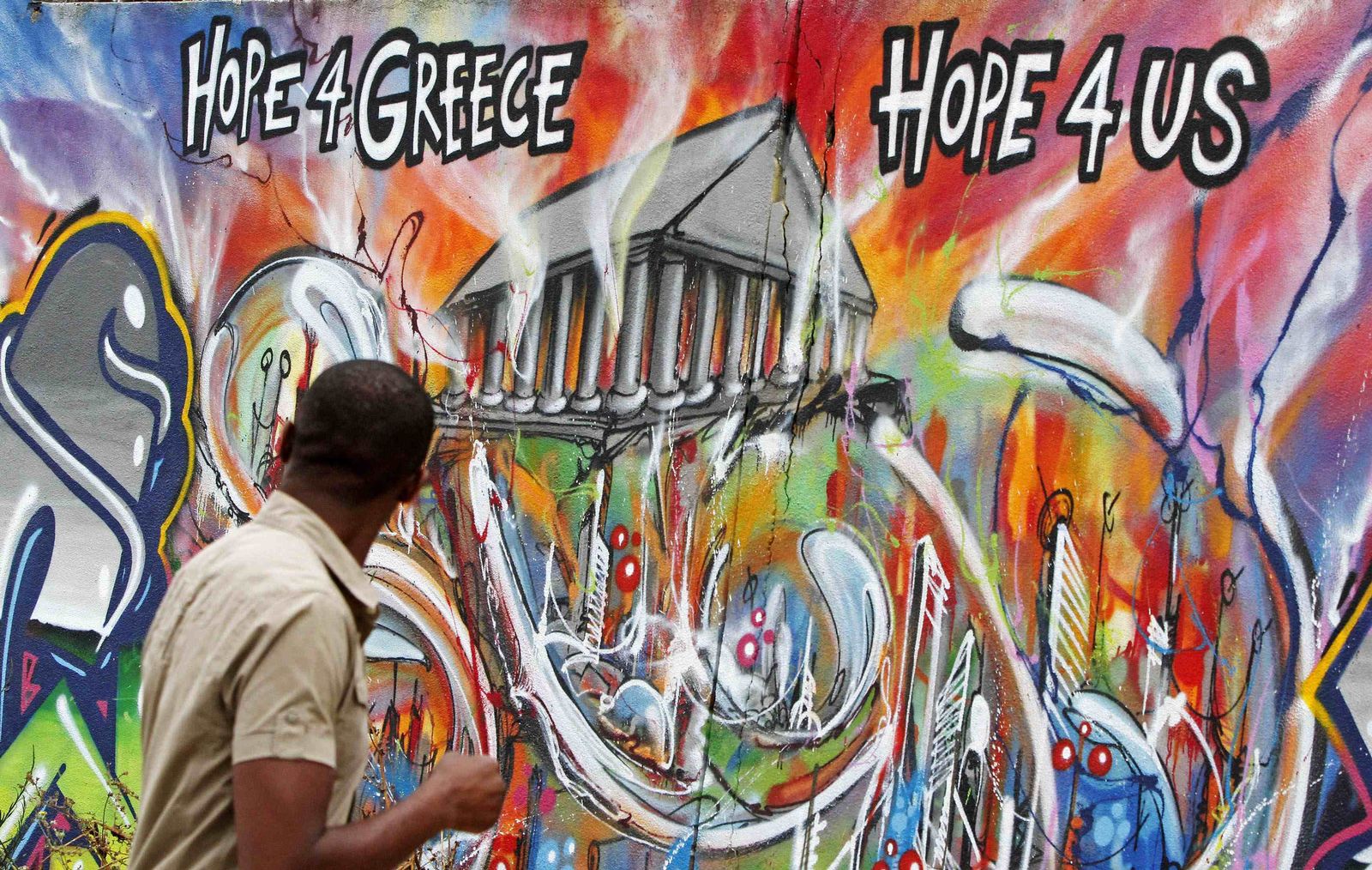 In Europe, all eyes are on Greece this Sunday. Here, a man walking past graffiti in Lisbon.