The announcement over the weekend that Cyprus would impose a tax on bank accounts as part of a €10 billion ($13 billion) bailout sent shock waves across the Continent, causing the euro to fall and rattling stock markets worldwide.

The measure marks the first time that ordinary depositors in a euro-zone country have been called on to help bear the cost of a bailout. It stipulates that some €5.8 bíllion must be collected through a one-time levy on their savings.

Euro-zone finance ministers and the International Monetary Fund reached the deal with Cyprus, which faces bankruptcy in May, early Saturday morning after months of fraught negotiations.

Parliament is scheduled to vote Monday afternoon in Nicosia, the Cypriot capital, on whether to approve the bailout, which has met with public outcry. If the deal is struck down, state media say banks could be closed on Tuesday to avoid mass withdrawals.

German commentators on Monday question whether the bailout model was the right decision.

"Bankruptcy or bailout? This question has defined the debate about Cyprus for months. Now the finance ministers have chosen the middle ground, a path that not only breaks European Union rules, but is also extremely risky. Bankruptcy for Cyprus -- as provided for by European treaties for non-system relevant countries -- would have been painful for the people of the island, but nevertheless clearly identifiable as an isolated decision. It would have been clear to everyone that this solution was not an example for other problem countries such as Spain or Italy, which are obviously system-relevant."

"Now Cyprus will be bailed out with €10 billion, but bank customers must simultaneously make a large contribution. There may be good reasons for this, but it will frighten depositors across southern Europe. Who's to say that Spanish and Italian banks won't follow the Cypriot model at some point? … One can't blame a Spaniard for preferring to keep his money under the mattress -- which will only intensify the banking crisis there too."

"Now Cypriot banks too must be carved up. That was something to be feared, ever since the rescue politicians started emphasizing how small Cyprus is. Given that amounts in bailout funds and on central bank balance sheets range in the trillions, a loan of €10 billion shouldn't carry so much weight, it is said. That is probably true, but it doesn't inspire much confidence. Because if Cyprus is so insignificant, how can the small island be a systemic risk for the entire continent?"

"Anyone who believes nonetheless in Cyprus' systemic risk -- the country has a smaller economy than the tiny German state of Saarland -- will find themselves in a tight spot when it comes time to tell the story of the unconditional preservation of the euro zone, without which Europe will supposedly no longer have a voice in the world. What kind of weight is the euro zone supposed to carry in competition with China, India, America or Brazil when Cyprus has already left it faltering?"

"Banks closed, money gone, confidence destroyed. The last taboo of the euro crisis has been broken, and it's now reaching directly into savings accounts. On Tuesday the Cypriot banks will face turbulence. Greeks and Spaniards who can't get to Switzerland will put their money under their pillows. The crisis surrounding the euro has unexpectedly reached a new level of escalation. German politicians are also to blame -- they are playing a dangerous game."

"On Saturday Cypriot grandmothers, Greek teachers, British soldiers and German professionals found out that part of the savings they've set aside on this small island would be taken away. They found out that Cypriot banks are obviously different than German, Spanish or Irish ones, that throughout Europe different standards apply. And that they were naive to believe in the (legally binding) promise that their savings of up to €100,000 were safe. And that it was downright stupid to hope that shareholders and creditors of high-risk businesses would be liable."

"This poisoned rescue package is completely incomprehensible, considering that the Cypriots -- unlike the Greeks -- can actually pay back their debts. Nicosia is currently opening up a revenue stream that will surely bubble up in 2017: natural gas. The government is ready to pledge one-third of the revenue to the ESM to service the loans. The rescuers didn't want to engage with the idea. Instead, they're willing to accept the fact that for the first time the euro zone could lose a member."

"The compulsory tax is designed to force tax migrants -- particularly those from Russia -- to participate in the bank bailout. In northern Europe -- particularly with Germany heading for autumn elections -- the plan is an easy sell. But there is another problem. Euro Group head Jeroen Dijsselbloem spoke of a unique case, which is true when applied to the bloated nature of the Cypriot banking sector. But the exception is becoming the rule in efforts to save the euro. Last year, private investors were involved in the Greek debt haircut. The measure was described as a unique case."

"The unique exceptions have begun piling up in Europe. That will do little to strengthen foreign investors' faith in Europe."

"The currency union has committed a breach of trust. It weighs especially heavy because the euro states have already secretly been rehabilitating their economies at the expense of depositors. Low interest rate policies help bring down the national debt, but at the same time they gradually deplete the balances of savings and money market accounts. The pensions of many citizens are also dwindling."

"Anyone who now believes they shouldn't be interested in the fate of individual depositors on a remote Mediterranean island is mistaken. Cyprus sets a precedent. What happens there can also happen elsewhere. In Spain and Ireland, bank bailouts have allowed the national debt to explode to an unsustainable level. There, the euro zone could see tapping into bank accounts as the next step. In principle, no European depositor can remain assured that their bank balance will remain untouched -- even in Germany." 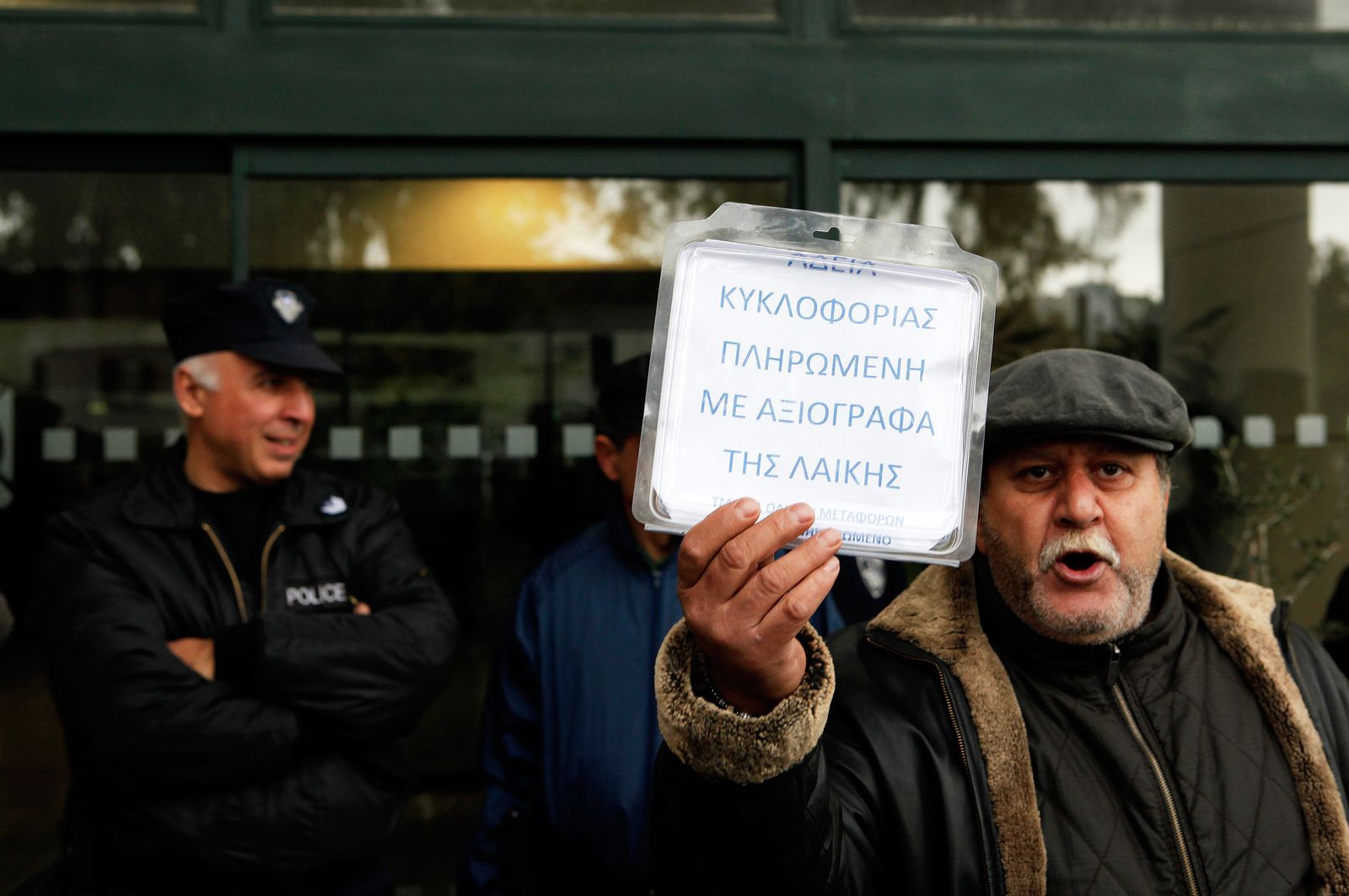 A protest in Nicosia, Cyprus. Public outcry has followed the bailout announcement.