Rigorous attempts by the French government to clamp down on Bastille Day rioting were not enough to prevent at least 317 cars being torched in major French cities in the early hours of July 14. 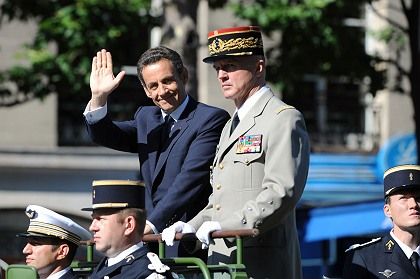 French President Nicolas Sarkozy (L) tries to ignore the morning's uprisings, waving to the crowd during the Bastille Day parade in Paris.

Despite a deployment of 10,000 police officers, the number of cars set alight represents a rise of almost seven percent from the previous year. Youths threw home-made explosives and fireworks to set alight bins and cars, before targeting police officers, 13 of whom were wounded in the riots. A total of 240 arrests were made -- almost double the number recorded in 2008.

It had been hoped that new legislation to allow harsher punishments would deter rioters this year. Now perpetrators can face up to three years in prison and fines of up to €45,000 for their involvement in the arson attacks.

Violence on the eve of Bastille Day has become a tradition in France and an outlet for disaffected young men to express their anger at French unemployment rates and a failed integration policy for ethnic minorities.

Elsewhere in Paris, French troops were preparing for the traditional July 14 military parade down the Champs-Élysées. This year, French President Nicolas Sarkozy will welcome Indian Prime Minister Manmohan Singh as his guest of honor and Indian soldiers will participate alongside their French counterparts in the parade.

The Bastille Day riots follow three nights of anarchy on the streets of Firminy near Lyon, as youths protested amid reports of a 21-year-old Algerian man dying in police custody on Wednesday July 8.

Mohamed Benmouna, who had been arrested on charges of extortion, was reported to have commited suicide, but his family has filed a lawsuit to determine the cause of death. Their pleas for a halt to the violent protests were ignored as local youths set ablaze cars and local shops in clashes with riot police.

More protestors took to the streets of Paris on July 13, claiming police brutality against activist film director Joachim Gatti who lost his right eye on July 8 -- allegedly having been shot by a police flash-ball gun.