As seasoned Mediterranean travelers know, reading menus in the region requires a healthy degree of skepticism. While the list of delicious-looking fish dishes seems endless, many of the tasty treats are actually caught elsewhere, frozen and flown in from abroad. For all its beauty, the Mediterranean is rapidly running out of certain kinds of fish.

According to a new study by the environmental group International Union for Conservation of Nature, the situation could soon get even worse. More than 40 species of fish are at risk of disappearing from the waters of the Mediterranean, including several types of sharks and rays as well as commercial fish such as sea bass and dusky grouper.

The blue fin tuna is particularly endangered, the study found, with populations having declined by 50 percent in the last 40 years -- with much of that collapse having been the result of overfishing. "The lack of compliance with current quotas combined with widespread underreporting of the catch may have undermined conservation efforts for this species in the Mediterranean," said Kent Carpenter, the IUCN study coordinator, in a press release.

According to the report, which was presented in the Swiss town of Gland on Tuesday, almost half of the Mediterranean's 76 species of sharks and rays are considered threatened or endangered. Twelve types of bony fish -- species with a spine made of bone instead of shark-like cartilage -- are likewise in trouble.

The report cites the use of trawling nets -- as well as the illegal use of driftnets -- as a major reason for the unhealthy Mediterranean fishery. In addition to scooping up commercially valuable fish, the nets also capture threatened species and other marine life, such as dolphins, turtles and birds.

In addition, environmental groups and scientists have long said that catch quotas set each year are too high to allow fish stocks to maintain health. And there is widespread disregard of those quotas, which has led to a tightened European Union inspection regimen in recent years.

The report by the IUCN, which regularly publishes a so-called "Red List" of threatened species, was the group's first comprehensive assessment of the Mediterranean Sea. The group says that there is an urgent need for more comprehensive protection programs in the region as well as strict regulations governing the methods of fishing that are allowed. 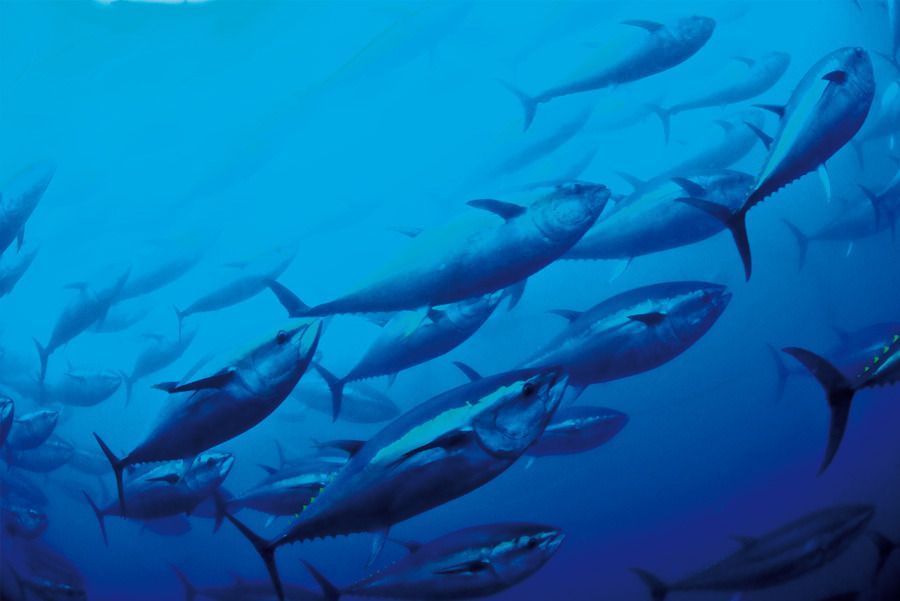 Blue fin tuna in the Mediterranean are threatened, as are 40 other species.