The list of package bombs is long. Every day so far this week, authorities have discovered new explosive devices concealed as parcels and bound for addresses both in Athens and across the European continent. All of them are thought to have originated in Greece.

On Monday, several homemade bombs concealed in hollowed-out books arrived in the mail at several embassies in the Greek capital. Another explosive device was discovered addressed to French President Nicolas Sarkozy.

On Tuesday, officials found more parcel bombs bound for embassies in Athens. In the afternoon, the mailroom at the German Chancellery in Berlin was closed after a package bomb addressed to Chancellor Angela Merkel was discovered there. Officials found the explosive device during a routine check and quickly rendered it harmless.

On Tuesday evening, two further packages -- one addressed to the European police body Europol and a second bound for the European Court of Justice -- were found and destroyed at the Athens airport.

And late on Tuesday, the Greek police reported a suspicious package on board a small mail plane heading to Paris. The plane landed in Bologna where experts examined the parcel, addressed to Italian Prime Minister Silvio Berlusconi. It exploded when it was opened but nobody was injured.

Just before midnight, Greek officials announced that no letters or packages would be sent by airmail for the next 48 hours.

In Germany, Merkel, who was in Belgium on Tuesday when the parcel bomb was discovered, called for increased security on air freight. Speaking to the newspaper Passauer Neue Presse, Merkel said, referring both to the al-Qaida package bombs originating in Yemen last week as well as the most recent spate of explosive deliveries in Europe: "This incident as well as the problem that we just had in the Chancellery with a suspicious package should motivate us to better coordinate controls on freight within Europe with the US and, as far as possible, worldwide."

German Interior Minister Thomas de Maizière ordered mailrooms at all German government facilities to check their security procedures and tighten them as necessary.

In Greece, Prime Minister Georgios Papandreou condemned the series of package bombs. He said his government would be "merciless to those who attempt in vain to rock social peace with terrorist acts and hurt our country's image internationally during a very difficult period."

The country is going through a deep debt crisis and was already tense prior to this week's series of package bomb attacks. Riots shook Greece in the spring and leftist violence is on the rise. On Tuesday evening in Athens, several cars were set on fire in apparent sympathy with the parcel bomb campaign. Papandreou's government has set up a hotline and requested Greek citizens to call in with tips that could help apprehend those responsible.

Officials have initially focused their attention on the left-extremist scene in Athens, which has been increasingly active this year. On Monday, a crack police unit known as DIAS made two arrests in Athens in connection with the package bomb spree. The suspects, both in their early 20s, were found carrying two parcel bombs, a list with 10 addresses including those of courier services, and two Glock pistols.

According to Greek media reports, the police issued an arrest warrant for one of the suspects, Panagiotis A., one year ago due to his alleged membership in the anarchist militant group Conspiracy Nuclei of Fire. He is thought to have smuggled a bomb on board an Athens city bus on June 27, 2009. The other suspect arrested on Monday, Gerassimos T., is thought to belong to the anarchist milieu in Athens but had never been arrested previously. His older brother, however, is suspected of having carried out terrorist activities.

Good for Nothing without a Hole

Left-wing extremists in Greece have become more active ever since the police shot dead a 15 year old in the leftist-alternative Athens quarter of Exarchia in December 2008. Indeed, there are a number of radical leftist cells active in the Greek capital, including a group calling itself the Revolutionary Sect which staged an armed assault on an Athens police station in February 2009. In a statement claiming responsibility for the assault, the group wrote: "The bodies of the police are perfect for target practice. They are like the donuts they eat: without a hole in the middle they are good for nothing."

The painful austerity measures passed by the government in response to the debt crisis have given leftists an additional boost.

The two suspects arrested on Monday have refused to speak to police nor have they allowed themselves to be fingerprinted. Public prosecutors opened an investigation on Tuesday with the two standing accused of carrying out terrorist acts, belonging to a terrorist organization and the possession of firearms. Athens police are searching for five further suspects between the ages of 21 and 30, all of them thought to belong to the left-extremist scene in the Greek capital.

Still, the weapons found on the two suspects now in custody were not used in the Feb. 2009 assault nor in two additional attacks that year claimed by the Revolutionary Sect, police officials have said. 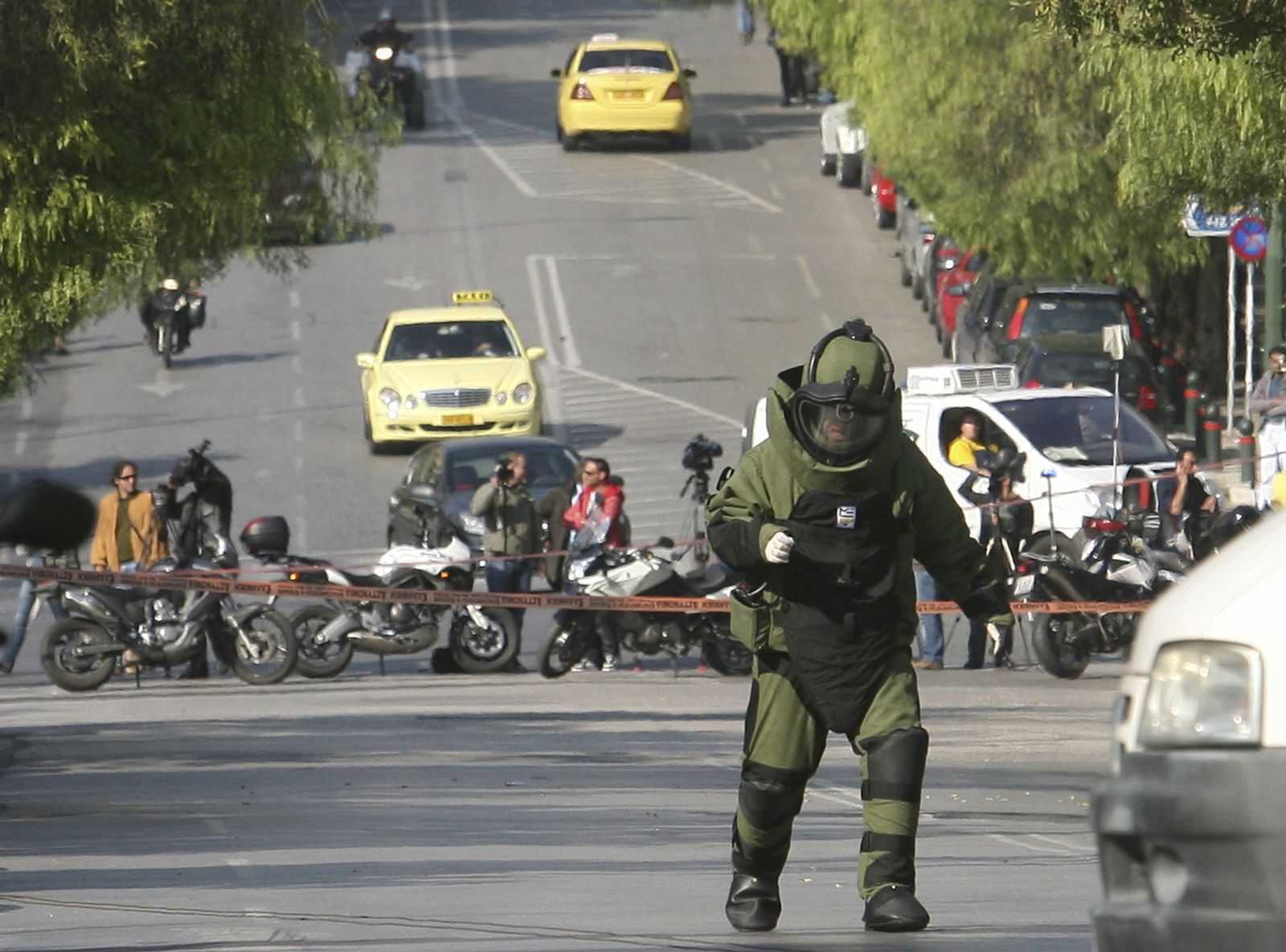 An explosives expert in Athens on Monday arriving on the scene to defuse a package bomb.