Is it time for Europe to break the glass and pull the alarm? World Bank chief Robert Zoellick certainly thinks so. In an editorial for the Friday edition of the Financial Times, Zoellick wrote that "while those living in the euro-zone building, especially those on the executive floors, will not want to hear an alarm, they had best read the instructions. Events in Greece could trigger financial fright in Spain, Italy and across the euro zone, pushing Europe into a danger zone."

Such sentiments about the dangers currently facing the European common currency are hardly new. But this week, concern at the highest levels appears to be slowly morphing into panic. Several senior European leaders have urged speedy action to prevent the situation in Greece and Spain from spiralling out of control -- amid increasing indications that that is exactly what might be happening.

European Central Bank head Mario Draghi provided what was perhaps the most urgent appeal to euro-zone political leaders on Thursday in comments delivered to the European Parliament in Brussels. He said the structure of the euro as it stands now is "unsustainable unless further steps are taken" and also criticized European heads of state and government for not being clear about their common currency strategy. Leaders, he said, "must clarify what is the vision … what is the euro going to look like a certain number of years from now?" Draghi also said that the ECB was unable to save the euro on its own and could not "fill the vacuum of the lack of action by national governments."

Italian Prime Minister Mario Monti also got into the act on Thursday by demanding that the euro backstop fund, the European Stability Mechanism (ESM), be allowed to provide fresh capital directly to struggling European banks, a move that Germany has strictly opposed thus far. In a video-taped presentation for a conference in Brussels, Monti challenged Berlin to "think deeply yet quickly" about further instruments to combat the crisis facing Europe's currency. The focus of such cogitation, he said, should be the Continent's banks.

The most immediate cause of concern this week is Spain. The country's central bank on Thursday released data indicating that some €97 billion -- equivalent to 10 percent of the country's gross domestic product -- had been pulled out of the country in the first three months of 2012 as people seek safer places for their money. Fully €66.2 billion fled the country in March alone, double the December figure, which had been a record to that point.

Concerns about toxic loans on the books of Spanish banks has also increased in recent days after Madrid announced earlier this month that it was injecting €19 billion into the troubled lender Bankia SA. Given the state of the Spanish economy and finances, there is significant doubt whether Spain can afford such a bailout -- and further bailouts should they become necessary. The result has been a skyrocketing of Spanish borrowing costs, with interest rates on 10-year sovereign bonds creeping up toward the dangerous 7 percent mark this week, and a plunging national stock market.

"We are seeing a perfect storm," Raj Badiani, an economist at IHS Global Insight, told the Financial Times.

Spain, though, is far from the only concern. Recent economic numbers have indicated that the situation is getting worse rather than better in Ireland and Portugal, two countries that have already been forced to take advantage of European bailout money.

But it is the uncertainty in Greece that has been primarily responsible for fuelling Europe's current doomsday mood. With general elections in the country approaching in mid-June, there is significant concern that, should the anti-austerity leftist party Syriza win, it could lead to Europe turning off the money faucet, leading to Greece's departure from the euro zone. And that would have unpredictable consequences for the rest of the currency union -- and the global economy as a whole. On Friday, two polls gave conflicting views of voter preferences ahead of the vote, with one finding the pro-bailout conservatives from New Democracy slightly ahead and another revealing a preference for Syriza.

Many investors, it would appear this week, have decided not to wait around to find out. The euro has lost nearly 7 percent of its value against the dollar in May and hit a two-year low on Thursday. On Friday, as European stock markets continue their downward trend, the euro is once again losing ground. 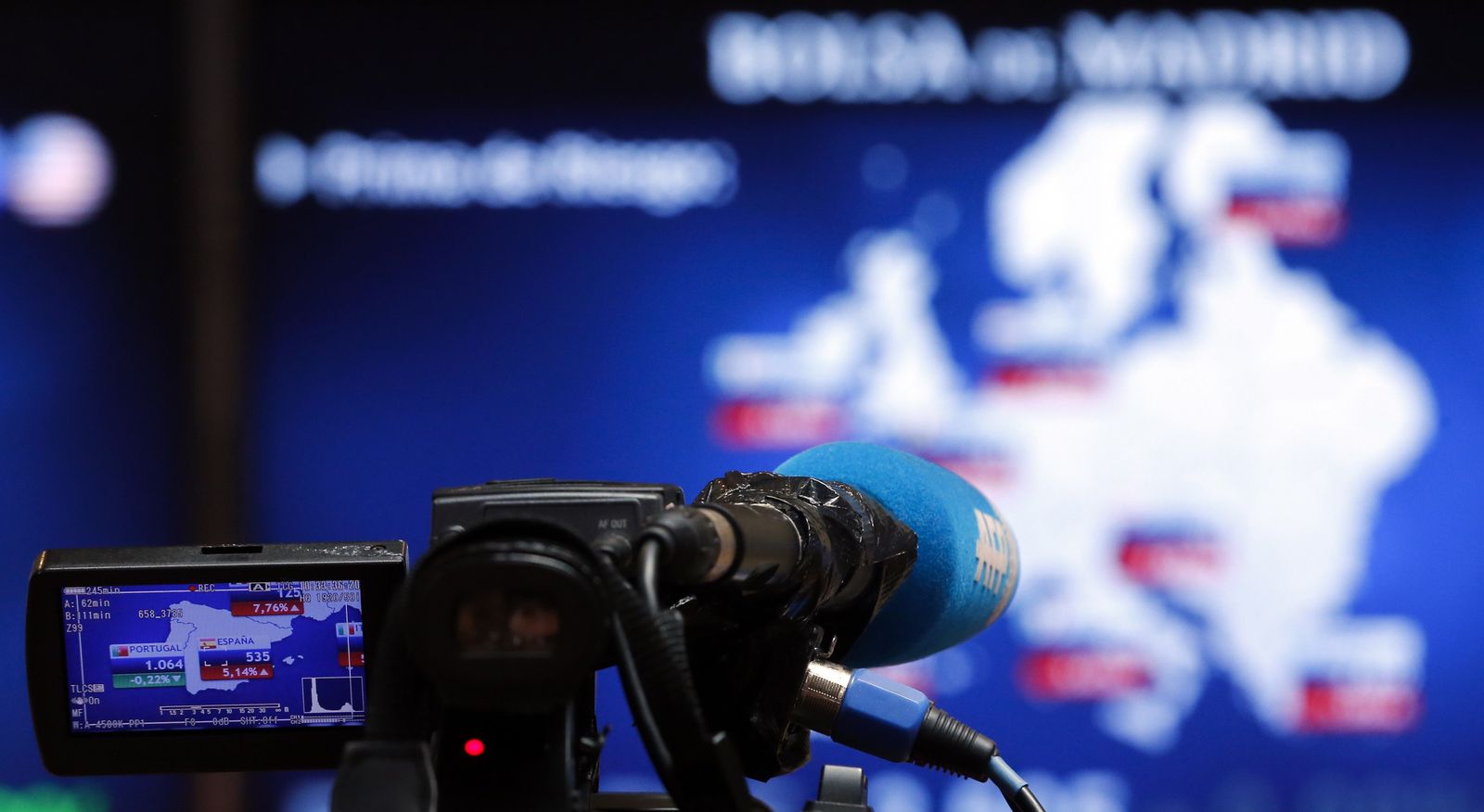 A TV camera in Madrid's stock market pointing at risk premiums on sovereign bonds in Spain and elsewhere.