Tina Turner and German music producer Erwin Bach wanted to make sure that their wedding would not be disturbed. The ceremony, with its roughly 120 celebrity guests, took place on Sunday behind the high walls and trees surrounding Turner's Villa Algonquin estate in the suburb of Küsnacht, on Lake Zurich. The couple set up large red cloth to block the lakeside garden from prying eyes and photographer's lenses.

Shortly after the Buddhist ceremony, the wedding party was startled by a small plane overhead. Toto Marti, a photographer for the Swiss tabloid Blick, leaned forward in the copilot seat and hit the shutter release. The publication landed a scoop and cashed in. Tabloids and magazines all over the world printed the photo. In Germany, it was the cover photo on both the mass-circulation daily Bild and the popular glossy Bunte.

It was exactly this that Turner, 73, and Bach wanted to prevent -- and most likely, in the interest of their media partners, were obligated to prevent. They expected that photographers would try to move in from the lake on boats. But it came as a surprise to many of their guests that the fight for celebrity photos would go airborne. In addition to motor gliders, photographers on Lake Zurich had employed remote-controlled drones.

In the race for an exclusive wedding picture, Marti's colleague Claudio Meier came up cold. The freelance photographer equipped himself with the latest technology and launched a remote-controlled drone from in front of Tina Turner's estate. Meier wanted to fly the aircraft, a so-called quadrocopter, over Turner's extravagant garden in order to get a good shot of the event.

The use of drones is less strictly regulated in Switzerland than it is in Germany. Nevertheless, the police forced the photojournalist to land the drone and confiscated the memory card from his camera. Claudio Meier complains that the action seriously hampered his work. He also says there was another photographer who also tried to use a drone to photograph the wedding guests, among them Bryan Adams and Oprah Winfrey.

Küsnacht's local mayor, Markus Ernst, defends the decision to take action against the photographers' aircraft. The drones could have collided with the helicopters that dropped rose petals over the bride and groom, thereby representing "a threat to air safety."

Drones are gradually becoming established in Germany as a tool of photographers and television crews -- though users here need a permit. Drones are cheaper and quieter than helicopters and can be navigated unnoticed over gardens or in front of windows.

They are used for nature shots, major events and disasters, but also for celebrity photography. "They can be very helpful -- it works well in the US," says Heiko Schoenborn of the photo agency WENN.

But the celebrity journalism community is not in agreement over the use of remote-controlled flying objects. Some photographers still have doubts as to the suitability of flying machines for the work of paparazzi. Hans Paul, who has pursued Angelina Jolie and Brad Pitt on his moped, sees the use of drones in his line of work as "the greatest nonsense." The flight time is too short, the risk of detection too high. He favors a paraglider. "I fly one with a backpack motor and can take much better photos," he says.

For Blick photo editor Tobias Gysi a wedding like Tina Turner's is a huge challenge. "Our readers expect pictures," he says. Celebrities would prefer to control the coverage of the celebration for their own financial gain by entering into exclusive agreements with publishers. When asked how far the press should be able to go to shoot celebrities who don't want to be photographed, Gysi says: "We believe that an overriding public interest in the wedding justifies the publication."

But Christian Schertz, a Berlin-based media lawyer who represents many celebrities, says that the privacy of Tina Turner has clearly been violated. She could sue for an injunction and damages, he adds.

Wedding photos of the rich and famous have a high market value. The profits, says Schertz, should be skimmed off and dispersed to the affected parties, an idea that has so far not been recognized under the German courts' interpretation of the country's privacy laws. 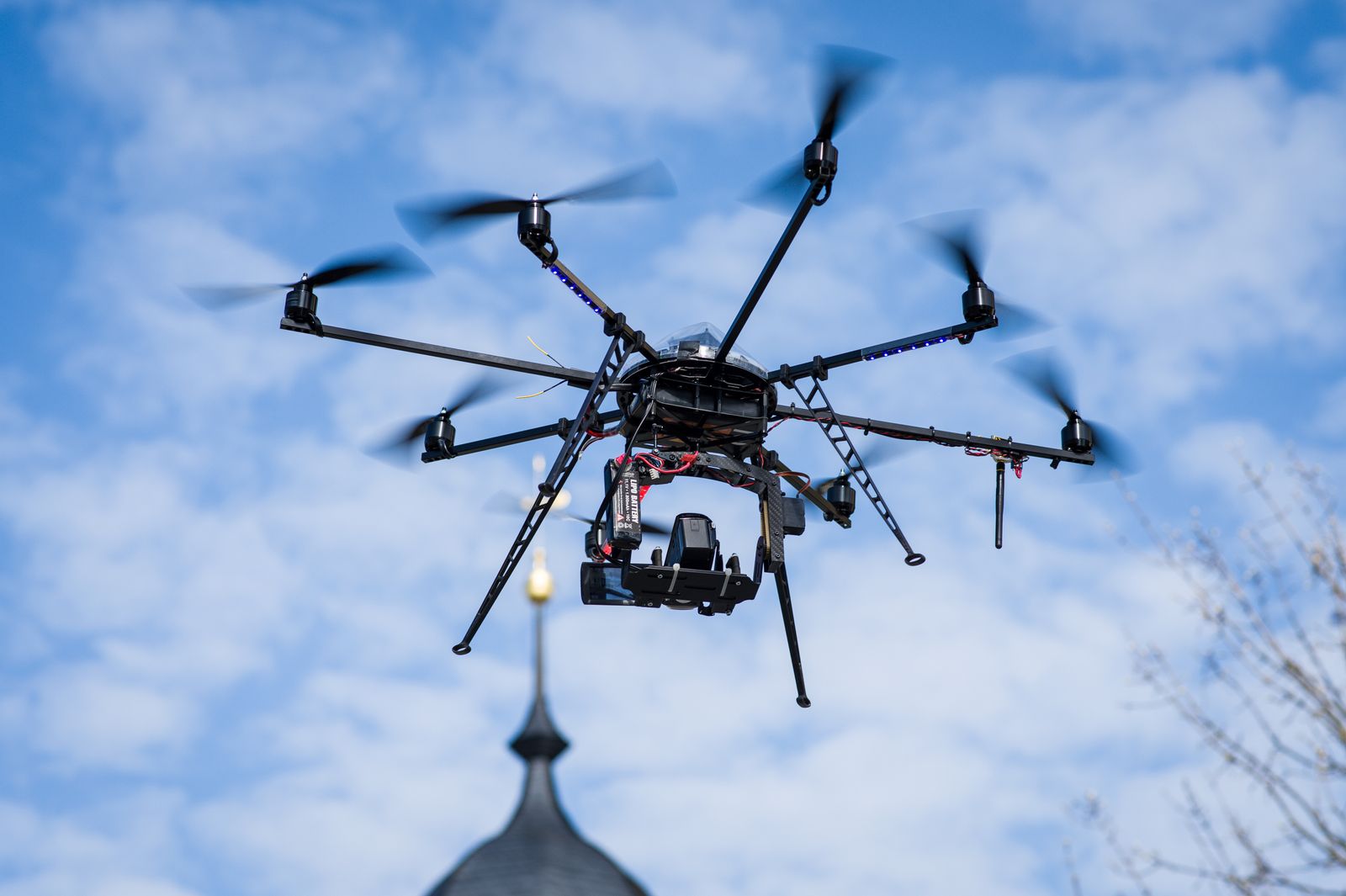 This camera drone in Bavaria is used by a television production team. 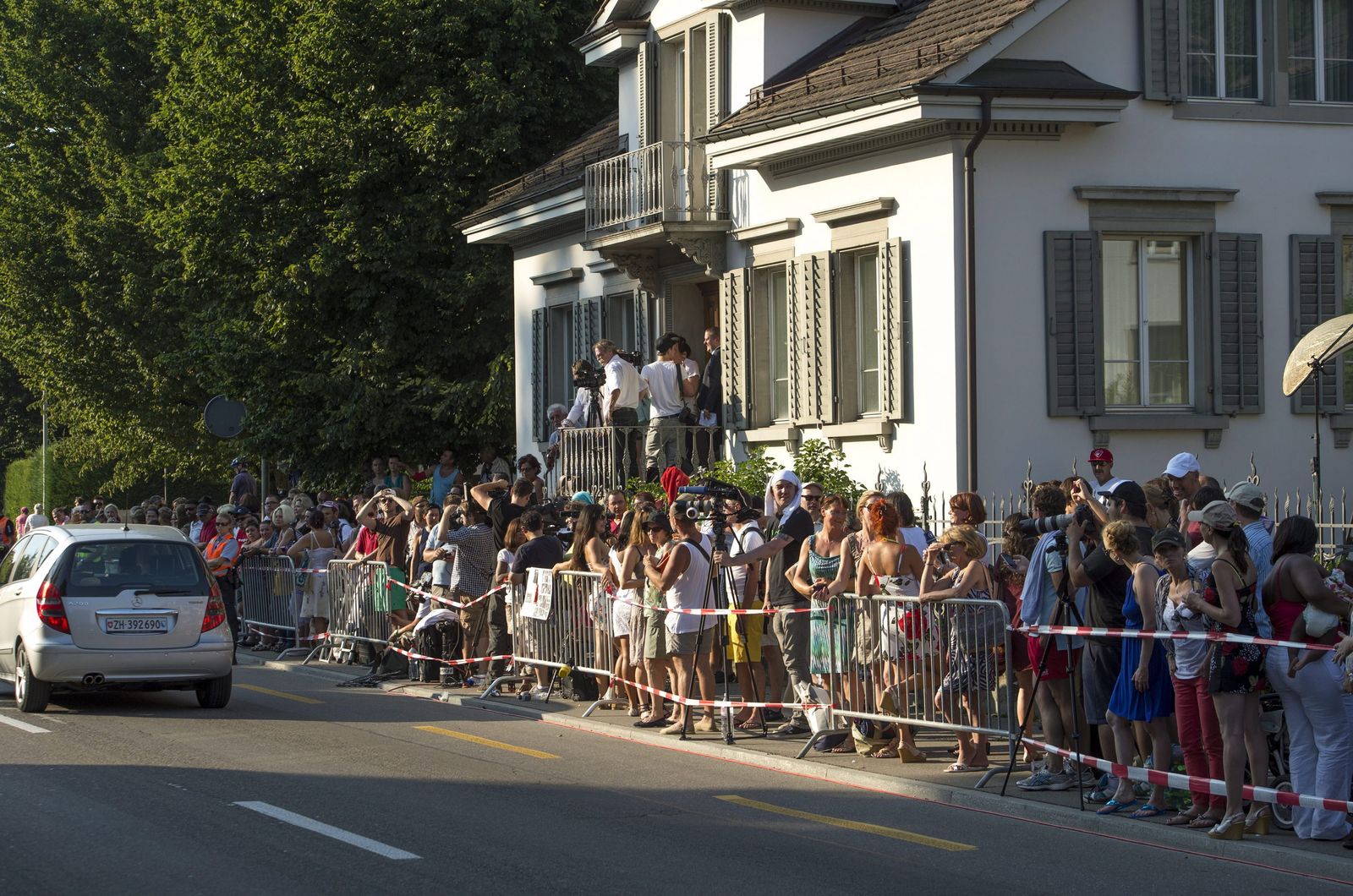 Members of the media and fans stand near Tina Turner's Villa Algonquin during her wedding celebrations in Küsnacht, Switzerland.