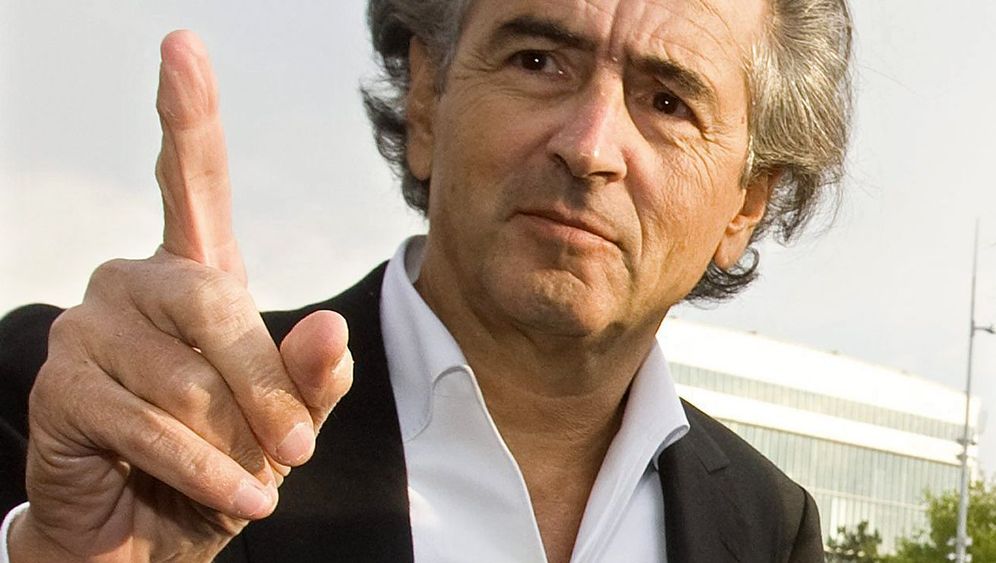 For a long time, the Théâtre du Rond-Point in Paris had the kind of ice-skating rink that used to be abundant in large European cities. With the men dressed in suits and ties and the women wearing dresses, bourgeois Parisians skated to their hearts' content, no matter how fragile the condition of the world outside might be. It wasn't until much later that the building on the Champs-Elysées was used as a theater, as it still is today. But on Monday, January 28, against the backdrop of the beautiful art nouveau architecture, a group of people took to the ice once again, if only figuratively.

The event was titled "Europe or Chaos?" and the program listed an entire exhibition of famous intellectuals. Top billing went to philosopher Bernard-Henri Lévy, who appeared on the radio that morning beating the drum for himself and his friends, including Italian writer Umberto Eco and his Hungarian colleague György Konrád, Spanish journalist Juan Luis Cebrián and Bulgarian-French psychoanalyst Julia Kristeva, as well as the two German writers Peter Schneider and Hans Christoph Buch. On the radio program, Lévy said that they were all going to sound the alarm that evening and call for the rescue of Europe.

And that was exactly what happened.

Well, actually, today's Europe wasn't exactly being rescued at the meeting so much as buried in verbose and nostalgic ranting about the glorious past. The historical references and erudite allusions to Athens ("cradle of democracy") and Rome ("source of the constitutional state") practically bubbled out of Lévy, wearing one of his trademark white shirts, unbuttoned halfway down, which his butler presses for him at his home in Saint-Germain.

In their remarks, the attendees mentioned Goethe and Herder and Husserl and Voltaire, Pushkin and Freud, and Adenauer and de Gaulle and Schuman and De Gasperi. In the face of so much name-dropping, smartphones and Google turned out to be an audience member's best friend.

Europe, said the poets and thinkers, as if they had read a few articles on Wikipedia just before the event, stands for enlightenment, humanism, universally applicable values and the separation of church and state. In fact, as Peter Schneider said in broken French, Europe boasts "the noblest of all cultures in the world." And Umberto Eco? He read a long, baroque, confusing text, which met with thin and somewhat distracted applause. György Konrád? He mumbled something about the "murderous, old dualities" that continue to exist in Europe, and about the conflicts between East and West, and between North and South. And so on. And so forth.

Real Crisis Is Not Black and White

The panel discussion followed a manifesto -- signed by Salman Rushdie, António Lobo Antunes and other members of the cultural nobility -- which had been published in Le Monde and El País a few days earlier. The first sentences read: "Europe isn't just in a crisis. Europe is dying. Europe as an idea, as a dream, as a project." The text continues in this black-and-white vein. The questions of the day, according to the manifesto, are "political union or barbarism," or even better, "political union or death."

Strange. The social purpose of the assembled intellectuals is to calmly and reasonably dissect the world. But, here, they forgot all nuance and seemed to merely launch into a rant. The rhetoric at the Paris panel discussion and in the manifesto alike was childishly exaggerated and filled with plainly false arguments. Europe, the appeal reads, "is crumbling everywhere, from West to East, and from North to South. Populism and chauvinism of all stripes are on the rise."

This is clearly not the continent on which most Europeans live rather unsuspectingly. The intellectual doom-and-gloom scenario makes no mention of the fact that anti-European populists have been losing ground in important parliamentary elections throughout Europe, most recently in the Netherlands. It shrugs off the fact that politicians, perhaps without vision but certainly with great persistence, have been worried about this Europe for years. And if all of this were nothing, it ignores the fact that entire nations have reformed themselves in positive ways in response to pressure from the European Union, that persecution of the Roma in France is now denounced internationally, that media-censorship laws are being fought in Hungary, and that many people can find work -- all thanks to the EU.

And is the euro itself, the currency, "not ultimately an illusion?" the manifesto asks. Well, this rhetorical question is ultimately intellectually dishonest and, above all, one for the populists. That's because the most bizarre aspect of this crisis, even though the opposite is being hammered into everyone's head day in and day out, is that the euro, the money, is not actually in crisis. In the pockets of Europeans, it is simply a functioning, unproblematic means of payment.

The system and the foundation necessary to support the stability of the currency are indeed in crisis. This is what has been the subject of debate for years, and it should have been talked about in Paris. This is where the intellectuals would actually have something to contribute -- provided they are willing to read the small print -- and all of their proposals would be welcome. The problem is that they have none. During the evening in Paris, Lévy went so far as to claim that markets would play no role at all if only the political world had enough gumption. The Americans have a way of responding to this sort of nonsense: "Really?"

At no point was the discussion in Paris concerned with the real world. It didn't address the fact that half of Spain's young people are unemployed, or that Greek hospitals are often only willing to treat families for cash, if at all. No one mentioned that the French, the Irish, the Czechs, the Poles and the Portuguese are afraid of what tomorrow will bring, whether they will have work and how much worse off their children could be. The discussion in Paris wasn't about banks and stock markets, work and everyday life, facts or life itself. Within a half hour, some onlookers were already yearning for an end to the evening.

Of course, it's easy and costs nothing to ridicule intellectuals and their vanities. But, in this case it's a testimony to wounded love, an expression of the disappointment ,that coursed through the visitors' gallery at the Théâtre du Rond-Point as the evening wore on. If these great authors of our time, well-read writers and admired thinkers can think of nothing better to mention in connection with the European crisis than Goethe, enlightenment and, somehow, Rome, if their remarks sound as if they had been written for political soap-box oratory, then Europe must be in truly bad shape, possibly even worse shape than Europe's sensationalist tabloids claim on a daily basis.

The Paris group merely kept reiterating, in various configurations, what European politicians have been saying for 20 years, quoted almost verbatim from the Maastricht Treaty: That there is no alternative to Europe. But no one is saying -- tangibly, comprehensibly and concretely -- why this is the case. The only option they have left is to issue dire warnings, as the intellectual citizens' initiative headed by Bernard-Henri Lévy demonstrated when it used such catchphrases as "political union or barbarism" and "political union or death."

But this means that they too have no idea why we need today's Europe. All they know -- as do we all -- is that they no longer want what is bad about the old system, and yet they somehow want to keep its good aspects.

In Paris, Spaniard Cebrián, the co-founder and longtime editor of the newspaper El País, made a few hesitant advances in that direction. Perhaps one could take a somewhat more "practical" approach to the issue, he said. Citing the Erasmus student exchange program as a model, he advocated projects for trainees and perhaps even for seasoned workers, so that Europe isn't just something to be experienced by its educated elites.

Cebrián was the only one to mention the world of work. He had hardly finished speaking before Kant and Shakespeare, Schiller and Mozart were back on stage. It's unlikely that they will save the European Union. But that wasn't even the purpose of the evening. The people on the stage were interested in assuming the rescue pose, albeit two or three years too late, even as they were constantly predicting Europe's imminent demise.

At times, there were overtones of the 1930s, as if a new Hitler were at the door once again. But such fears seem baseless, especially because, as Julia Kristeva mentioned so cleverly, the idea of the "cult of the nation" has diminished to the extent that its criminal potential has disappeared.

Perhaps one of the outcomes of the summit meeting in Paris is that a new, successful Europe also needs new intellectuals. Or intellectuals who are willing to let old battles lie and finally look to the future. These people exist, perhaps they were just not invited. Someone like Jacques Attali would have been good for the debate. The Frenchman, an adviser to former President François Mitterand, is a man of the 20th century, but he also has some exciting, fresh thoughts on the 21st century. And he also gave one of the best pieces of advice against despair, and about how man should behave in relation to the world around him.

In a speech to UNESCO -- another organization familiar with the tired feeling of crisis -- Attali said that he no longer allows himself to be guided by pessimism or optimism. Both, he said, are the attitudes of spectators in the stands, rooting for the players below, hoping or fearing for them. We human beings, Attali said, are not spectators, but players in our lives. And like all good players, he added, we are better off fighting and working until the final whistle, instead of getting caught up in our hopes and fears.

And how should we react to those who are constantly telling us about gloom and doom scenarios or quoting Goethe and Shakespeare? We should stick out our tongues or thumb our noses at them.