Greek bureaucracy doesn't exactly have a good reputation at the moment. Neither are the country's politicians considered to be very efficient. But Germany's politicians could take a leaf out of the Greek parties' book when it comes to this week's coalition negotiations in Greece. On Wednesday, just three days after Sunday's election, a coalition government was formed consisting of the conservative New Democracy, the Socialists (PASOK) and the moderate Democratic Left (Dimar). The new Greek prime minister is Antonis Samaras, leader of New Democracy, who was sworn in on Wednesday afternoon in Athens.

The success of the negotiations marks the end of weeks of uncertainty for the country and the rest of Europe, where leaders had feared that the left-wing Syriza alliance might win the election, causing the debt crisis to escalate and forcing Greece to leave the euro zone. For now at least, that danger appears to have been averted. In contrast to Syriza, all three parties in the new government broadly support Greece's bailout deal with the European Union and International Monetary Fund (IMF).

But there is little sense of a new beginning in Athens. After all, New Democracy and PASOK took turns in running the country for 37 years. Many voters blame them for getting the country into its current debt mess.

Theoretically the three parties could have already formed a government after the first elections on May 6. But back then they failed to reach an agreement, leading to new elections.

Thus, many Greek citizens have reacted to the new government with scorn. Greek blogger Theodora Oikonomides asked in a Twitter message why the country had gone to so much trouble only to change from a PASOK-New Democracy government to a New Democracy-PASOK government. Another Greek Twitter user asked why the three parties didn't just form a government in May instead of forcing new elections.

Antonis Samaras will have to prove to the voters that his government is not just a new version of the old system. There is, however, not much evidence that he is different: Samaras is just as much a part of the old establishment as his predecessor Georgios Papandreou. The two even shared a room as university students. On top of that, when it comes to the country's austerity measures, Samaras hasn't been that consistent. He rejected them for a long time, only to agree to them in the end.

But in light of the increasing desperate situation in Greece, the austerity measures have now become even more controversial than they already were. At the same time a number of European politicians, including German Foreign Minister Guido Westerwelle, have signaled they are willing to compromise on a reform timetable for Greece.

Within this context, the government seems keen to start renegotiating the bailout terms as soon as possible. Such talks could already begin at the EU summit at the end of next week, said PASOK chief Evangelos Venizelos. "In those two days in Brussels, we will carry out a major battle for revision of the loan and negotiate a framework that will boost the recovery and the fight against unemployment," he told reporters.

The cabinet appointments were expected to be announced by Wednesday evening. Apparently Dimar and possibly PASOK too want to fill the ministries accorded to them with candidates who are not affiliated to a particular party. On the one hand, this could indicate that the parties are getting ready to distance themselves from New Democracy at an early stage. On the other hand, it would prevent the usual party favoritism.

There is apparently already one independent candidate in discussion. The head of Greece's National Bank and former economics professor Vassilis Rapanos has reportedly been tipped to become Greek finance minister -- surely one of the toughest jobs in the new government. 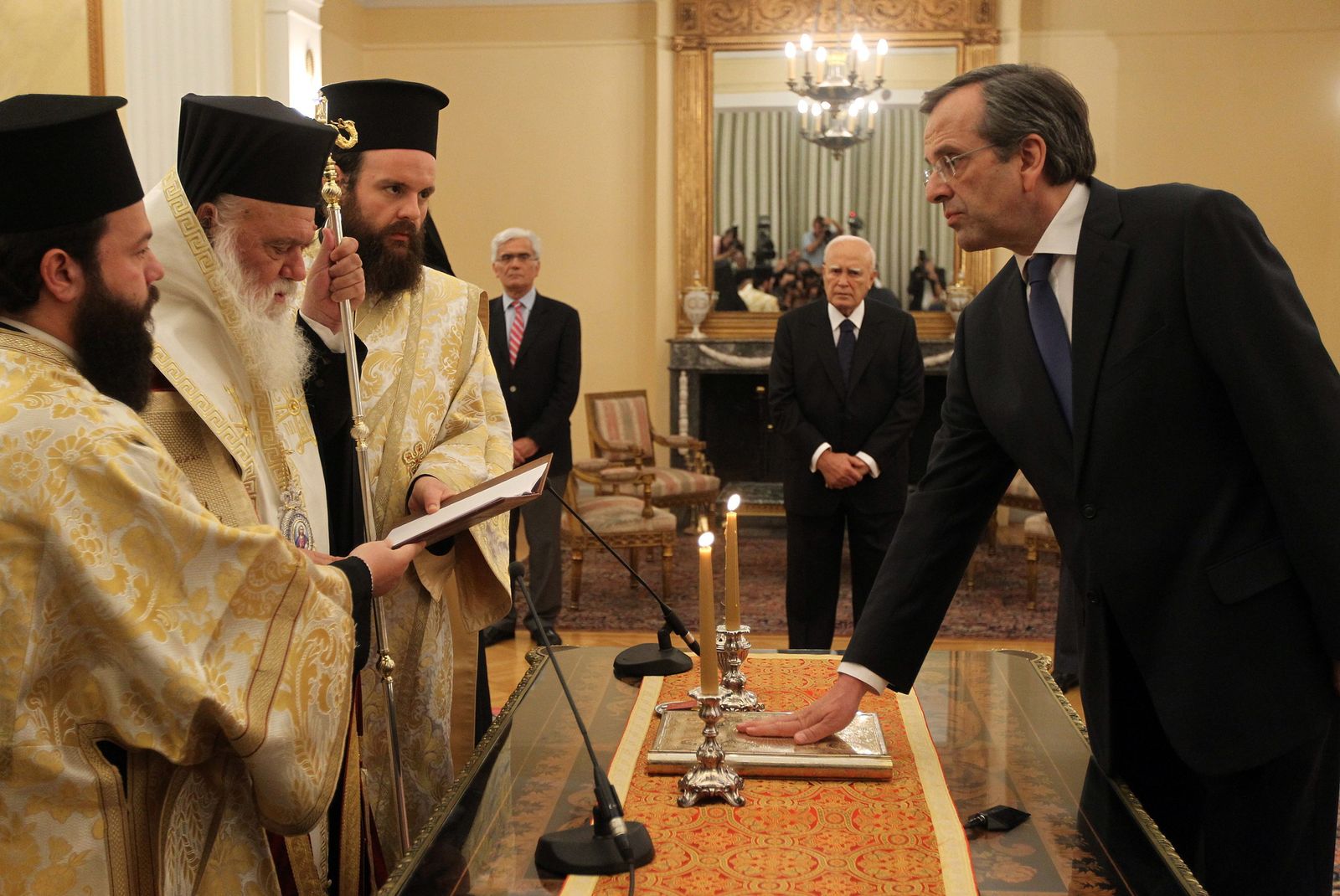 New Democracy leader Antonis Samaras was sworn in as new Greek prime minister on Wednesday at the presidential mansion in Athens.