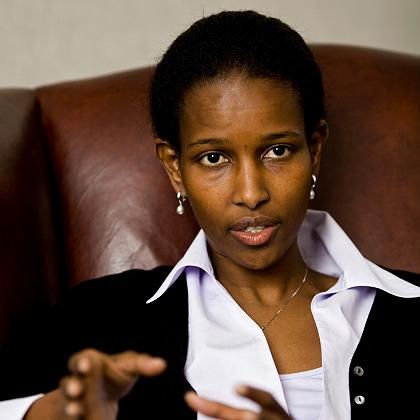 Ayaan Hirsi Ali, the controversial author and former Dutch politician who exiled herself to America in 2006, has been invited to live under government protection in Denmark now that Amsterdam has quit paying for her bodyguards. However she has politely declined, saying Tuesday that her "work is in the United States."

The Somali-born author and prominent critic of Islam left the Netherlands last year after a bureaucratic squabble over her citizenship. She went to work as a fellow for the American Enterprise Institute -- a neoconservative think tank based in Washington, D.C. -- but remained under Dutch protection. Two weeks ago, she returned to the Netherlands after the government quit paying for her bodyguards in America.

Hirsi Ali has been under Dutch police protection since late 2004, when an Islamic extremist stabbed her friend Theo van Gogh to death in an Amsterdam street for his short film against Islam, called "Submission." Hirsi Ali, who was a member of the Dutch parliament at the time, helped write the script. Her life was threatened in a note left on van Gogh's body.

After her first year in the United States, though, the Dutch government said it couldn't pay for Hirsi Ali's protection abroad "indefinitely." Hirsi Ali returned to Europe on Oct. 1. Since then a number of Danish towns, with support from the Danish government, have offered her refuge under the auspices of an organization called the International Cities of Refuge Network, which organizes havens for persecuted writers. Danish Culture minister Brian Mikkelsen then made a formal invitation on behalf of the whole country.

"I thank you with all of my heart," Hirsi Ali responded on Tuesday in an interview published in the Danish newspaper Jyllands-Posten, which first ran the so-called Mohammad cartoons in late 2005. "But my hope and my work is in the United States so right now I am focusing on seeking (financial) means for my security there."