History has shown that when a government wants to solidify its power, it has to turn its subjects into taxpayers. The Roman Empire demanded high tribute payments from every tribe it had newly conquered. And the United States developed from a commonwealth to a federal state when, in the 18th century, Treasury Secretary Alexander Hamilton achieved uniform duties and taxes for the entire union, initially on whisky, because it was so lucrative.

Politicians in the euro zone are now seeking to emulate the historic model from the early years of the United States. The unnerving bargaining over the latest Greece bailout program has led the leaders of the monetary union to conclude that the euro zone has to become more tightly joined together politically.

European Central Bank (ECB) President Mario Draghi wants stricter rules for the banking union. French President François Hollande is calling for a separate economic government for the monetary union. And in Brussels and Berlin alike, financial experts are devising plans to provide the Euro Group with the same tool that has proven to be so successful throughout history: its own tax.

If the plans were implemented, it would constitute the breaking of a taboo for the Continent. The people are used to the fact that some powers are shifted to Brussels as part of European unification. But there is one thing even the most devoted proponents of Europe had shied away from until now: giving the EU the right to impose taxes, a power many felt the member states should retain. It had long been a given that this was something the European people would never accept.

But with European leaders shuttling regularly back and forth to Brussels to attend crisis meetings on an almost weekly basis, public opinion has shifted. Proponents of a European tax say that if revenues and expenditures were centrally administered, at least in part, a single government could no longer blackmail the others. It would also finally give the European Commission the funds it needs to pursue its own economic policy. If the economic climate worsened, Brussels could also lower taxes throughout Europe, in order to "better counteract recessions," says Marcel Fratzscher, head of the German Institute for Economic Research.

A Challenge to Merkel's Power

The plans are still in their early stages, but it is already clear who could lose out if they became reality: German Chancellor Angela Merkel, supposedly the most powerful woman on the Continent.

For years, she has wanted to strengthen the monetary union with more intergovernmental agreements. But now her new rival, Finance Minister Wolfgang Schäuble, who also advocates a financial government for the euro zone under the auspices of the EU, could have his way. In a recent interview with SPIEGEL, he made it clear that if push came to shove, he would be willing to resign over the issue of Greece. He also stressed that he has a completely different plan for the monetary union than Merkel. "We have to move further toward establishing a political union," he said, "for example by strengthening the European Commission and the European Parliament."

The chancellor has now been forced to go on the defensive on one of the issues that is most important to her. At home, she is at cross purposes with the most powerful minister in her cabinet, and in Europe a rival who many had already written off is suddenly challenging her leadership role: French President François Hollande.

The French leader seemed exhausted when he recently spoke with reporters in Brussels after 17 hours of negotiations over Greece, but he left no doubt that he saw himself as a victor. France's goal, he said, was to keep Greece in the euro zone, and he spoke of a "new era of European development" and a "strengthening of the monetary union."

A week later, he presented his ideas to the public. The euro zone needs its own finance minister, equipped with extensive powers to intervene in national budgets, Hollande said. The finance minister would be supervised by a separate euro-zone parliament. In addition, he said, the parliament and the euro finance minister should receive their own budget, to give them the power to offset economic fluctuations, for example. In other words, they would receive a separate treasury, which could readily be interpreted as the precursor to a separate euro-zone budget.

Although Finance Minister Wolfgang Schäuble, a member of the center-right Christian Democratic Union (CDU), is open to the proposals from Paris, he believes that they don't go far enough. Experts in his ministry don't believe that the treasury demanded by the French, which would be funded primarily by borrowing jointly guaranteed by all euro-zone members, would go far enough.

Instead, it is important to the Germans that the euro finance minister have access to a permanent and, in particular, abundant source of income. Schäuble's people are willing to relinquish substantial national revenues to the euro finance minister. It would be possible for the member states to divert portions of their value-added tax or income tax revenues into the new Brussels finance minister's budget. Both are seen as relatively stable income sources.

Another idea is to give the euro finance minister the right to impose his or her own surcharge on both taxes. "We are prepared to seriously discuss these issues," say officials at the Finance Ministry in Berlin.

The European Commission's response to the latest foray from Paris is also fundamentally positive. However, the plans would open a new divide in Europe, because the new economic government would only have jurisdiction over euro members, but not countries like Poland and the Czech Republic.

European Commission President Jean-Claude Juncker wants to do everything possible to avoid dividing the EU into euro members and non-euro countries. But the latest negotiations over the Greek bailout have reinforced Juncker's conviction that the euro zone cannot rely on the goodwill of the remaining EU member states.

For this reason, members of the Commission also see a separate budget for the euro zone as desirable. In a report on the future of the monetary union, which Juncker and the presidents of the key EU institutions recently released, there is already talk of a "mechanism of fiscal stabilization for the euro zone." According to Elmar Brok, a CDU member of the European Parliament and close associate of Juncker, "the euro zone must start thinking about its own tax."

The experts were originally asked to discuss "self-funding" for the EU's total budget. But during a luncheon with Juncker and his commissioners in early July, Monti suggested that the group also consider a "fiscal capacity" for the euro zone. He meant the euro zone assessing its own taxes. Juncker supported the idea. Potential sources of funding include the planned tax on financial transactions or shares in a European-wide, harmonized business tax.

Chancellor Merkel is skeptical of the new movement. She is concerned that a new economic government based on the French plan would transform the common currency into a transfer union once and for all. Instead of ensuring that the member states comply with strict European budget objectives, they could be tempted to redistribute as much money as possible in Europe, or, more specifically, from the rich North to the poorer South.

Merkel also shares Juncker's concerns that the plans could divide Europe once again, this time between euro and non-euro countries. "The EU as a unit cannot be destroyed by new walls," says Brok. Countries like Poland, he adds, cannot "become second-class members, both institutionally and practically."

These are weighty arguments, and hardly anyone is making them in Europe at the moment. It can be taken for granted that the monetary union would unlikely survive another Greek-like scenario. And Merkel's efforts to solve the euro crisis have been deeply disappointing.

Brussels legal experts use the word "intergovernmental" to characterize the method with which the chancellor took emergency management to the level of heads of state and government during the debt crisis. Merkel wanted the European Council, the powerful body representing EU government leaders and heads of state, to be primarily responsible for leadership of the monetary union. In contrast, the German chancellor envisioned only secondary roles for the European Commission and the European Parliament.

Merkel believed that new, more reliable rules for the euro zone should not materialize through the normal channels of EU legislation (the "community method"), but through agreements between individual governments. In a keynote address at the College of Europe in Bruges, Belgium, in November 2010, the chancellor glorified this approach as the "union method."

In fact, several intergovernmental agreements were reached at the height of the debt crisis. But only the European Stability Mechanism (ESM) was truly effective. To be able to continue supplying money to cash-strapped, crisis-ridden countries, the bailout fund was established as an independent, intergovernmental organization outside Brussels' sphere of influence.

In contrast, all other agreements initiated by Merkel largely failed to reach their goals. For instance, in March 2011 European leaders agreed on the so-called Euro Plus Pact, designed to improve monitoring of the member states' spending. But the agreement was ineffective, because it only called for a voluntary commitment.

Merkel made another attempt soon afterwards. An agreement on stronger financial supervision, the Fiscal Pact, was actually signed in early 2012. Future budget offenders were to be forced to save through court decisions and fines. Merkel called the pact an "important step toward a stability union."

But Germany's partners felt that a "right to intervene" for the European Commission or even the European Court of Justice was out of the question. Skeptics warned of a "system of mutual consideration" from the very beginning, and that was exactly what happened. The agreement is hardly observed in practice, and even countries like France, which have continually violated the debt criteria for years, can expect leniency again and again.

The assessment that this cannot continue is now widespread in Europe. The mistakes in the architecture of the monetary union cannot be corrected in the long run with periodic new agreements that end up being violated anyway.

Instead, a central financial authority must make a large portion of the decisions in the euro zone in the future.

The only question is: Are the member states willing to relinquish their national sovereignty rights to Brussels, at least in part, in such important areas as budgets and taxation? And how will this sit with citizens, who already feel that EU technocrats are controlling their lives?

The hurdles are high, and yet there is a growing recognition that a new principle will probably have to be added to the principles of Chancellor Merkel's crisis policy soon. If the economic government fails, so will the euro. 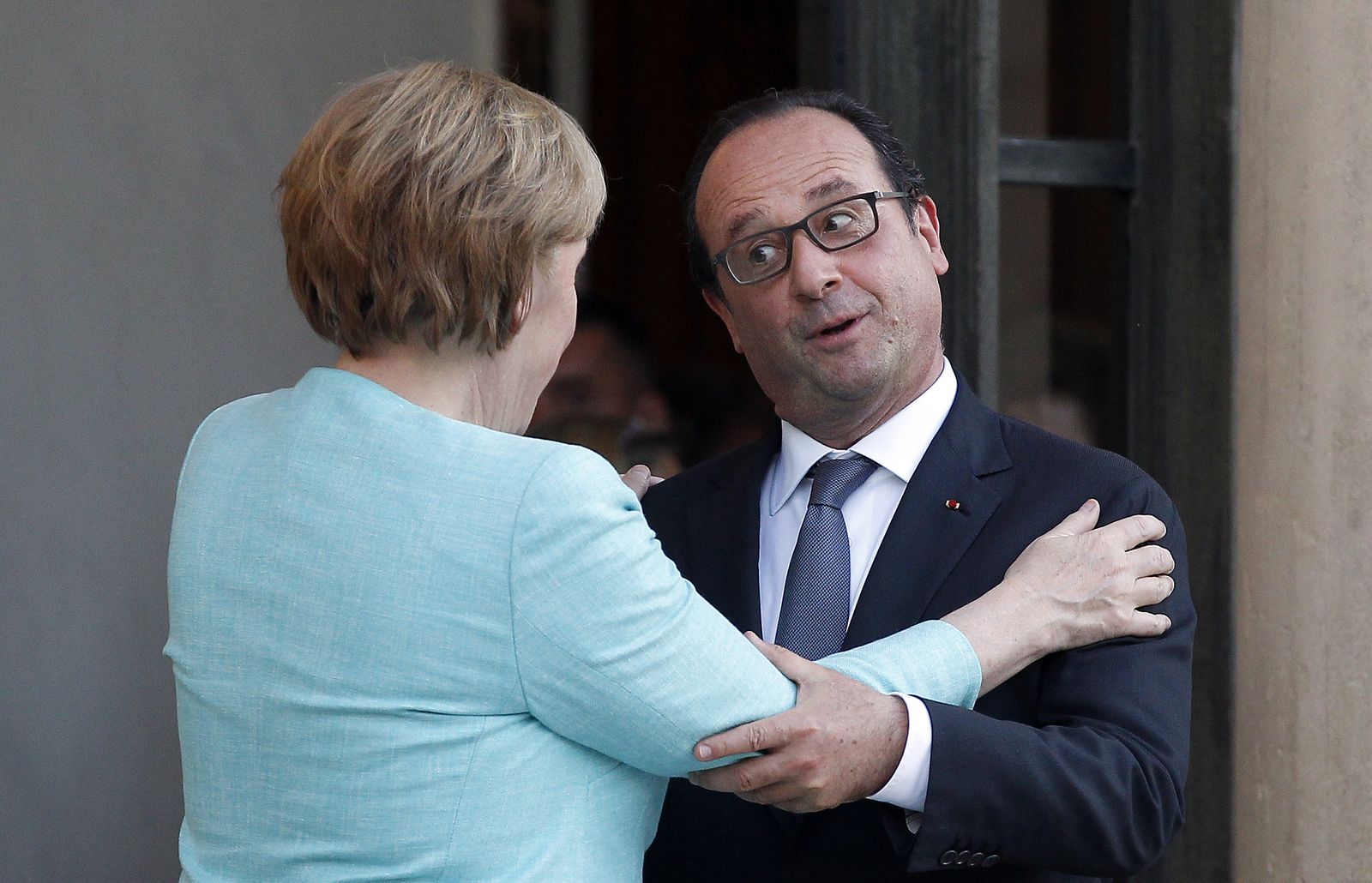 German Chancellor Angela Merkel is facing a challenge to her euro-zone policies not only by French President François Hollande, but also by her own finance minister. 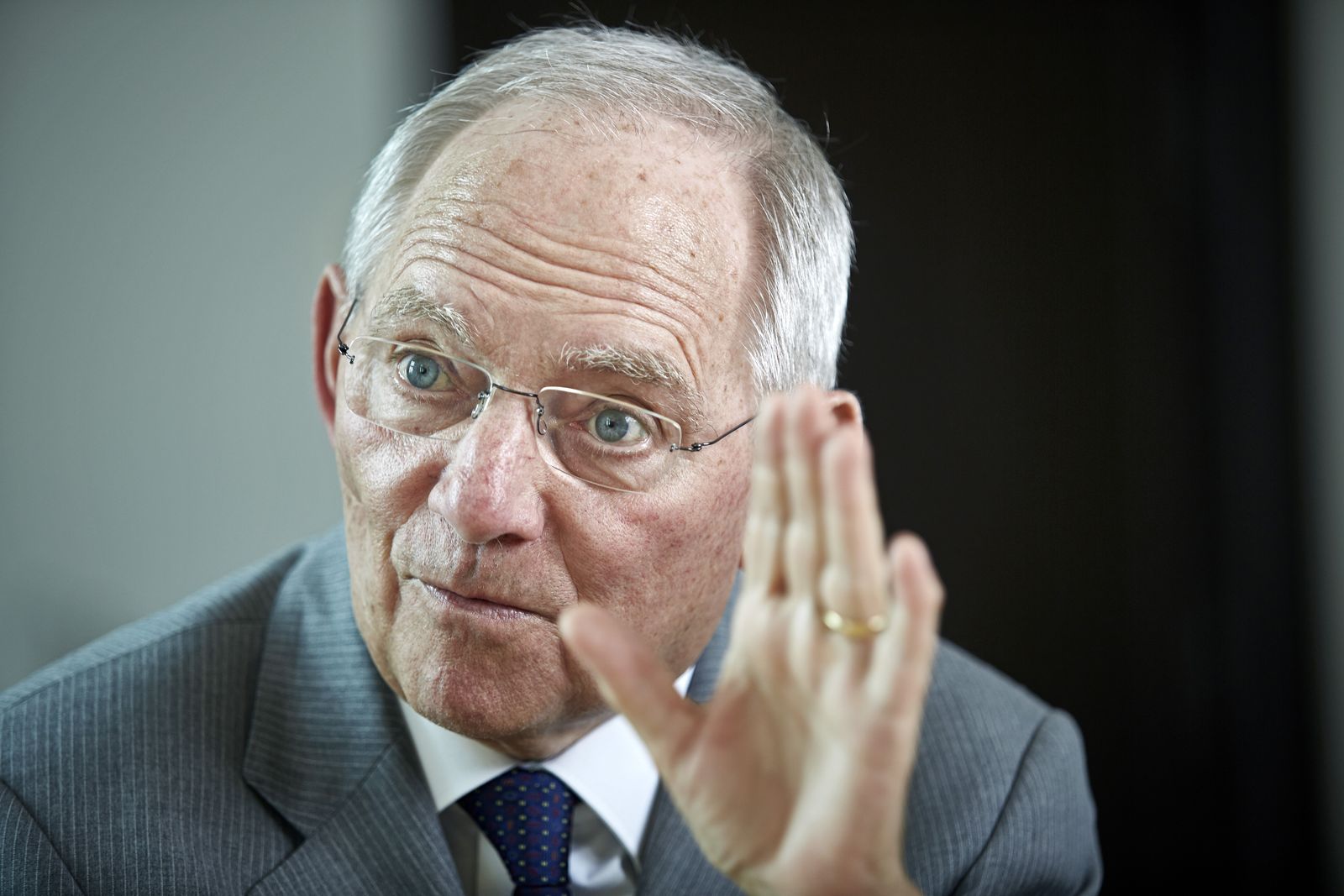 German Finance Minister Wolfgang Schäuble believes an economic government should be established in the euro zone and his ideas may ultimately prevail over those of Chancellor Merkel.