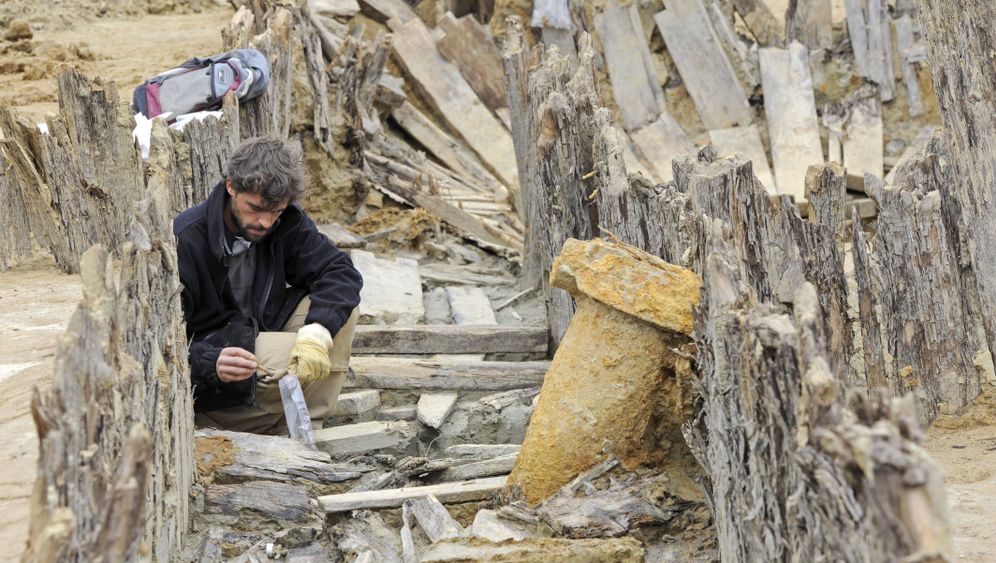 Archaeologists in northern France have unearthed the bodies of 21 German soldiers from World War One in an elaborate underground shelter that was destroyed in a French attack in March 1918, and hasn't been opened since.

Individual war casualties are still frequently found during construction work on the former Western front battlefields of France and Belgium, but the discovery of so many soldiers in one location is rare.

The tomb, poignant and grisly, sheds light on the lives of the soldiers who died in explosions from heavy shells that penetrated the tunnel.

"It's a bit like Pompeii," Michaël Landolt, the French archaeologist leading the dig, told SPIEGEL ONLINE. "Everything collapsed in seconds and is just the way it was at the time. This is an extraordinary find."

The men were from the 6th Company of the "Reserve Infanterie Regiment 94." Their bodies had been left in the dugout because retrieving them was deemed too dangerous. A total of 34 men in the shelter were killed in the attack. Troops managed to haul out 13 of the dead at the time.

The roof of the "Killian Shelter," a tunnel 125 meters (410 feet) long near the small town of Carspach in the Alsace region, was discovered by chance in October 2010 during excavation work for a nearby road building project. The regional French archaeological authority, PAIR, began a thorough dig last month and expects to complete its work by mid-November.

Pipes, Wallets and a Rosary

The tunnel, six meters underground and 1.80 meters high, was built with German thoroughness, equipped with heating, telephone connections, electricity, beds and a pipe to pump out water. It had 16 exits and was big enough to hold up to 500 men in an emergency.

The archaeologists have uncovered the sides, floors and stairways, all made from heavy timber. The intended permanence of the structure shows how static the fighting was for most of the war, in which both sides built vast trench systems that stretched 440 miles from the Swiss border to the North Sea.

Boots, helmets and weapons, a wine bottle and a mustard jar have been found along with personal items including dog tags, wallets, pipes, cigarette cases, spectacles and pocket books. A rosary was also found, with a French bullet threaded in among the prayer beads, evidently fashioned as a souvenir.

"The items will be taken to a laboratory, cleaned and examined," said Landolt. It is unclear whether the booklets found are diaries or identity papers.

The skeleton of a goat was also discovered. It may have been held as a source of fresh milk.

In Britain, the discovery of such a mass grave would be front-page news. Journalists would track down the descendants of the dead soldiers and tell the stories of the Tommies who made the ultimate sacrifice in the horrific conflict that shaped the 20th century.

That was what happened in 2009, when mass graves containing 250 Australian and British soldiers were unearthed near the village of Fromelles, close to the city of Lille. A program was launched to identify the remains through DNA matching, and 110 have been identified by name after over 2,000 relatives responded to calls for DNA samples.

In Germany, it's a very different story. The find has only made the inside pages of a handful of newspapers. In the nation's memory, the war is eclipsed by World War II, the Holocaust and the collective guilt that weighs on Germany to this day. Both conflicts have imbued Germany with a deep streak of pacifism.

"Britain, France and Belgium still refer to it as the Great War, but our memory of it is totally buried by World War II with the Holocaust, the expulsion from the east, the Allied bombardment," Fritz Kirchmeier, spokesman for the German War Graves Commission, told SPIEGEL ONLINE. "World War I plays only a minor role in the German national memory."

The Commission is holding out little hope that it will be able to track down the families of the dead.

"We haven't reached anyone yet and it will be very hard, as you can imagine, given the time that has lapsed," said Kirchmeier. "It's a difficult business that involves contacting local registry offices."

It would not appear to be an insurmountable problem, though, if the public interest was there. The names and dates and places of birth of all the 21 soldiers are known. Their dog tags have been found. The soldiers include Musketeer Martin Heidrich from Schönfeld, aged 20, Private Harry Bierkamp, born Jan. 18, 1896 in Hamburg, and Lieutenant August Hütten from Aachen, aged 37.

A memorial stone bearing their names stands in the nearby German war cemetery of Illfurth. The Commission will rebury the bodies in the cemetery unless it manages to contact descendants and they decide to have the remains repatriated to Germany.

Jürgen Ehret, a German who is assisting the French authorities in the Killian dig, has researched the history of the front line in this region of Alsace, which was quiet compared with the battlefronts further north, whose names evoke the mechanized slaughter that marked the war -- Verdun, the Somme, Artois and Ypres. An estimated 15 million people were killed and 20 million wounded in what was described as "the war to end all wars."

"The French attacked the shelter with aerial mines with delayed-action fuses that penetrated the ground and blasted in the side wall of the shelter in two points," said Ehret.

The French bombardment lasted six hours and the special mines, fired up almost vertical in a high arc, proved too much for the supposedly bomb-proof Killian dugout. The French attack followed a three-hour German artillery barrage with shells containing mustard gas.

The remains of around 10 to 20 German soldiers from the war are usually found in France and Belgium each year, said Kirchmeier.

For Commonwealth soldiers, the average is 35, which isn't surprising given that more than 165,000 of them are still unaccounted for on the Western Front.

"The Fromelles operation was a good example of the level of public interest, which was extraordinary," Peter Francis, spokesman for the Commonwealth War Graves Commission, told SPIEGEL ONLINE. The identification process couldn't have been as effective as it was without that public engagement, he added.

Interest in the World War I has always been strong in Britain and has intensified with the deaths of the last veterans in recent years, and with the emergence of the Internet, which has made it easer to trace the location of the graves of fallen ancestors. A further boost is likely to come in the run-up to the centenary of the outbreak in 2014.

It remains to be seen whether that anniversary will fan interest in Germany as well, said Kirchmeier. By that time, the Killian shelter will have vanished again, under a road. But the men who died in it, forgotten or not, will at least have found a worthy resting place.