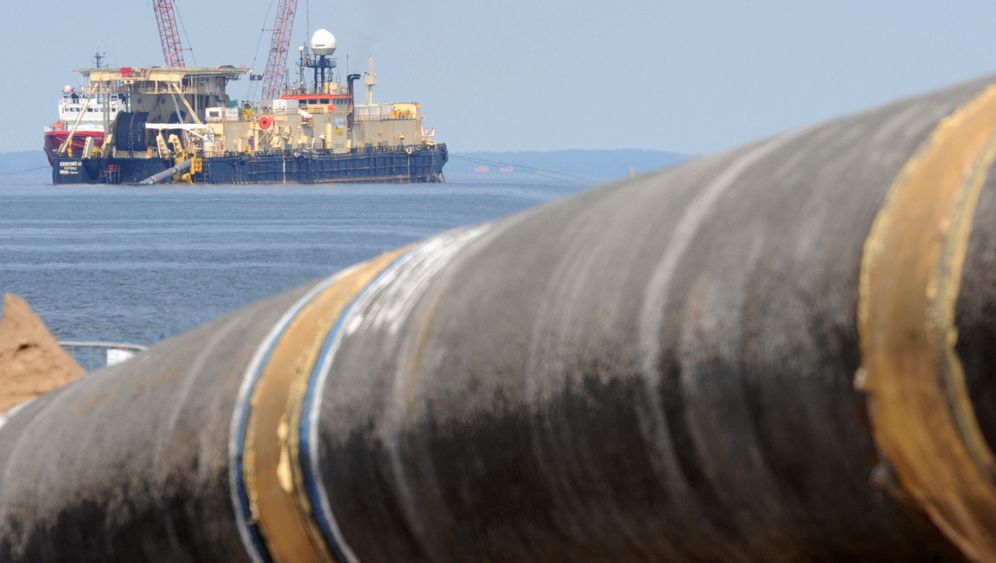 The street that will lead into Poland's radiant future is dilapidated. Rusty steel mesh protrudes from the concrete, and deep puddles have formed where some of the concrete slabs have sagged into the ground. But such adverse conditions can hardly shake Krzysztof Krzemiski's enthusiasm.

Krzemiski is the mayor of Reda, a small city in northwestern Poland. He maneuvers his gray Volkswagen Passat around the potholes and stops in front of a rickety chain-link fence. Behind it are massive walls from an earlier era, now overgrown with grayish-green vegetation.

It was here, 50 kilometers (30 miles) west of Gdansk, on Lake Zarnowiec, that Poland's communist regime once poured the foundations for a nuclear power plant. Krzemiski was the head of a work brigade at the time. "It was my first job as an engineer," he says. It was "a nice time, very demanding and challenging."

But it all ended with the fall of communism, when the country's new, democratic leaders halted construction on the plant. "We shut down the site in 1989," says Krzemiski. "A few concrete and steel parts were sold for next to nothing, and the reactor went to Finland."

Now, more than 20 years later, the situation has fundamentally changed. Poland, no longer the dirt-poor supplicant of the post-communist era, has transformed itself into an increasingly influential member of the European Union. The economy is booming, and Poland needs electricity -- a lot of electricity. For that reason, Krzemiski believes that the dream of his youth will become a reality after all, and that a reactor will finally be built on Lake Zarnowiec. "Coal is running out, the wind isn't very strong in Poland and the sun rarely shines," he says. "We need nuclear energy."

Poland's nuclear dream is practically destined to cause friction with its neighbor to the west. Rarely in the last 1,000 years have Poland and Germany been on such good terms as they are today. But in response to Poland's decision to build nuclear power plants, lawmakers of all political stripes in the state parliaments of the eastern German states of Brandenburg and Mecklenburg-Western Pomerania (both of which border Poland), as well as in the city-state of Berlin, have passed motions appealing to the Poles to follow Germany's lead and do without nuclear energy.

But even in the wake of the nuclear disaster in Fukushima, which turned public opinion in Germany massively against atomic power, Warsaw remains undeterred in its determination to develop nuclear energy. "If someone doesn't want to build nuclear power plants, that's their problem," says Polish Prime Minister Donald Tusk. Last week, Economics Minister Waldemar Pawlak told the German newspaper Frankfurter Allgemeine Zeitung that the decision had already been made. The state-owned energy company PGE is expected to build two reactors, and one of them will most likely be in Mayor Krzemiski's jurisdiction, on Lake Zarnowiec.

The disagreement over nuclear power isn't the only energy dispute that pits Polish producers against German politicians. They are also at odds over shale gas discoveries. Geologists have found enormous natural gas reserves locked into the rock deep underneath the hilly, forested landscapes of Pomerania and Kashubia in northwestern Poland. Foreign Minister Radek Sikorski already envisions his country as the Norway of Eastern Europe.

But, once again, it is primarily German environmentalists who are curbing the euphoria over the natural gas find. Jo Leinen, a member of the European Parliament for the center-left Social Democrats and an environmental expert, is calling for tighter regulation of the special process used to extract the natural gas, known as fracking. The process involves the injection of chemicals into layers of rock, with the risk that the substances could potentially leach into ground water.

As Poland's former ambassador to Germany, Janusz Reiter is adept at gauging the mood in German-Polish relations. He fears that a dispute over nuclear power and shale gas could revive old stereotypes on both sides. "Energy is a highly emotional political issue," he says. "For many German environmentalists, the survival of humanity is at stake."

The Poles, for their part, can be touchy when they feel that someone is trying to tell them what to do -- especially if they are German. They are also worried about the fruits of the painful transformation process, and they are afraid that without nuclear power they will never attain the standard of living Western Europeans take for granted.

'There Is No Way to Avoid Nuclear Energy'

The offices of the nuclear energy division of the Polish Economy Ministry are on Three Crosses Square in Warsaw. Director Zbigniew Kubacki receives SPIEGEL in a drab conference room. The only wall decoration consists of a map showing Poland surrounded by users of nuclear power. The Scandinavians produce nuclear energy, and so do the Baltic countries, the Czechs, the Ukrainians and, for the time being, the Germans. The Slovaks and even the Belarusians plan to build new reactors soon. Only Poland, says Kubacki, is lagging behind once again.

Kubacki points out that the country's energy consumption is growing by 4 percent a year, in parallel with its economy. Brown coal, also known as lignite, currently provides about 90 percent of Poland's energy. "But we have European obligations," says Kubacki. "We have to reduce CO2 emissions and diversify the energy mix."

Of course, Kubacki adds, Warsaw will promote renewable energy, no matter how costly. But green energy sources are not nearly enough to satisfy the country's energy needs. Kubacki insists that Poland will buy state-of-the-art reactors and adhere to the highest safety standards. But he also admits that no one in Poland knows what to do with nuclear waste, which remains radioactive for thousands of years. He also admits that according to surveys, support for nuclear energy among Poles dropped below 50 percent after Fukushima.

Nevertheless, he says, "there is no way to avoid nuclear energy." But even though he puts it diplomatically, Kubacki's message is clear: The Germans should tone down their criticism. After all, as he sees it, one reason they are so well off today is that they have been using nuclear energy for the last 50 years.

On some days, Kubacki receives up to 2,500 protest emails from Germany. Environmental initiatives based in Brandenburg and Mecklenburg-Western Pomerania provide templates for such correspondence on their websites.

"We take all objections seriously," Kubacki says politely. It sounds more like an accusation.

Many Poles fear that despite their tremendous economic successes, the Germans will continue to treat them as backward country bumpkins who are proving to be obstinate on the subject of nuclear energy.

The Poles become especially irate when the Germans and the Russians join forces, as they did almost seven years ago, when Berlin and Moscow agreed to build a natural gas pipeline under the Baltic Sea, bypassing Poland.

Then-Chancellor Gerhard Schröder didn't even feel it was necessary to consult Warsaw. For many Poles, the notion that Germans now want to prevent them from developing their own natural gas reserves is the height of audacity.

Henryk Doering, the mayor of the village of Krokowa north of Gdansk, no longer understands the Germans, even though he normally holds them in high regard. Despite the resistance of local nationalists, he has preserved German inscriptions on the village school building, which date back to the time when the region was part of Germany. "Our German past is part of our history," he says.

But ever since the shale gas was discovered, he has refused to tolerate the objections coming from environmentalists across the border. The state-owned gas company has already done two test drillings in his community, and gas was found both times. "We hope to see production on an industrial scale here within two years," he says.

Poland currently buys two thirds of its natural gas from the state-owned Russian gas company Gazprom, which charges Russia's former ally higher prices than its business partners in the West. Warsaw currently pays Russia $500 (€375) for 1,000 cubic meters of gas, while the rest of Europe pays only $300. Poland has filed a lawsuit against Russia in an international court of arbitration in Stockholm.

"The Russians still treat us like renegade subjects," says Doering, but his resentment isn't just directed against Russia.

The village mayor turns toward the Baltic Sea, where the German-Russian pipeline is located. He makes an offensive gesture, slapping his left hand against the crook of his right arm and quickly raising his lower arm with his hand balled into a fist. "Once we start pumping our shale gas, you can all get lost."