Poland is at risk of perishing in the "mix of cultures and races" and of becoming "part of a world of cyclists and vegetarians." Such claims helped Polish Foreign Minister Witold Waszczykowski, 59, to notoriety, and he hasn't become any more diplomatic during the year he has served in the national conservative government in Warsaw. Waszczykowski, who holds a Ph.D. in history requested an interview one week after Poland became the only European Union member state to vote against Donald Tusk, a former Polish prime minister, for the position of European Council President. We met with Waszczykowski in his office, which is decorated with a portrait of Józef Pilsudski, who secured Poland's independence following World War I -- and who later eliminated democracy by way of military coup.

Waszczykowski: May I please start the interview for a change?

Waszczykowski: Were you given political directives from your boss prior to this interview?

SPIEGEL: No, of course not. Are you referring to the email sent out by the Ringier Axel Springer publishing house to journalists working for its Polish subsidiary, requesting them to report positively on the European Union?

Waszczykowski: Yes, exactly. What do you think of that? We are now wondering if all German media outlets adhere to political instructions.

SPIEGEL: How do you envision such a thing working? Do you think that somebody calls our editor-in-chief and instructs him how to report on Poland?

Waszczykowski: What the publishing house did is a clear case of political interference in the affairs of a neighboring country. Yet we have been accused for a year and a half -- by Germany as well -- of exerting influence on our press. Now we seem to have the proof that it is actually the other way around.

SPIEGEL: But these instructions you are referring to didn't come from political leaders. They came from a private media company. In Poland, it is the government that is seeking to exert influence. But you can be certain that the questions I have prepared for you are mine alone!

SPIEGEL: Great. What did you mean when you recently said that Poland must "drastically lower" its trust in the EU and "start negative politics?"

Waszczykowski: For many years, people tried to convince us that the EU was a club of altruists and that rival national interests were a thing of the past. The summit two weeks ago made it clear that this isn't the case. We learned that we have to defend our political interests. We are aware that we have less power and economic potential than Germany. But we want our concerns to be taken seriously.

SPIEGEL: Where are your country's interests being contravened?

Waszczykowski: Everywhere! Take energy policy and the construction of the Nord Stream 2 pipeline between Russia and Germany, for example. Or climate policy: The strict CO2 limits severely damage the Polish economy because our energy is based on coal. We can't afford to become a backwards country with fresh air. We need both: the opportunity for growth and a clean environment. The EU should have established weaker requirements in accordance with the spirit of European solidarity.

SPIEGEL: You sound disappointed, which is surprising. Poland is doing quite well: The economy is growing and by 2020, your country will have received some 80 billion euros from European structural funds. It is the EU's largest beneficiary.

Waszczykowski: And the EU is the greatest beneficiary of Polish membership! We are a market of almost 40 million people. You've earned an enormous amount of money from us; the Germans alone have sold 55 billion euros worth of goods in Poland. We see the money from the structural funds as compensation for opening our market.

SPIEGEL: Yet Poland clearly profits as well: New roads have been built, jobs have been created and agriculture is supported.

Waszczykowski: Of course the money is beneficial to us. But who is building those roads? Western European companies. Eighty cents of each euro that comes from Brussels flows back to the West.

SPIEGEL: You have also accused the EU of unfairness because your compatriot Donald Tusk was re-elected as European Council president, over objections from Poland.

Waszczykowski: We insist that EU rules be adhered to. But at the summit, the rules were changed according to the momentary desires of the majority. The vote's overseer, the Maltese prime minister, didn't even hold a real vote on Donald Tusk. He simply asked who is against him. And that was it.

SPIEGEL: The result of the vote was 27 to one. Do you think that the result would have been any different had the vote formally recorded approvals and abstentions?

Waszczykowski: I don't know. But 30 years ago, as members of the Warsaw Pact, we learned what happens when an alliance doesn't conform to the rules. We thought the EU was democratic and transparent. But that's not the case. Plus, the election of Tusk violated the principle that a candidate for an important EU office must have the support of his own country.

Waszczykowski: But then we could just propose a Mexican next time. It doesn't say clearly anywhere that the European Council president must be a citizen of an EU country. Many smaller countries have had similar experiences of seeing their interests ignored. It's not purely a Polish thing. The larger countries, together with a caste of Brussels officials, exert extreme pressure when a smaller country runs counter to the mainstream. And we have a problem with that.

SPIEGEL: What is it about Donald Tusk that bothers you so much?

Waszczykowski: We are critical of the partisanship he displayed during his first term as head of the European Council. He intervened in domestic Polish politics and continued to serve as the de facto head of the opposition. He traveled to Poland in December, for example, to criticize our government.

SPIEGEL: Tusk said your government was in violation of democratic rules. Brussels even launched an assessment in accordance with the Rule of Law Framework because your government disempowered the constitutional court. How do you intend to solve the problem?

Waszczykowski: Why us? In February, we sent our most recent response and haven't heard anything since then. We view the issue as resolved. The procedure is also an example of European double standards: When the previous government began two years ago to prematurely restock the constitutional court -- where was the European Union then? The liberals tried to dominate the court in accordance with their wishes such that it could work against our government like a third chamber of parliament. The justices could have shot down every one of our decisions. We were trying to defend ourselves.

SPIEGEL: Poland is considered to be one of the Continent's "problem children." Are you not afraid of leading your country into isolation?

Waszczykowski: For many years, previous Polish governments acted as though everything that the majority of the EU wanted was in Poland's interests. We don't agree. We received a mandate from Polish voters to defend Polish interests, within the EU as well. Referring to us as a "problem child" is paternalistic and insulting. A part of the European political class denies the rest the right to exist. The concept of liberal democracy is undemocratic; the political spectrum to the right of center is considered evil, dangerous and politically incorrect -- and is sidelined.

SPIEGEL: The EU is increasingly developing towards a two-speed -- or even multiple-speed -- Europe. Where do you see Poland in this regard?

Waszczykowski: We are calling for unity in Europe; we don't want any further divisions. Two, or even several, speeds: Those are recipes that will destroy Europe. We have arrived at a decisive point: Are we going to stay together or is everyone going to go their own way? That is something you have to ask in some Western capitals. The result of different speeds would be the establishment of a leadership group that rules over the other members.

SPIEGEL: Your government is demanding that the EU be reformed. What kind of reforms would you like to see?

Waszczykowski: We could imagine a great deal more cooperation when it comes to border protection and defense. But we believe that more thought must be put into the competencies of the European institutions. The European Council, for example, consists of representatives of elected governments, meaning it has a high degree of democratic legitimacy. As such, it should have the most power. The Commission, by contrast, is made up of deputies sent by the member states. They are bureaucrats. As such, the Commission shouldn't have the right to monitor member states, as happened to us with the Rule of Law Framework. The Commission should only be able to carry out directives from the Council and should not have its own political ambitions.

SPIEGEL: You are demanding a Europe in which nation states have more influence. Is that also a function of your problematic relationship with Poland's most important partner, Germany? You branded the election of Donald Tusk as a German conspiracy.

Waszczykowski: Just a few hours before the summit, German Chancellor Angela Merkel said in German parliament that she was pleased that Donald Tusk was going to be re-elected as European Council president.

SPIEGEL: So what? It was clear where the majority stood.

Waszczykowski: We think that Angela Merkel' comment was a political directive to the other member states: I want Tusk to win.

SPIEGEL: And you think that the other 26 members would accept such a thing?

Waszczykowski: That's what it looks like to us, yes. Regarding our relationship with Germany: We have differences on energy policy and we also aren't of the opinion that Germany should be allowed to dictate to other EU countries how many refugees they must accept. We do, however, see commonalities in defense policy. Of course the Germans are an important partner for us. Annual trade volume between our two countries is over 100 billion euros; that is much more than between Germany and Russia. That is why I always tell my German colleagues: Think carefully about who you solicit -- the Russians or those with whom your economy is deeply entwined. There are a number of issues that unite us, but at the same time, we openly admit that there are also issues that still must be clarified.

SPIEGEL: That sounds like the old Polish accusation that Berlin is too indulgent with Moscow. Shouldn't you be more concerned about U.S. President Donald Trump establishing a pact with Russia?

Waszczykowski: Trump said a lot of peculiar things during the campaign, to put it mildly. But we believe he will fulfill his NATO obligations. American soldiers are stationed in Poland. We will have to wait and see how Trump behaves regarding Russia. We are, of course, in favor of dialogue with Moscow, but we are unfortunately pessimistic that anything would come out of it. Under Putin, the country will remain backward, imperialist and corrupt.

SPIEGEL: Your Law and Justice party is often mentioned alongside other right-wing populist parties like the Alternative for Germany (AfD). Does that bother you?

Waszczykowski: I'm not interested in the AfD. We see ourselves as a conservative-patriotic party that focuses on social needs and defending Christian values and historical traditions. We can't be classified as right or left. We are definitely democrats and reject chauvinistic ideas. 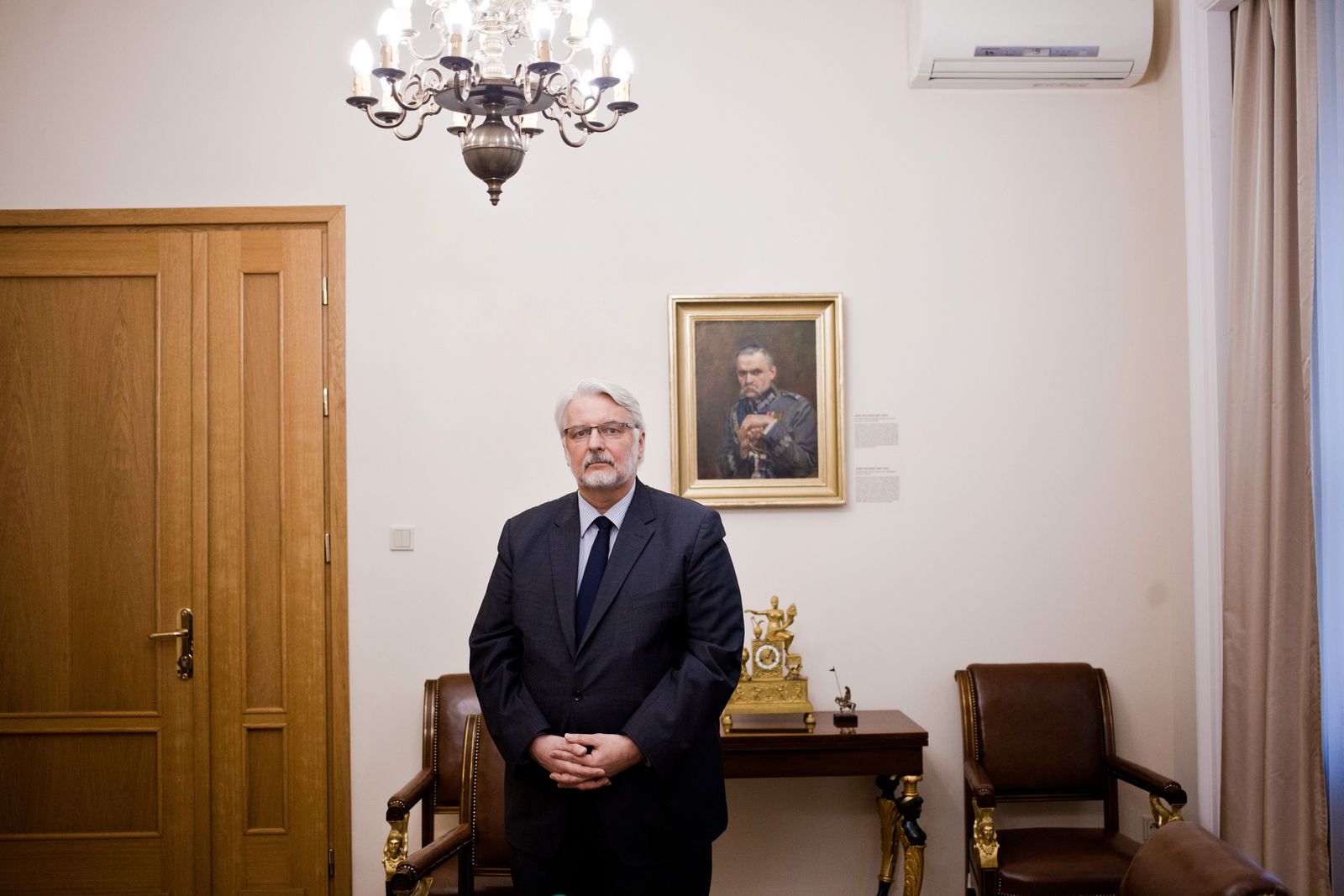 Witold Waszczykowski in his office in Warsaw