Świdnik is an extremely Polish kind of haven. A model city from the communist era, residential blocks are lined up along a concrete parading ground and the town was built around the state helicopter factory. Thanks to European Union subsidies, the once gray blocks of flats have now been renovated, while the helicopter factory is still in operation, now run by an international corporation. Until the arrival of coronavirus, the town of 40,000 enjoyed full employment. Even the parade grounds have been beautified with wooden benches and flower pots.

Świdnik, with its comfortable prosperity, is the world of Radosław Brzózka. An amiable man in a blue suit, Brzózka studied theology at university and speaks enthusiastically about his three children. A teacher in a former career, he now works for the city and serves in regional parliament as a member of the "patriotic” voter association. "Here in Świdnik, everybody knows everyone," he says. "We look after each other. We take care of the normal people, the Kowalskis and Novaks."

To ensure that there was no uncertainty for the Kowalskis and Novaks, Brzózka and his local council adopted a declaration last year. With only two opposing votes, the local parliament in Świdnik spoke out against the alleged advance of "LGBT ideology," against "homopropaganda" and in favor of the "innocence of children." Świdnik, the declaration states, wants to preserve the "national traditions" of a more than 1,000-year-old Christian Poland.

The idea soon spread, and 90 other cities, including the Lublin district, adopted similar declarations and the movement now covers a third of Poland. That figure has been calculated by gay and lesbian activists. In protest, they have printed signs with the words "LGBT-free zone” and hung them up at the entrances to the towns for photos. The images circled the globe and the European Parliament criticized the homophobic declarations. Towns in France cancelled sister city agreements with Polish counterparts who had approved the declarations. In the major city of Poznań, located in western Poland, the city council put up poster saying, "LGBT+ - in Poznań, you are always welcome."

How Open Does Poland Want To Be?

The small city of Świdnik fired up a culture war that is now being debated all across Poland. At issue is not only the fate of gays and lesbians, but also the question of how liberal and open the Polish want to be as a society.

It’s a conflict that is dividing the entire country. On the one hand, you have supporters of the nationalist-conservative Law and Justice Party (PiS) government under Jarosław Kaczyński. On the other, you have the liberal parties aligned with former Prime Minister Donald Tusk.

Kaczyński wants a strong state that serves as a guardian of the national consciousness and the common good, but also the morals of its people. To do that, he has set about radically restructuring Poland’s judicial system. The liberals, on the other hand, are against it and are demanding freedom and rights for everyone.

The same opponents who have been arguing in recent weeks about whether Poland should hold an election for a new president in spite of the coronavirus crisis, as the government desired. Ultimately, the country had a "ghost election” in May with no voters. The vote has now been rescheduled for late June.

Former Foreign Minister Witold Waszczykowski once described the conservatives' enemy as being "a world of vegetarians and cyclists." Gays and lesbians apparently fall into that same category. For people like the conservative local councillor Brzózka, they stand for all the impositions of the new era, for a modernity that questions everything that is dear to him, including faith, family and traditions.

Brzózka then quotes from the "Catechism of the Catholic Church." Gays and lesbians are to be treated with respect, but, "homosexual acts are intrinsically disordered."

Opponents of the LGBT movement argue that same-sex unions should therefore under no circumstances be treated on equal footing as marriage, nor should any adoption rights be granted to gay or lesbian couples. For Brzózka, these ideas are the manifestations of a dangerous "LGBT ideology.” He appears to view homosexuality as a kind of ultraliberal lifestyle - not as an innate inclination, but as something that is chosen. He also says he knows who conjured up the ideology: "It’s an international, revolutionary, neo-Marxist movement. They want to create a new human."

Honorata Sadurska has dyed blue hair and drives a pink car, which, in in the town of Końskowola, located 60 kilometers from Świdnik, is a statement. The town is home to 2,200 inhabitants, a few shops, a bar, farms and two Renaissance churches. Town Hall is currently being renovated with the help of EU funds.

The 26-year-old has always been an outsider here. She’s a veterinarian and lives with her mother in a weathered brick house. She put a sign up on the door to the backyard that reads: "Epidemic area." It’s a reference to a Polish bishop's recent characterization of homosexuality as a "rainbow epidemic."

Sadurska took part in the protest action with the signs at the entrance to the town. But she’s tired and wants to leave Końskowola as soon as possible. "All my friends have already moved away," she says, and is hoping to find a job in Warsaw, where things are a lot freer. "They leave you alone here if you live your life quietly and secretly as an LGBT person,” she says. "But when you make yourself visible, you become a 'pedał'." The swearword isn’t easy to translate, but it has extremely negative connotations and evokes the word pedophilia.

Sadurska’s room is crammed with stuffed animals, CDs and guitars. There’s a can of pepper spray between them. "It’s a must have. I don't go out at night without it." She says the climate has deteriorated since Świdnik passed the declaration. Whether it be rejection, taunts or dumb remarks, everyday discrimination appears to be sanctioned from the top down.

In contrast to Warsaw, there is little openly gay and lesbian life in eastern Poland. But one person who isn’t willing to hide is Tomasz Kitliński, and he walks through the streets of Lublin’s historic center in a yellow shirt, red shoes and rainbow scarf. The professor of philosophy is one of the intellectual leaders of Poland’s LGBT movement. As far back as 17 years ago, he and his husband, now a professor at a university in Poznań, were models for the art project "Let Them See Us.” They got married in Brighton, England. Surveys taken in Poland show that around 65 percent of the population opposes gay marriage.

Kitliński lives in a completely different world than Radosław Brzózka. He has the ability to find signs of diversity just about everywhere, enthusiastically leading the way through the Roman Catholic, Orthodox and Lutheran-Augsburg cemetery, showing German, Russian and Polish names on the gravestones. "Catholics, Protestants, Jews and Orthodox lived together for centuries in Lublin,” he says. For Kitliński, it’s precisely this openness that is part of the Polish tradition. A focus of his doctoral was the Polish term "gościnność," or hospitality. It contains the words "gość" for guest and "inność" for otherness.

When the local parliament in Lublin voted on an anti-LGBT declaration, Kitliński demonstrated with a banner reading: "We are people, not an ideology.” The head of the local municipal administration, a member of the nationalist-conservative PiS, answered: "There can be no equality between good and evil."

Kitliński wrote an essay in which he contrasted gay pride parades with the marches of the right. In it, he wrote that life-affirming diversity stands in opposition to the black and gray of the nationalists - a culture of openness and tolerance versus a "culture of death.” He didn’t make any new friends with it. "The right wing needs us as a bogeyman,” he says. "Initially, the PiS directed its propaganda against migrants, but now they have shifted their attentions to an allegedly corrupt caste of judges - and against us," says Kitliński.

Activists like Professor Kitliński and Honorata Sadurska fear that the homophobic declarations from Świdnik and all the other conservative towns and cities could be just the beginning. They worry that the nationalist-conservative government could pass laws that would make life more difficult for gays and lesbians – regulations along the lines of the ban on the "promotion of homosexuality” that Russia implemented in recent years. That would make it possible for the government to ban the kind of gay pride parades that are held in many Polish cities. Kitliński says that Polish society is actually tolerant, and that it’s mostly fear that is driving the anti-LGBT declarations. "They fear change and they fear modernity, but there’s no stopping it.” 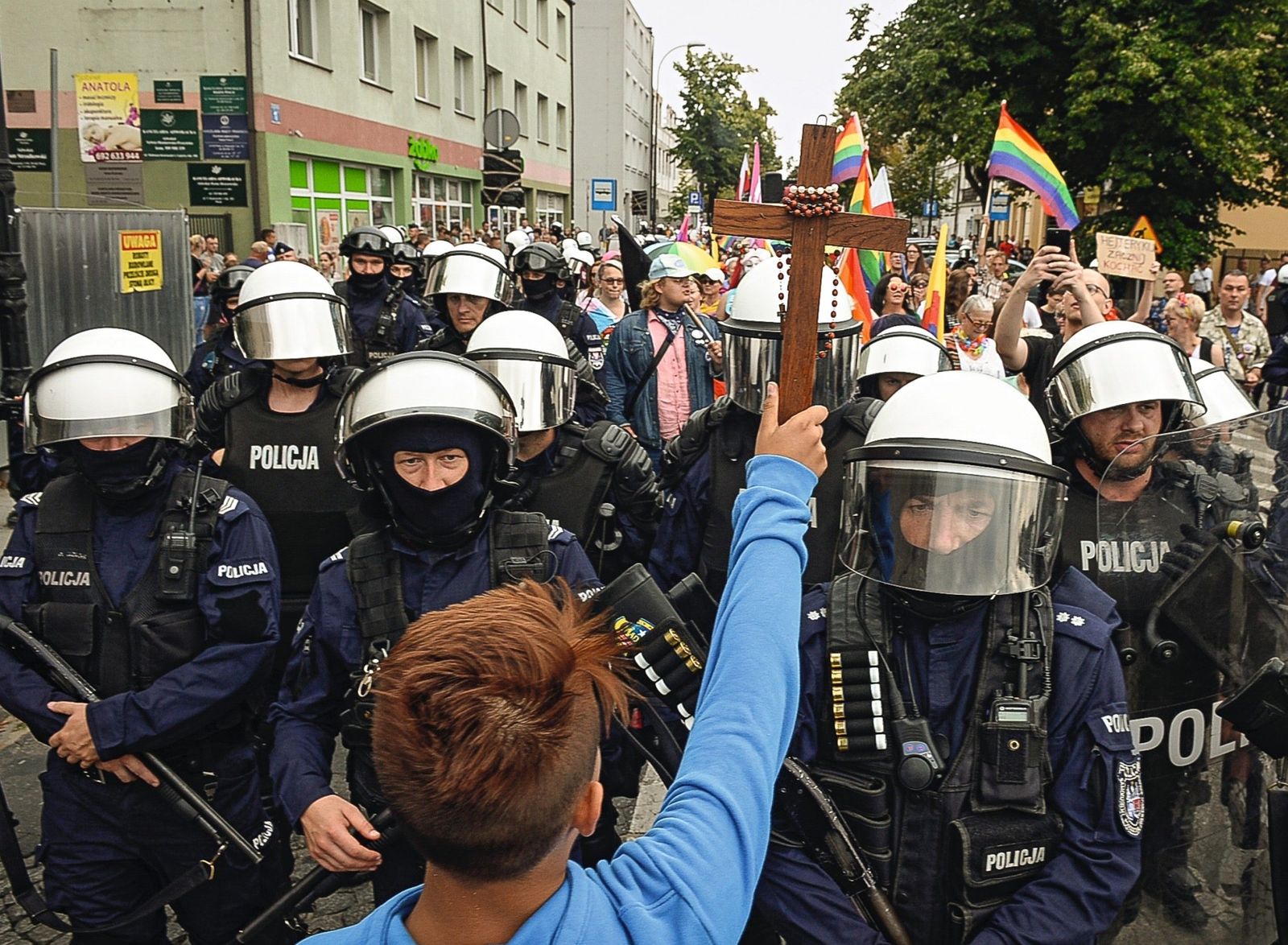 Counter demonstrators and police at a gay pride parade in Płock in 2019: "We are people, not an ideology."