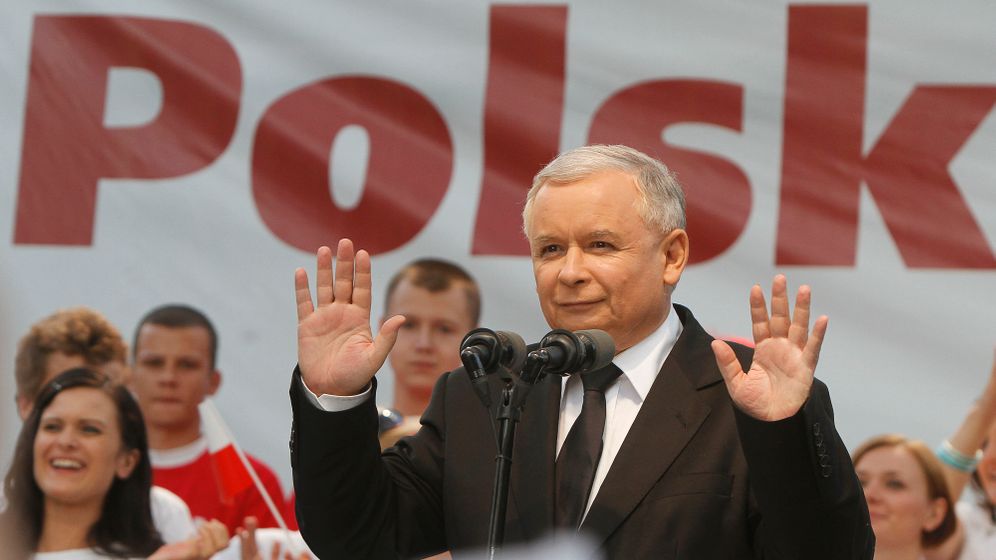 September 10 fell on a Saturday this year. In the early morning hours, Krakowskie Przedmiecie, one of Warsaw's most prestigious streets, was deserted. The booming city was still asleep, its boutiques and cafés closed.

A couple of red and white flags waved in front of the Church of the Assumption of the Virgin Mary and of St. Joseph. Despite the early hour, mourners were gathered here, as they do on the 10th of every month. Some of the faithful wore T-shirts bearing an image of deceased Polish President Lech Kaczynski. They had come to commemorate the plane crash 17 months ago in Smolensk, Russia, that claimed the lives of the Polish head of state, his wife Maria and 94 other politicians, church leaders and officers.

For these churchgoers in Warsaw, April 10, 2010 marked the culmination of a particularly Polish fate. Once again, the country became the innocent victim of tragedy. Some believe dark forces must have been behind it. One of the demonstrators was selling books titled "The Smolensk Attack," while another had sawed out letters and attached them to a banner that read: "Lead us!" It was unclear to whom the message was directed, the Almighty himself, or perhaps the memorial service's most prominent attendant: Jaroslaw Kaczynski, the former Polish prime minister and twin brother of Lech Kaczynski.

Shying Away from Crowds

Jaroslaw Kaczynski rolled up in a limousine with tinted windows. As always, he was dressed in black, and his face remained impassive, although the crowd greeted him with applause. One supporter pressed a crucifix into his hand, fashioned from the bier that bore the coffin of Poland's independence hero Józef Pilsudski in 1935.

Inside the church, Kaczynski, 62, sat in the front-most pew as the priest delivered a sermon about Poland, the nation singled out by God. After mass, Kaczynski hurried the few steps to the presidential palace, the rest of the crowd in tow, and laid a wreath there, as he does on the 10th of every month.

For those on Poland's political right, most of them devoutly Catholic nationalists, the tragedy in Smolensk has long since become a religiously charged myth, with Jaroslaw Kaczynski its representative here on Earth.

Yet the hero worship surrounding him, the lonely twin, appears almost embarrassing for the remaining brother, who's not a vain person and doesn't enjoy the spotlight. He had already returned to his limousine by the time the devout began singing patriotic songs. Kaczynski shies away from crowds -- even this crowd, which is made up of his most devoted followers, his voter base.

He certainly could use these voters' help. Current polls predict that his Law and Justice (PiS) party will receive between 20 and 30 percent of the vote in the upcoming parliamentary elections on October 9. The days of the Kaczynski twins as Europe's enfants terribles seem to be over. Their cantankerous nationalism appears to have fallen out of favor in Polish politics today.

Jaroslaw Kaczynski's opponent, incumbent Prime Minister Donald Tusk, looks to be headed toward victory together with his center-right Civic Platform. Tusk has led the country through the global economic crisis unscathed, and Poland has evolved into a respected EU partner under his watch.

The best tack for Jaroslaw Kaczynski would be to mobilize those who remain discontent despite these successes, those who feel they've been passed over by Poland's economic miracle, but he's having trouble doing it. Since the death of his brother Lech, it has become even clearer that Jaroslaw is much less effective politically without him. Much of what he says fails to ring true, and he can't seem to find his way into the mainstream.

Kaczynski is certainly trying to give his party a more youthful image. The PiS party ticket now boasts a few beautiful young women calling themselves "Kaczynski's angels," and he's had himself filmed with the children of several PiS members of parliament. Yet while the role of the benevolent father of the people, courting young women and kissing babies, might have been believable coming from his brother, Jaroslaw himself draws only pitying smiles.

Journalist Adam Michnik once referred to the Kaczynski twins as a "two-man party." Known since the days of the Solidarity trade union as the "big duck" (Jaroslaw) and "little duck" (Lech), because of the similarity of their surname to the Polish word for duck, the brothers were always outsiders. They were razor-sharp but headstrong in their political analysis, and belligerent in their demands.

But they benefited as the energy from the country's 1989 revolution started to run down in the late 1990s. In 2005, the twins won first the parliamentary election and then the presidency, giving them Poland's two highest political offices and forming probably the most bizarre political team in Europe.

"They were each other's equal," says Michal Karnowski, a journalist considered one of the best informed observers of the Kaczynskis. Karnowski was born a twin too, and he and his brother Jacek, who is also a journalist, host a TV show. The Karnowskis are even more difficult to tell apart than the Kaczynskis were.

Lech Kaczynski once turned to Michal Karnowski at a reception and asked how many times a day he talked with his brother on the phone. "At least 10 times," Karnowski answered. At which point the president turned back to his wife and said: "See? I'm normal."

Twins, Karnowski says, are a single person, and one twin's wish is the other's command.

'The Visionary Behind the Scenes'

Still, Lech and Jaroslaw led astonishingly different lives. Lech was married. His grown daughter Marta is divorced and remarried to a lawyer with past ties to a left-wing party -- not exactly an ideal family history for a nationalist and a Catholic.

Jaroslaw, on the other hand, remained a loner and still lived with his mother until recently. "Jaroslaw was more the visionary behind the scenes, while Lech held the offices," Karnowski says.

For a time, it seemed as if the Smolensk tragedy had changed Jaroslaw. The funeral ceremonies were barely over before he announced his candidacy for the position of president, saying he wanted to take the place of his dead brother. A team of young helpers organized his campaign. Kaczynski, who had previously been known for his talent for polarizing, heeded his young advisers and claimed to be reformed, promising to end the "Polish-Polish war." The sentiments were well received. Kaczynski lost to Bronislaw Komorowski, the acting president, by only a slim margin, winning 47 percent of the votes in the election's second round.

But just two weeks later, Jaroslaw was his old self again. The rookies who had advised him were "traitors" and he threw them out of the party, now claiming he could have won if only he'd manage to sufficiently highlight the government's share of the responsibility for the tragedy in Smolensk. According to the PiS's party line, Prime Minister Tusk was responsible for failing to replace the government's decrepit old airplanes with newer models.

Marek Migalski, 42, formerly a PiS member of the European Parliament, is another who has fallen out of favor. "Lech kept Jaroslaw connected to real life," says Migalski, who holds a doctorate in political science. "Without him, Jaroslaw overdoes it."

There's some truth to that. Lately, Kaczynski's attacks have been putting off even his biggest supporters. This spring he accused the ethnic German minority in Poland's Silesia region of being agents of a neighboring state bent on historical revisionism. In reality, the ethnic German Silesians are politically harmless, more interested in preserving local traditions than rewriting history books.

When the prime minister initiated rapprochement with Russia following the tragic plane crash, Kaczynski declared that Tusk had surely already made an arrangement with Putin to banish him to Siberia. Apparently, it was meant to be a joke.

In June, he declared his doubts that it was really his brother in the alabaster sarcophagus in Krakow's Wawel Cathedral, implying that the Russians had distributed the victims' remains at random among the coffins.

By now, though, most of Poland's population has grown tired of the overheated debate about the Smolensk catastrophe. In other words, it probably wasn't such a smart move on Kaczynski's part to fill half his party ticket with family members of Smolensk victims, all of them newcomers to the political arena.

"At this point, the issue of Smolensk is only convincing those who were already convinced," says Migalski, the former member of the European Parliament. "It's not going to win any new voters."