It is not everyday that a small legal practice receives a visit from a domestic security agency. So Tomasz Wlodarski, the director of Environmental Law Service Poland, said he was surprised when Poland's equivalent of the FBI paid him a visit in the fall. Even stranger, the officers asked for nothing that hadn't been previously published about the organization.

"Harassment is a big word," said Wodarski, "But these are actions that may cause people to feel pressure."

His organization was not the only one to have been called on. And government officials have done their part via the press. In October, Poland's Treasury Minister Mikolaj Budzanowski criticized an anti-coal environmental organization by telling a local newspaper that the NGO "should accept that there are limits to its activities," and that "they have exceeded their limit." Those statements caused about two dozen NGOs to write a scathing letter to Prime Minister Donald Tusk regarding what they called an "unprecedented attack" on Polish society, according to the European news website EurActiv.

The apparent pressure on environmental groups, while concerning, does not seem inconsistent with Warsaw's approach to issues relating to climate change. On Monday, coal-dependent Poland continued its virtually solitary opposition to a widely-supported -- and badly needed -- short-term fix for Europe's carbon-trading system, the continent's flagship policy in the fight against global warming. Such obstreperousness, however, has not led to Poland's being internationally ostracized. On the contrary, even as the country helped block Europe's ability to present a unified front at the recent climate change conference in Doha, Poland was chosen to host the next conference in 2013.

It is a decision which seems destined to make next year's conference, aimed at fashioning a global pact to reduce greenhouse gas emissions, just as unsuccessful as in years past.

The pessimism is born of Poland's ongoing addiction to coal -- and of the government's own interest in the status quo. Recently, Tusk told a press conference that "energy is the key to politics." And in Poland, there is little difference between the two. Despite communism having crumbled almost two-and-a-half decades ago, much of the energy industry in Poland remains under government control. Though many of the largest energy companies have been ostensibly privatized, the Polish treasury often retains a significant stake.

"There is a vested interest in maintaining the current power system, so the renewable energy system is too dispersed to benefit the right players in the system," said Michael LaBelle, a professor at Central European University in Budapest who teaches energy policy. "They are coal-aholics, that's the best term to use, it's horrible but it's true."

Poland is the 10th largest consumer of coal in the world and produces 92 percent of its electricity from coal, according to the World Coal Association. And despite EU targets for curbing greenhouse gas emissions, Poland is pressing forward with plans replace old coal plants with massive new ones.

That doesn't mesh well with Europe's CO2 emissions reduction plans. As Europe's emissions trading system grows and becomes more comprehensive, carbon should get more expensive. But Poland has responded by both fighting against making fixes to the European Emissions Trading System (ETS) -- which has been crippled by chronically low prices for emissions certificates -- and against more ambitious goals for reducing carbon emissions. Warsaw has also pushed to get extra pollution allowances for new and existing plants.

"This is a situation in Poland, now, where the government is pushing state-owned companies to build new coal-fired power stations," said Marcin Stoczkiewicz, a lawyer with ClientEarth, a leading environmental law organization in Europe. "Sometimes those investments are not developing in line with environmental law, especially with EU environmental law."

'An Attack on Our Organization'

ClientEarth has not made too many friends in the Polish government. While Stoczkiewicz said his organization's offices in the Polish capital have not been visited by the police, the group was the target of Treasury Minister Budzanowski's October comments.

"This represented an attack on our organization and other civil organizations," Stoczkiewicz said. "The climate of the conversation changed. It seems that the government is trying to push for coal, for dirty investments, even if they are investments which break the law."

The push is also an international one. This year, Poland has twice vetoed new greenhouse gas reduction targets. And while those vetoes may ultimately be circumvented, Poland is also standing in the way of making the European Emissions Trading System work. The system involves gradually lowering the number of carbon emissions certificates on the open market, thus slowly making it more expensive to release carbon into the atmosphere. But the market is currently glutted, leading to a price-per-ton of emissions of just €7.13 on Friday, well below where it needs to be to act as a disincentive.

There is a united front across Europe -- one that includes not just leading European politicians, but also large utility companies and oil firms including Shell -- which agrees that a fix is necessary. And a short-term fix, involving the temporary reduction of emissions systems on the market, is on the table.

Poland, though, is not part of that broad front. On Monday, Poland claimed that the proposal to amend the ETS, known as "back-loading," would cost the country more than €1 billion over the next seven years, according to the news site European Voice. It is a statement consistent with Poland's outspoken stance that the ETS should not be tampered with, even as the need to fix the system has become more urgent.

"The Emissions Trading System is working as a tax with the highest burden on countries like Poland," Polish Environment Minister Marcin Korolec said in an interview with SPIEGEL ONLINE. "We are already at the limit of what our industry and citizens can pay."

Still, it seems unlikely that Poland can avoid facing up to the problem on the long term. Even as CO2 emissions are currently cheap, the price will almost certainly rise in the future, putting pressure on Poland to lower its own output of the pollutant. The current situation, which sees the country relying on power from dirty, Soviet-era coal-fired power plants that have long since been paid for and are cheap to operate, cannot continue indefinitely.

Yet a greater emphasis on natural gas, which is cleaner than coal despite still being a fossil fuel, is problematic for the country. Much of Europe's supply of natural gas comes from Russia, a country that Poland historically distrusts. What willingness exists in Poland to pursue natural gas is focused primarily on drilling for shale gas in the country.

More Coal Plants on the Way

And when it comes to developing renewable energies, there is frustration in the environmental community. Many say that Poland's stance on renewable energy seems to come more from ideological issues than from a studying long-term economics and viability. Julia Michalak, a policy officer for Climate Action Network Europe, said that the strong mining lobby aligned with government combined with Warsaw's emphasis on energy security add up to a policy of blocking and fighting climate policy from Brussels.

"What is needed is a very robust and detailed analysis of both costs and benefits," Michalak said. "So far I haven't seen it."

Coal, in short, appears to be Warsaw's only strategy when it comes to energy. And the Polish government is moving forward with major investments in coal-fired power plants, planning to spend €24 billion in the energy sector over the next eight years with much of that earmarked for 11,300 megawatts of new coal plants -- an amount equivalent to Israel's peak electricity usage during a heat wave.

"Our economy is dependent on electricity produced by coal," said Stoczkiewicz. "This is the fact. But the policy should be to change this bad energy mix and try to find cleaner sources of energy."

Such a change, though, doesn't seem to be in the country's near future. 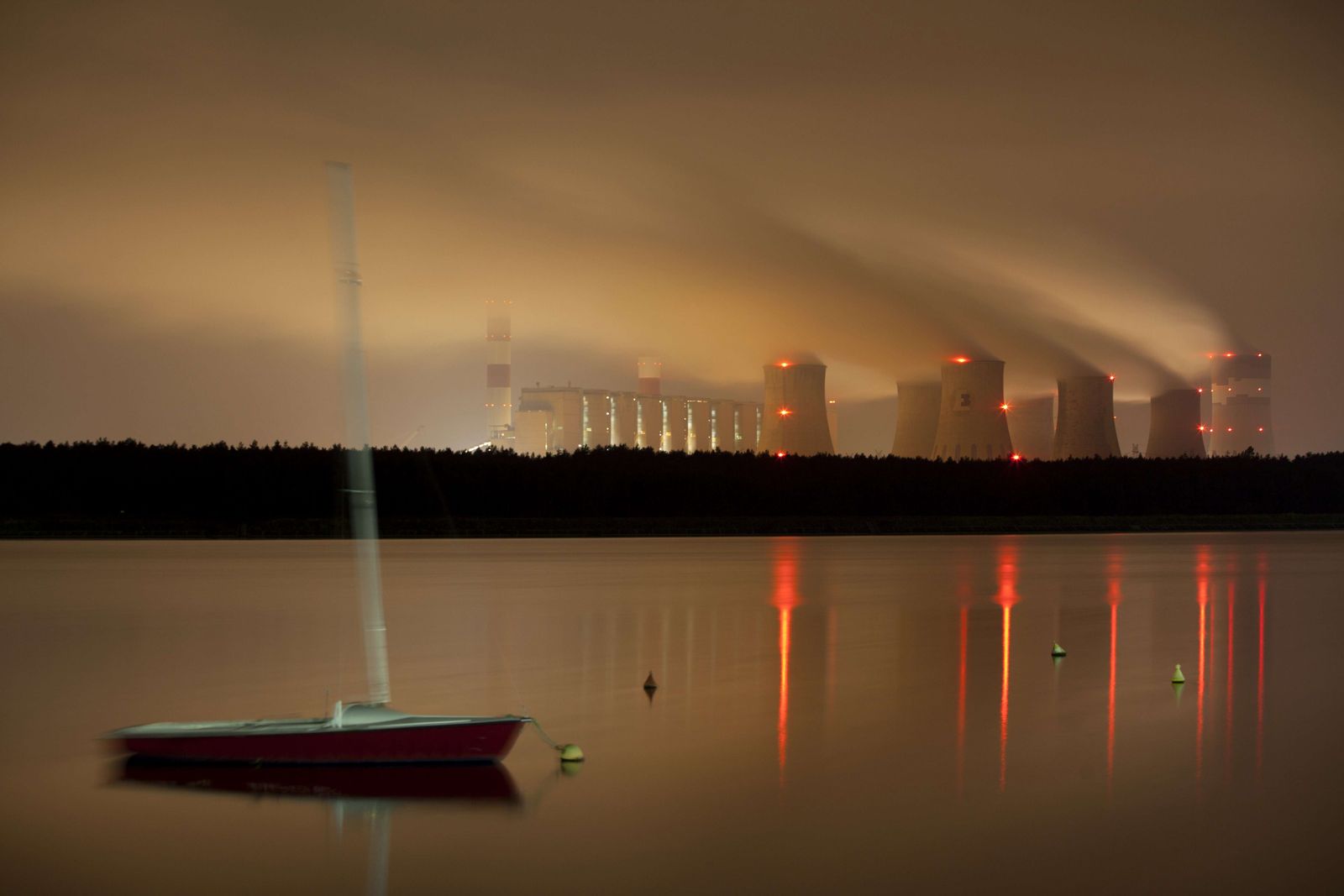 The Belchatow coal-fired power plant near Lodz is one of the world's largest.