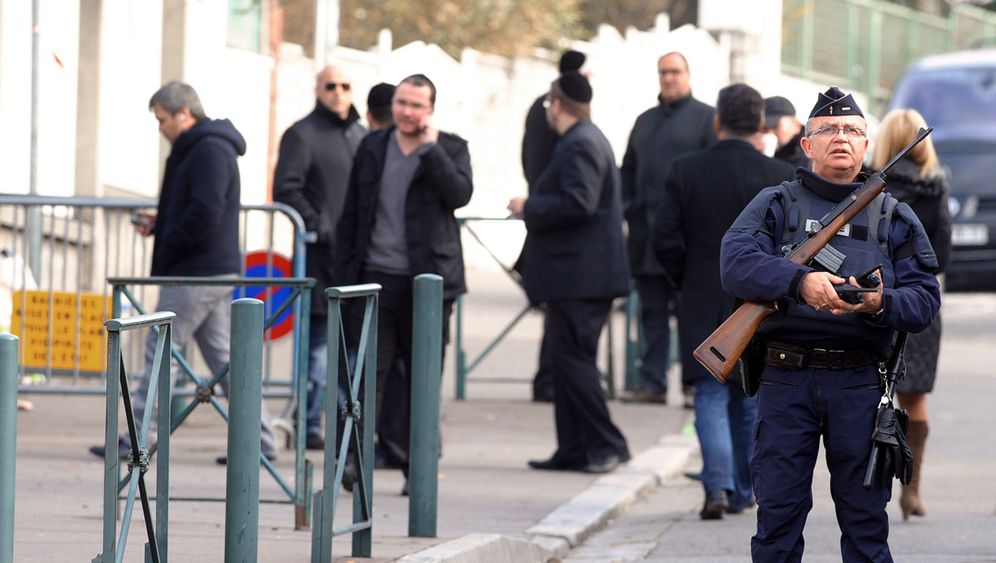 The neighborhood near Toulouse railway station where the Rue Jules Dalou is located is shabby and depressing. The houses are narrow and mostly only two stories high. There are no gourmet shops or chic boutiques. It's a long way from the image of France that you see in the tourist brochures.

On any normal evening, the area would be deserted at 10 p.m., but this is not a normal evening. Since Monday morning, nothing in Toulouse is normal. That was when an unknown perpetrator on a motor scooter drove into the Rue Jules Dalou and shot dead three children and a teacher.

The shooting took place in front of and inside a Jewish school, the Collège et Lycée Ozar Hatorah. Now, photographers, cameramen and reporters are gathered in a crowd outside the cordoned-off building. Local residents, students and friends have placed flowers at the entrance, where the killer fired the first shots. "You will always be angels," is written on one of the notes.

A group of young men comes out of the school grounds. They are former students who rushed to the scene after hearing the news of the murders to lend their support to relatives and friends. They are clearly stunned, and are speechless when faced with the reporters' questions.

According to witnesses, the perpetrator fired indiscriminately at everybody who was in his vicinity. Even more unsettling is the fact that the killer is clearly a serial offender. Within the space of eight days, three paratroopers in Toulouse and Montauban were killed with the same weapon, an 11.43 mm pistol, which was also one of the guns used in Monday's shooting. In each of the cases, the perpetrator arrived on a motor scooter and killed in cold blood.

It is still unclear how the incidents are connected and if there is a terrorist motive behind the attacks. The three soldiers who were killed served in a unit that has also been deployed to Afghanistan. On Monday, French President Nicolas Sarkozy raised the terrorism alert level in the region to its highest level.

A racist motive is also conceivable. The three murdered soldiers were of North African origin, while the victims in the school shooting were all Jewish. A soldier of Caribbean descent was also injured in one of the attacks.

In Toulouse, the theory is circulating that the perpetrator could be a former soldier who was expelled from the army because of neo-Nazi activities. Indeed, the Montauban-based 17th Parachute Regiment, which two of the murdered soldiers belonged to, had problems in 2008 with a number of right-wing extremists. According to a report in the magazine Le Point, three men were thrown out of the regiment at the time because they had made Nazi salutes, among other offenses.

According to the theory, one of these ex-soldiers might now be looking for revenge by attacking paratroopers with Arab and Caribbean roots and the Jewish children and teacher. The nature of the attacks supports the theory that a former soldier could be the perpetrator. Witnesses reported that the killer acted with cold-blooded self-assurance and fired his shots with precision.

Investigators have few personal details about the killer. He kept his motorcycle helmet on at all times during the attacks. One witness claims to have seen a distinctive tattoo on the man's cheek when he briefly raised the helmet's visor. During the attack near the paratrooper barracks in Montauban, he left a gun magazine at the crime scene. Police were unable to find any traces of DNA, though.

It's possible that the investigators in Toulouse, who are now receiving support from dozens of experts who have arrived from Paris, may be able to track the perpetrator using a data trail. The first murder victim, a 30-year-old sergeant, was probably contacted by the perpetrator via the Internet. The soldier had placed a small ad offering a motorcycle for sale. The killer apparently contacted him and arranged a meeting, where he shot the sergeant dead with the 11.43 mm gun.

The small ad website's server will probably contain the IP address that the murderer used, which could be traced to a telephone landline or mobile phone, assuming the killer wasn't logged on from an Internet café or used an anonymization tool to obscure his digital identity.

But the circumstances of that murder also cast doubt on the thesis that a neo-Nazi former soldier is behind the crimes. According to a report in the newspaper Le Figaro, the killer could not have known that the sergeant had North African roots. Neither the man's first nor last name was included in the ad, which only mentioned that a soldier wanted to sell a motorcycle.

One thing is clear: The killer must have a very good knowledge of the local area. While he was fleeing from the scene of the crime in Montauban, he drove through narrow side streets, where he attracted little attention and did not have any risk of landing in a traffic jam.

In the meantime, the police have increased their presence in the Greater Toulouse area, and one of the biggest manhunts in recent years is under way. Local residents are anxiously asking themselves what the killer is planning to do next.