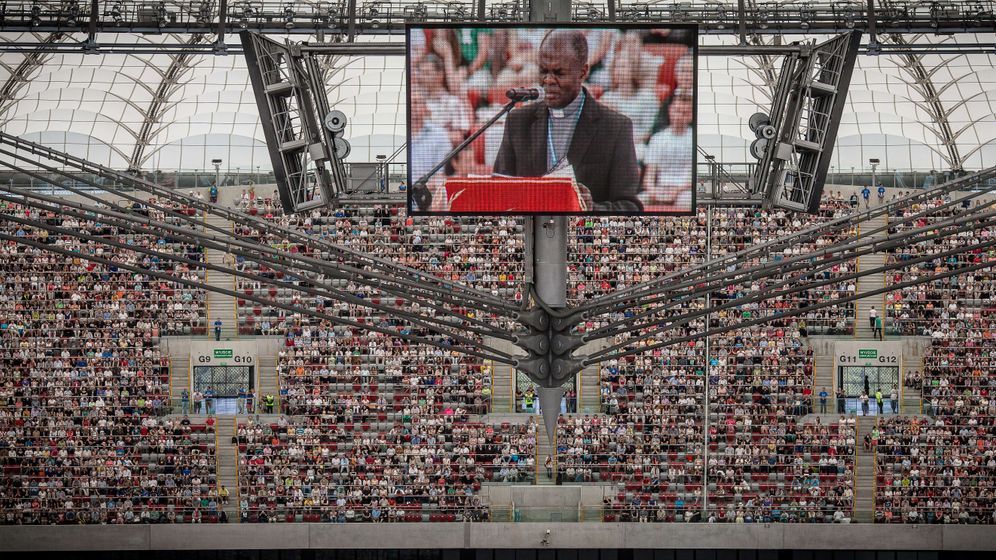 Photo Gallery: Driving out the Devil in Poland

While Pope Francis is trying to modernize the Catholic Church in Rome, priests in Poland organized a large event over the weekend that took on a somewhat atavistic tone.

More than 58,000 believers packed into the Warsaw National Stadium to see Father John Bashobora, a self-proclaimed exorcist, as he preached on Saturday. Known as a healer, the Ugandan priest drew a number of people in wheelchairs to the event, along with many others hoping to ease their pain.

Bashobora has a reputation as a "faith healer who has already driven the devil out of a number of people," one 54-year-old woman told news agency DPA. The woman, a recovering alcoholic, added that she hoped to be "permanently healed of this evil."

A 44-year-old farmer told DPA that he'd heard the guest priest had "driven out different physical and spiritual sufferings" among his followers. During the sermon, people afflicted with "Satanic revelations" were reportedly able to seek the support of "exorcists" in a special area set aside for the purpose.

Normally used for sporting events, the National Stadium in Warsaw was transformed into a giant church, complete with a heart-shaped stage and a giant cross about 15-meters (50-feet) tall. Organized by Henryk Hoser, bishop of the Catholic Diocese of Warszawa-Praga, the event attracted the stadium's largest crowd ever, according to Polskie Radio's English-language website, which reported that attendance topped that of the England-Poland football match there last year.

With some 500 priests on hand to hear confessions, the day included a holy mass, three speeches by Bashobora and prayers for healing. Bashobora, who has reportedly visited Poland several times in recent years, works for the Mbarara Diocese in Uganda, and also reportedly appealed to his followers at the ceremony for financial support to combat malnutrition and support educational programs in Africa.