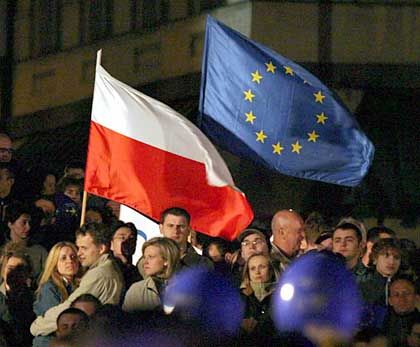 EU accession celebration in Warsaw in 2004: "The Germans must finally accept that we are a fully entitled member of the European community."

The Polish government has thrown a wrench into German Chancellor Angela Merkels efforts to jump-start the European Unions long-stagnant constitutional process with its adamant rejection of the "double majority" voting system that is currently outlined in the EU treaty. Despite a weekend of shuttle diplomacy that saw Merkel trying to persuade Polish President Lech Kacyznksi to come on board, Poland appears prepared to veto the landmark agreement at the EU summit in Brussels this Thursday and Friday that will be hosted by Merkel.

Warsaw is demanding a replacement of the proposed decision-making system of the European Council, which allocates votes in proportion to the population of member states, with an alternative "square root" system, which would increase Polands voting weight in relation to its more populous EU neighbors like Germany and France.

SPIEGEL: After his discussions with your government last week, Austrian Chancellor Alfred Gusenbauer told the Süddeutsche Zeitung newspaper, One gets the impression that Polands leadership under the Kaczynski twins will not allow the Germans success in reviving the (EU) reforms. Is that true?

Muszynski: That is of course a misunderstanding. It is not true that Poland is unwilling to allow the German presidency of the European Council a success. We would welcome a success, because a success for the presidency of the European Council is also a success for the EU. It is also untrue that Poles reject reforms. In fact, the voting mechanisms in the Council of Ministers have nothing to do with the reforms. Our concerns regard the distribution of power within the EU and our ability to influence the EUs development. Reforms, on the contrary, are material areas. Why should Poland agree to a decrease in its influence? We arent idiots. Anyone surprised by the fact that we would like to increase our influence should not be engaged in politics.

SPIEGEL: How would you explain the hard-line stance of your government that threatens to isolate it within Europe?

Muszynski: Everyone wants to be rich and beautiful. There is no reason here for isolation. The summit will also focus on other issues, some of which Poland has suggested. Supposedly we are also a full-fledged member of the EU, so we too have the right to suggest a topic for discussion. The disquiet triggered by the Germans has nothing to do with the EU reforms. The German government should take up a constructive attitude, because at the moment it seems only to be striving for power within the EU. But integration is a process of reforms -- and whatever happened to the discussion in this area?

SPIEGEL: How is it that Polands population -- with an EU approval rating of 86 percent -- is so much friendlier towards the EU than the Polish government? Are there circumstances under which you could imagine abandoning the billions of euros your country is now receiving from Brussels?

Muszynski: The Polish government stands 100 percent behind the European Union. Achieving membership in the EU was surely one of Polands greatest successes in recent years. What counts for society are the visible results. What matters for a government, though, are the details and the possibility of achieving those results. When a governments ability to act is restricted, popular support for the EU also declines. In calling for the influence that we are entitled to, we are representing and protecting the interests not just of Poles, but also of the EU within Poland. I would also remind you that we waived the reduction of membership contributions in order to join the EU. We are paying 100 percent of the contributions, and in certain areas we are only receiving EU subsidies at a level of 30 to 50 percent. 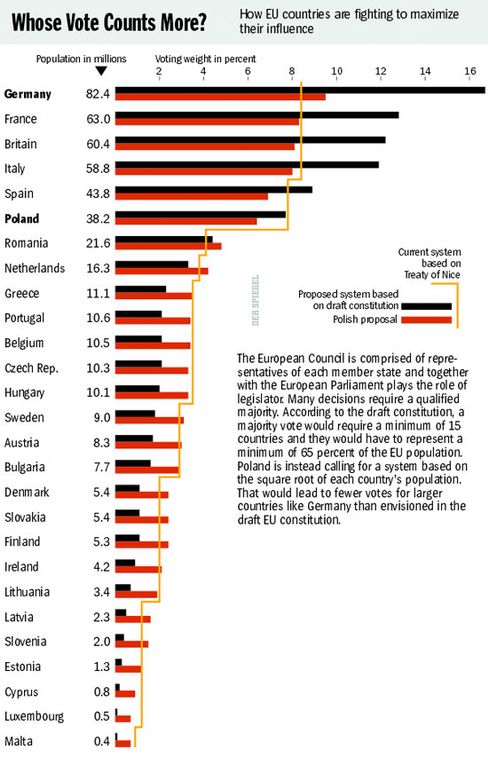 SPIEGEL: When Moscow boycotted Polands meat exports to Russia on spurious grounds, Europe remained united and defended the Polish position. Many Europeans now feel that one should expect solidarity from Poland with regard to the EU constitution. Do you see that differently?

Muszynski: That was a duty that Brussels was obliged to fulfill. The regulation of collective trade policy lies exclusively under the jurisdiction of the EU. Please stop presenting Europes duties in such a propagandistic manner by evoking them as generous favors. For almost one and a half years, Brussels remained silent as Poland was discriminated against. We know (EU) community law.

SPIEGEL: Outside of possible support from the Czech Republic, do you have another ally in your proposed reweighting of the EU Council's proportional voting system, the "square-root" revision? And why is this so important to you?

Muszynski: Only the course of the proceedings will reveal how many countries support the proposal. The question of the vote is very important to us. We too would like to have the chance to influence the future of the EU -- we too are Europeans, no less than the Germans. Recently, perhaps, we have even been better Europeans, given the growing German sentiment against European integration. The leadership of the Federal Republic is diverging from Helmut Kohls pro-European policies. Rather than addressing issues of substance, the German presidency of the European Council expends most of its energy on expanding its own sphere of influence in the EU. In addition, sociological studies have consistently shown greater approval of the EU in Poland than in Germany.

SPIEGEL: Many Germans are saddened by the obvious deterioration of relations with Poland. What did Berlin do wrong, and what do you expect from the Germans?

Muszynski: Many Poles are just as saddened that the Germans have not treated them as equal partners. Still, relations between our countries are not bad. We are simply working through a process that is now bringing these relations closer to reality. The Germans must finally accept that we are a fully entitled member of the European community.

SPIEGEL: You don't think the Germans have accepted this?

Muszynski: We expect more consideration of Europe from the Germans, more actual reforms and less national egotism and flowery rhetoric. All that they have displayed is how to fight for ones own interests, by overstepping their budget deficit four times without any penalty, and by being the first to reject the EU guidelines for services within the European market. Now the Germans want to secure more power in the European Council, no matter what the price. We are supporters of a common foreign policy -- including policies for Eastern Europe -- a collective energy policy and a European army. We aspired to such a community when we joined the EU. The Germans have disappointed us. They could learn from our example how to act as Europeans. Germany is no longer the paragon of Europe.

Translated from the German by Will Byrne.