Andrei Deshchytsia, foreign minister in Ukraine's transitional government, taps the note cards on the table in front of him and begins to speak. He is nervous, his "th" in English sounds more like a D and his Rs roll a bit too much. But his words are polite: He says that it is good to have a neighbor who "understands us."

Seated across from him is his Polish counterpart Radoslaw Sikorski. He waits patiently until his Ukrainian colleague is finished before quoting an old Polish proverb: "Only in poverty do you realize who your true friends are." Poland is Ukraine's friend, he says before adding: "We are strategic partners."

The foreign minister from Warsaw is everything that Deshchytsia is not. Having studied in Oxford, he speaks perfect English. And he knows exactly what he wants. Kiev, he says, must push through reforms, battle corruption, improve the control of its borders and do everything in its power to stop the bloodshed in eastern Ukraine. And, he demands at the end, the Ukrainian government should finally eliminate import quotas for Polish products.

Married to US journalist Anne Applebaum, Sikorski, 51, has led the Polish Foreign Ministry since 2007. But his role in the European Union and its relations with its eastern neighbors has become much more crucial since the eruption of the crisis in Ukraine. Europe's history, he warned before anyone else, would be decided in Ukraine. At the time, though, nobody listened: not the French, who were more interested in the Mediterranean, and not the Germans, who were blinded by their efforts to maintain positive relations with the Russians.

But Sikorski was right. And now, this man who once couldn't return to his home country because of martial law imposed by the communists wants to prevent a neo-Soviet shadow from being cast across Eastern Europe. Which is why Ukraine has become his most important mission. In recent weeks, he has been a frequent visitor in Kiev. He has also shuttled between Brussels, Berlin, Warsaw and Kiev, often accompanied by his German and French counterparts, Frank-Walter Steinmeier and Laurence Fabius. In February, the trio mediated between Maidan protesters and the regime of ousted President Viktor Yanukovych with Sikorski, in his custom-tailored suit, visiting demonstrators in their smoky tents and speeding through the streets of Kiev in an effort to find the president. It was a successful visit, with Sikorski helping to hammer out a compromise deal aimed at ending the chaos in the Ukrainian capital -- only to watch it all fall apart within 24 hours.

Embedded with the Mujahedeen

Now, Sikorski hopes that a civil war can be prevented. Above all, though, he hopes that NATO and the EU will finally take off the kid gloves in their dealings with Russian President Vladimir Putin. He wants to see the West stand up to Moscow and, if necessary, threaten the Russians militarily.

Many Poles are pleased by their foreign minister's decisiveness in the crisis. The Warsaw-based magazine Newsweek Polska said that, following Sikorski's lead, Poland is finally pursuing realpolitik in Europe. His predecessors, the publication wrote, always played the victim role, acting as though they were dependent on the bad consciences of its neighbors. Though perhaps Sikorski's timing helped: He came into office just as the wounds of the Iron Curtain were finally fading. Poland became a member of NATO in 1999 and joined the EU in 2004.

Sikorski became involved in the anti-communist resistance as early as grade school. When the country's communist leaders in 1981 quashed Solidarnosc (Solidarity), imposed martial law and arrested thousands from the opposition, Sikorski was in Great Britain. He stayed there, going on to study philosophy, political science and economics at Oxford.

After earning his degree, he worked as a journalist, reporting for British magazines and newspapers from Afghanistan, where he spent months accompanying the mujahedeen in their fight against the Soviet army. He also won a World Press Photo award for one of the images he took there.

Soon, though, merely writing about world events wasn't enough for Sikorski. He wanted to be one of the decision-makers and initiate change. In the 1990s, he entered politics and became deputy defense minister. An early goal was that of ensuring that Poland would not be relegated to the role of a second-class member of the NATO alliance. He was particularly bothered by the fact that the trans-Atlantic alliance did not maintain a base on Polish territory yet the country's military was nonetheless expected to contribute to foreign missions such as the one in Yugoslavia.

It is an issue that continues to bother him today. NATO, he says, "has grossly neglected its eastern flank," he said recently. Because the alliance was wary of offending Russian sensibilities, it refrained from establishing bases in Poland or the Baltic states.

Sikorski believes that Russia perceives such solicitude to be a sign of weakness adding that in Ukraine, Moscow is now testing just how far it can go. Like so many who grew up during the Communist era, Sikorski has deep distrust for Russia. He considers Berlin's position to be too yielding, and it has certainly been a bone of contention in Warsaw-Berlin relations for some time now.

Inspired By His Wife

"The Red Army was deterred by a large number of American soldiers, weapons, tanks and nuclear weapons. Diplomacy had nothing to do with it." This is a sentence that comes not from Sikorski, but from a recent editorial penned by his wife Anne Applebaum that ran in Germany's Die Welt newspaper. People close to the couple say she inspires his foreign policy plans and strategies.

Applebaum is a critically acclaimed expert on Soviet history and received the Pulitzer Prize for her book "The Gulag." Her most recent tome, "The Iron Curtain," describes the early era of the Eastern Bloc and the methods employed by totalitarian systems.

Applebaum believes the Iron Curtain only fell because the West ultimately proved to be militarily stronger than the East -- and less because the German Ostpolitik had been so successful. It's an estimation shared by her husband. And it is why Sikorski now says it is a mistake for Berlin to delay in imposing tough sanctions on Russia.

The Polish-American couple first met in 1989. Radoslaw Sikorski had just returned to Poland and on Nov. 10, the two found themselves waiting for a scheduled press conference by German Chancellor Helmut Kohl in Warsaw. But with East Germany having opened the Wall the night before, Kohl immediately returned to Berlin. Sikorski and Applebaum, both journalists, waited in vain for him in the press center before deciding to drive together to the German capital. "We spent nine hours on bad roads in my unbelievably small Daihatsu," Applebaum recalls.

Since then, the two have become something of a Camelot story in Polish politics. They have two children and live on a farm near Bydgoszcz, one of Poland's most important industrial centers. The white mansion has columns at the front entrance and is surrounded by a park. In Poland, Applebaum is better known for a cookbook she wrote with her favorite Polish dishes than she is for her political work.

Among the guests who attended Sikorski's 50th birthday one year ago was actress Olivia Williams, a former girlfriend of Sikorski's who played in, among other films, "Ghostwriter," directed by Roman Polanski. Speaking of Sikorski, Williams told a Polish women's magazine that she had been fond of the ambitious student at the time.

But Sikorski's worldliness, his polished English and his intellectual wife are all attributes that aren't always appreciated by a good number of Poles. Three years ago he sought his party's nomination as its presidential candidate. In a critical vote, however, his party, the liberal-conservative Civic Platform, nominated Bronislaw Komorowski instead. He's the kind of man one could imagine always sitting "at home with a bowl of warm soup," a Warsaw newspaper once wrote of Komorowski, highlighting his down-to-earth image. With his British aloofness, that is hardly something one could say of Sikorski.

Sikorski instead sees his future at the head of a top international institution. He wouldn't say no, for example, to the post of NATO secretary general -- and his prospects likely aren't bad. Though former Norwegian Prime Minister Jens Stoltenberg was recently tapped to take over NATO leadership later this year, Sikorski could generate significant support five years from now. Fifteen years after Poland, the Czech Republic and Hungary joined the trans-Atlantic pact, there are some who believe it is time for an Eastern European to take the helm. It is also likely that Sikorski would be a candidate palatable to the Americans. From 2002 to 2005 he served as the director of Washington's American Enterprise Institute, one of the US conservatives' most important think tanks.

Despite all his professional and private ties to the country, Sikorski is in no way a blind supporter of the US. Right at the start of his term as foreign minister, Sikorski declared that Washington had provided Poland with too little in return for its participation in Iraq, where Warsaw had been responsible for its own occupation zone in the country. He also criticized President Barack Obama for abandoning US plans for a missile defense system in Eastern Europe.

He recognized very early on that, compared to the Pacific region or the Middle East, Europe is becoming less and less important to the United States. It is thus hardly surprising that he has called on Berlin to show greater leadership during the past three years. Two years ago, Sikorski said it is "not German tanks" that present the greatest threat to Poland today, but rather the threat of the "collapse of the euro zone." It was a revolutionary statement for a prominent Pole.

Back in Kiev, though, the focus is on a different danger, and once again Sikorski has been called in to mediate. During a recent visit to the Ukrainian capital, his convoy rushed past Independence Square. Heavily armed police guarded the area around the presidential palace; in front of the building, a few hundred people could be seen protesting. They waved Ukrainian flags and demanded that the West not abandon their country.

Sikorski climbed out of his sedan, waved and climbed the stairs. If it wasn't already clear then, it certainly is now: Poland has firmly become a part of the West. 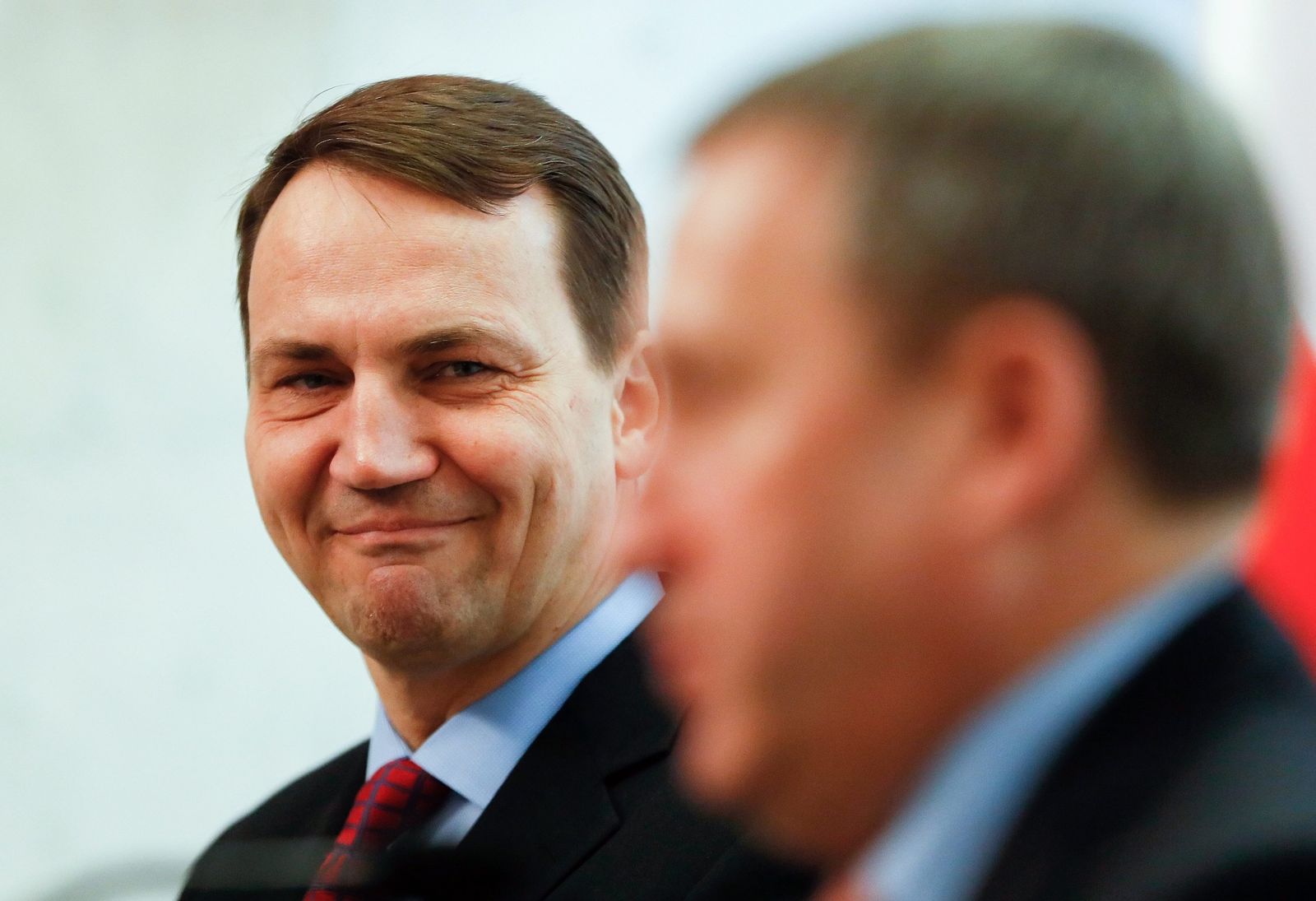