Since the death of his twin brother in the Smolensk tragedy, former Polish Prime Minister Jaroslaw Kaczynski has attracted attention for his wild speculation about the causes of the plane crash, which claimed the lives of 96 people, including many members of Poland's elite. Indeed, many Poles have become increasingly tired of his paranoid rhetoric.

Now, just days before Sunday's parliamentary election in Poland, Jaroslaw Kaczynski has grabbed the headlines with a whole new batch of conspiracy theories. And this time he's writing about Poland's neighbor Germany.

Among the wild claims in his new book, "The Poland of Our Dreams," Kaczynski suggests that Berlin would like to annex the areas in western Poland that used to belong to Germany until the end of World War II. "(German Chancellor Angela) Merkel belongs to a generation of German politicians that would like to reinstate Germany's imperial power," writes Kaczynski. "A strategic axis with Moscow is part of that." Poland can only be an obstacle in that respect, he continues, adding that Germany would need to "subdue our country, one way or another."

He also expressed his opposition to German investment in western Poland. "We could wake up to a smaller Poland one day," he warns.

Most outlandishly, Kaczynski also insinuates in the book that the feared East German secret police, the Stasi, could have helped Merkel, who grew up in East Germany, gain power. "I don't think that the awarding of the chancellorship to Angela Merkel was pure chance," he writes -- conveniently ignoring the fact that Merkel became chancellor in 2005, some 15 years after the Stasi ceased to exist.

When asked about the claim in an interview with the Polish edition of Newsweek, Kaczynski cryptically remarked that Merkel "knows what I want to say." When pressed by the interviewer, he suggested they "drop the subject."

The comments have raised eyebrows in Poland. "It's a very strange statement, because Chancellor Merkel won democratic elections," said Polish Foreign Minister Radoslaw Sikorski. "I believe Kaczynski is showing that he no longer really believes that he will be prime minister again." The comments, he said, would make it impossible for Kaczynski to "function normally in European politics."

"The suggestion that some kind of dark forces were behind the election of the chancellor in a neighboring country, and not the votes of the electorate, is not only an insult to the chancellor herself, but also to the German voters," wrote the left-leaning newspaper Gazeta Wyborcza in an editorial.

The new broadsides seem like a return to the days of 2005-2007, when Kaczynski's conservative Law and Justice party were in power and ties between Poland and Germany suffered a major setback. Politicians and media on both sides traded insults, including the famous depiction of the Kaczynski twins as potatoes by Berlin's notoriously irreverent left-leaning newspaper Die Tageszeitung.

Relations between the two countries have recovered since Donald Tusk became prime minister in 2007. Kaczynski criticized that development during his election campaign, accusing Tusk's government of having "raised the white flag."

Poland is holding parliamentary elections on Oct. 9, and the race appears to have tightened in recent days. The latest polls show Prime Minister Donald Tusk's center-right Civic Platform at between 31 and 35 percent, ahead of Law and Justice which is polling at between 21 and 28 percent. But Civic Platform's lead over Law and Justice has been narrowing, and some observers see an outside possibility that Kaczynski could still win.

With reporting by Marta Solarz in Warsaw 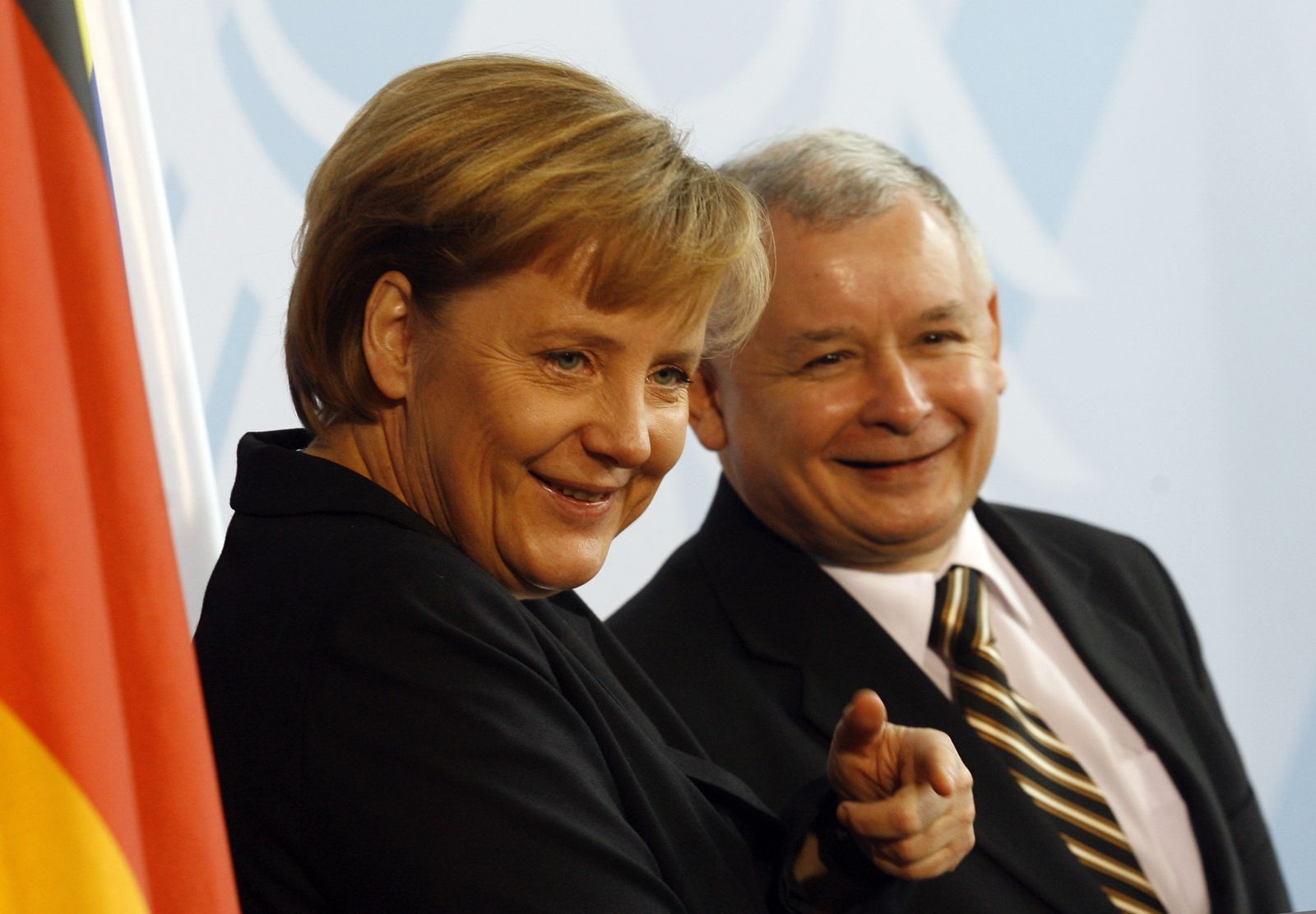 Angela Merkel and Jaroslaw Kaczynski in happier days back in 2006.