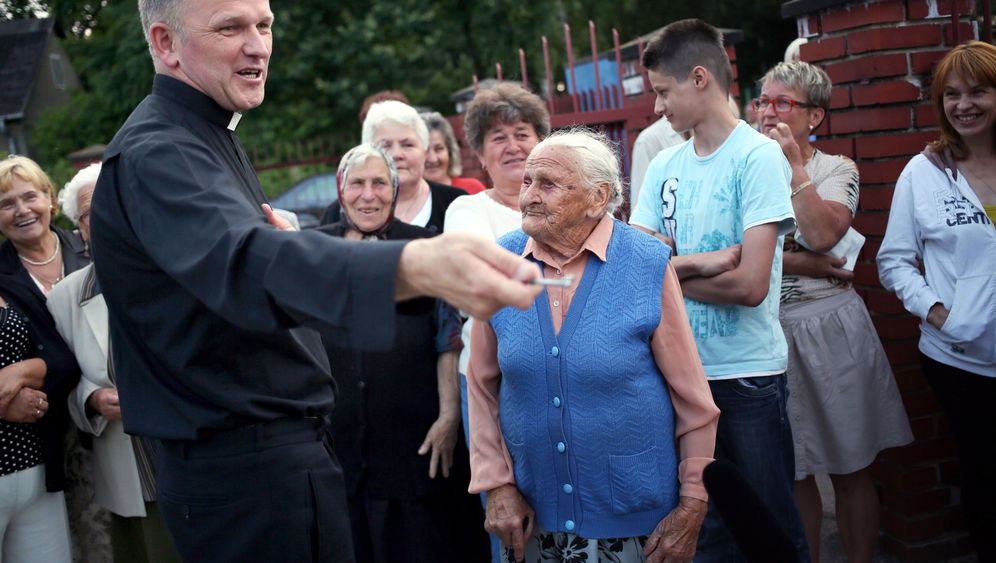 Pastor Wojciech Lemanski stepped up to his small pulpit on Wednesday morning to hold what may be his last sermon at his church in the town of Jasienica near Warsaw. The slender cleric, with his close-cropped gray hair, has become a household name in Poland in recent weeks. Newspapers have run stories about him and he's been a topic of discussion on television in what has been dubbed "Pastor Lemanski vs. the Curia." The case shows that support for the church is even crumbling in devoutly Catholic Poland.

Lemanski, who was ordained in 1987, was never a compliant priest. He repeatedly used his pulpit and his blog to voice his criticism of the church. He has accused the church leadership of not doing enough to oppose anti-Semitic tendencies among Poland's Catholics. He has also critcized the establishment's lenient treatment of clerics accused of sexual abuse, and its fierce rejection of artificial insemination and contraceptives. His vocal criticism drove Henryk Hoser, the archbishop of Warsaw-Praga, to suspend Lemanski last week. But Lemanski wrote the archbishop a letter informing him that he wouldn't budge.

When, on Sunday, three envoys dispatched by Hoser showed up at Lemanski's church, they were quickly surrounded by an angry crowd. "This is our parish," they called out. Lemanski said he still considered himself to be shepherd of his flock according to canonical law. The three clerics finally retreated after they were jeered at and booed. They barely managed to get into their car when the crowd began pushing the vehicle in the direction of Warsaw. After that, the Polish edition of Newsweek ran a cover story describing Lemanski as the "Church's No. 1 Enemy".

Despite the show of support from his congregation, Pastor Wojciech ultimately decided to resign. He said he still considered the bishops' decision to be unfair, but that he would yield. "Today you are pushing a car, but tomorrow you will flip it over or possibly even hurt somebody," he sternly told his followers. Lemanski then packed his things and left the parsonage. He said he will wait for a decision from the Vatican regarding his dispute with the church hierarchy, but that he wishes his successor well.

The controversy surrounding the fearless priest underscores just how distant the Catholic Church has become from its flock in Poland. Some 90 percent of Poles still identify themselves as faithful Catholics, but ever less are attending church services. For many, faith has become a totally private issue.

During the Nazi occupation and later under the communists, the Catholic Church was considered the true protector of Poland's national identity. The formula applied that anyone who was Polish was also Catholic. But 24 years after the fall of the Iron Curtain and nine years after Poland's accession to the European Union, the public image of the clergy is predominantly negative. Bishops and priests seem to be preoccupied with internal church intrigues and are failing to supply answers to the people on everyday issues -- at least that's the image many have of the church.

Poland was the only EU country that recorded growth during the global financial crisis in 2007 and 2008 and, statistically, Poles are among the hardest-working people in Europe. Stressed-out couples in Warsaw or Poznan simply have little understanding for the church prohibiting artificial insemination. A large part of the Polish population, particularly in the cities, has experienced an enormous upswing in recent years. Gay people living openly has become normal in many places and fewer and fewer women are willing to eschew careers to have children, as the church would like them to.

Pawel Wronski, a church expert at the respected daily Gazeta Wyborcza, says the dispute surrounding Lemanski is a fundamental one. It reveals a "major conflict over what shape the church should take. Should it be more open and engage with believers and non-believers -- or should it be a shamanic church?"