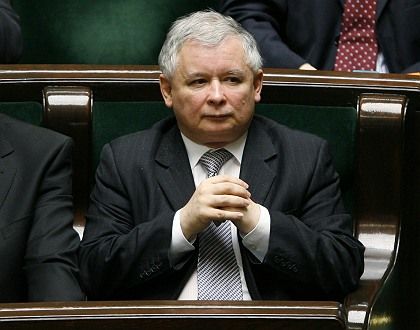 Jaroslaw Kaczynski has done a U-turn on the Lisbon Treaty.

Last year, then Polish Prime Minister Jaroslaw Kaczynski and his twin brother Lech, Poland's president, were a major thorn in the side of other European Union members when they threatened to torpedo the draft EU reform treaty intended to replace the failed European constitution. Now teeth are grinding again in Brussels as Jaroslaw Kaczynski, now in opposition, threatens to block the treaty in its ratification stage -- despite having hailed the treaty as a success while prime minister.

The anti-EU wing of Kaczynski's nationalist Law and Justice party is demanding a referendum on the charter, known as the Lisbon Treaty. "If ratification is pushed through in its current shape, we will be forced to abstain or vote against," Kaczynski told reporters before a parliamentary discussion of the treaty Thursday.

Kaczynski had originally been expected to support ratification of the treaty, as he had helped to negotiate it while prime minister and boasted of his success at the time. However he has now said his party would only back the treaty if the ratification bill included a statement affirming that Poland's constitution takes primacy over EU law and that Poland has the right to leave the union at any time. Analysts say he was forced to change his position due to pressure from his party's Eurosceptic wing.

If Poland did hold a referendum on the treaty, then it could inspire calls for similar votes in other countries, delaying the ratification process. All 27 EU member states must ratify the treaty, which replaces the failed European constitution rejected by voters in France and the Netherlands in 2005. So far France, Hungary, Romania, Malta and Slovenia have ratified the new charter. Ireland is the only EU member planning to hold a referendum.

Prime Minister Donald Tusk has urged Kaczynski to drop his opposition to the treaty, while refusing to defer to Kaczynski's demands. The treaty must be approved by a two-thirds majority in Poland's lower house of parliament, which has 460 members. Kaczynski's party hold's more than one third of the seats. Speaking in Brussels Thursday on the sidelines of an EU summit, Tusk sought to play down the row. "The treaty and its ratification is not in danger," he said. "There is no problem."

Poland's parliament debated the treaty Thursday but postponed the session until Tuesday so both sides had time to work out a compromise. Analysts feel Kaczynski is unlikely to block the treaty and believe enough of Law and Justice's around 160 lawmakers would support the treaty to allow it to be ratified. Some observers believe that a compromise solution, such as a separate motion on Polish sovereignty, will be found, allowing Kaczynski to save face.

A recent opinion poll shows that over 60 percent of Poles support the treaty and just 13 percent oppose it. Most of the opposition comes from within the ranks of the followers of the controversial Polish priest, Father Tadeusz Rydzyk. Rydzyk's Radio Maryja radio station opposes the EU and was instrumental in getting the Kaczynski twins into power in 2005.

Meanwhile Jaroslaw Kaczynski made headlines earlier in the week when he spoke out against Internet voting, saying that Poland should not adopt online voting because Internet users were a bunch of beer-drinking pornography users. "I am not an enthusiast of a young person sitting in front of a computer, watching video clips and pornography while sipping a bottle of beer and voting when he feels like it," he said in an interview published Wednesday on Law and Justice's Web site. He also said that Internet users are the "easiest group to manipulate."