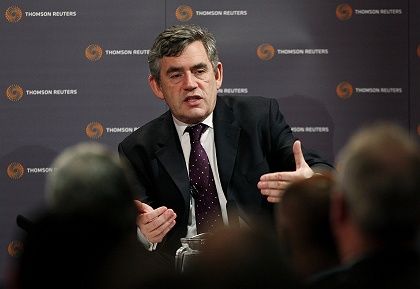 Gordon Brown may be on the rebound.

British Prime Minister Gordon Brown was once again talking about the financial crisis, earnestly stroking his ashen temple. His government would "do everything necessary," he promised in his sonorous baritone. Then a cell phone rang.

A mischievous expression appeared on the face of the normally cranky-looking Scotsman, and he cracked a joke: "Just another bank that needs help." The laughter could have sounded forced - gallow's humor isn't everyone's thing, after all. But Brown's audience enjoyed a hearty and relaxed laugh. The spontaneous joke was a success.

Spontaneous? Witty? Britons are rubbing their eyes, because they no longer recognize their own prime minister. For months -- a whole year even -- Brown had spoken about political leadership without showing any. Suddenly, he can claim to have shown the world a way out of the financial crisis. "Made in England" should be stamped on many of the bailout packages now on offer in Europe and overseas. Partial nationalization of banks, state guarantees for loans between banks -- Germany, France and America have all been following the example set by Britain.

Britain's opposition Conservative Party is complaining that Downing Street's sense of triumph is misplaced. The Tories' finance policy spokesman George Osborne said that the British bailout package is merely "the last chapter of the age of irresponsibilityfor which Gordon Brown is himself responsible."

At the moment, Osborne isn't getting very far in the media with his critical evaluation of Brown. The political cartoons are now depicting Brown as Atlas, carrying the world's burdens on his shoulders. By contrast, in the previous months it had seemed as though the pressures of the office were too much for the Scot. And his poll numbers seemed to be permanently stuck in the basement. The British justifiably blamed the Labour government, which has been in power for the last eleven years, for the slowing economy and the chaos in the City of London financial district. For most of those years, Brown was Britain's finance minister. Since June 2007 he has been the prime minister at Number 10 Downing Street.

But then Brown began making an honest effort to turn things around. His most recent cabinet shake-up reflected the gravity of the situation. When Brown brought back his hated intra-party rival Peter Mandelson from Brussels to name him his economics minister, London's battle-hardened political elite was left speechless.

Then Brown set out to clean up the City of London, the cockpit of global turbo-capitalism. Half of the City is now under direct or indirect ownership of the British taxpayer, among them proud institutions like the Royal Bank of Scotland and Halifax Bank of Scotland. Brown has invested government money in nearly worthless bank stocks, issued state guarantees for medium-term credit and pumped liquidity into the market.

London is propping up financial institutions with 500 billion pounds to keep the British economy afloat. The accolades for this approach came from the newly-named winner of the Nobel Prize for economics: Paul Krugman wrote that Brown and his Treasury Secretary Alistar Darling have shown "clear thinking." "The British plan is not perfect, but it offers the best possible example for a widely applied bailout."

The success of Brown's plan has little to do with his powers of foresight -- it's due, rather, to a combination of good timing, the British system of government and the weaknesses of Europe's common institutions. First, Brown had the luxury of letting the Americans act first and he learned some important lessons from the failure of the original Paulson plan.

Second, Britain's "elected dictatorship" allows the prime minister to act quickly without formally involving parliament, much less the opposition. Tactically, it makes sense that Tory chief David Cameron offered a truce for the duration of the financial crisis, but Brown never needed his assent. His "national" economic council is solely comprised of Labour ministers and civil servants.

Thirdly, Brown benefited from the fact that the members of the euro-zone didn't recognize the gravity of the situation quickly enough -- or, like France's President Nicolas Sarkozy, they wanted the British involved from the start.

By contrast, the German government's reputation has suffered. Finance Minister Peer Steinbrück went on too long suggesting that the finance crisis was a primarily American phenomenen. For her part, Chancellor Angela Merkel seemed unsteady, first chiding the Irish for unilaterally guaranteeing bank deposits, then following their lead.

The British polls have yet to reflect Brown's new found self-confidence. Britain's national debt is rapidly rising, unemployment is growing steadily and the cost of living is mounting sharply. In order to experience a true political rebirth, the prime minister is going to need much more than a relatively effective bank bailout plan and one or two spontaneous jokes. Either way -- British and European politics has become exciting again.