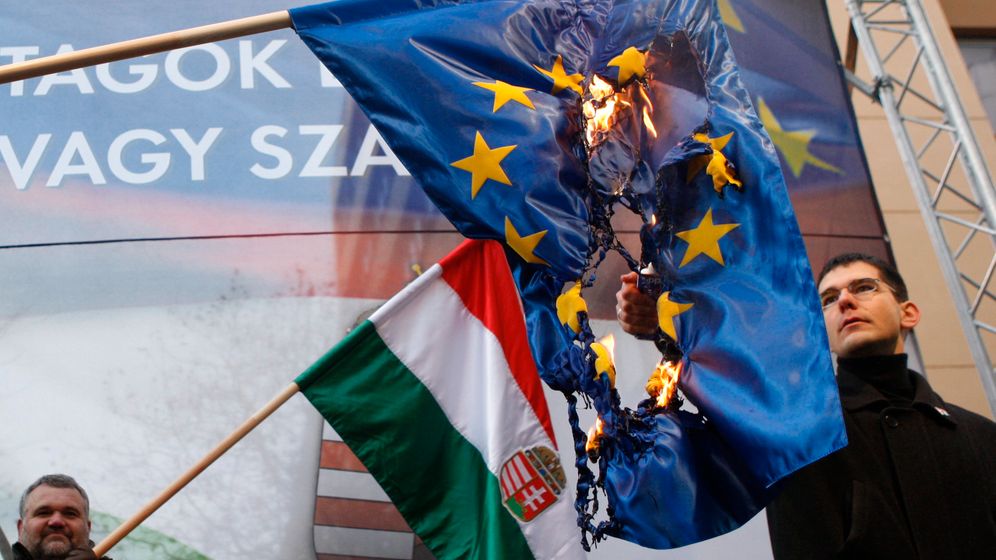 Hungarian Prime Minister Viktor Orbán only needed a few years. In that short time he managed to turn his country inside out. Civil liberties and press freedoms were reined in, the democratic separation of powers annulled, and a constitution passed in the spirit of the country's former authoritarian-nationalistic leader Miklós Horthy.

Hungary is politically isolated in the European Union, and on the verge of national insolvency. And now the European Commission has launched legal action against the country. Brussels sees Orbán's constitutional reform as a violation of EU law, and is threatening to deny economic aid to the heavily indebted country. It's a remarkable development for a country once seen as a model for reform to be emulated by other countries in the region.

Orbán himself, formerly a much-admired politician, now seems like a dubious mix of Vladimir Putin and Hugo Chávez. But the diminutive politician from the tiny northwestern Hungarian village of Alcsútdoboz is by no means a special case. Orbán and his Hungary represent a political movement that is sweeping across central and southern Europe.

A dangerous storm is brewing in the shadow of the euro crisis. The devastating consequences of the 2008 global financial crisis were never fully overcome in Eastern Europe, and more countries in the region are falling into financial and economic imbalance, battling sprawling debt, high budget deficits, recessions and unemployment.

But it's not just the fragile economies that are at risk. Many central and southern European societies also lack political and social stability. These regions have two decades of uninterrupted reforms and tough austerity policies behind them. Many people there are exhausted, and democracy fatigue, euroskepticism, and aversion towards the once deified West are on the rise.

"In many respects, it's a process similar to the disillusionment in Eastern Europe with socialism in the 1970s and 1980s," says Hungarian economic scholar and publicist László Lengyel. "The danger of this is that entire social classes or regions like those in eastern Poland, Slovakia and Hungary fall victim to hopelessness and extremism."

A Return to Populism and Nationalism

It's a "crisis of Eastern European democracies," says Romanian political scientist Cristian Pârvulescu. "The high expectations that Eastern Europeans so triumphantly attached to their entry into the EU have not been fulfilled on a number of levels," he explains. "We are observing a return to populism and nationalism. Thus the developments in Hungary should serve as an alarm signal for Brussels."

Indeed, Hungary is an object lesson for the tragedy of societies in transition. A change in the elites in the state apparatus and economy never happened after the voluntary exit of Hungary's communists and the much vaunted peaceful revolution of 1989-90. Following a short period of euphoria over the end of the dictatorship, the Hungarian economy suffered a swift and sustained collapse, and hundreds of thousands were suddenly unemployed. As a small group of old-yet-new elites enriched themselves with the often dubious, criminal privatization of former public property, the rest of the population was forced to suffer repeated economic and social shock therapies. This meant that few attempts to reform national and public finances were ever seen through.

After the turn of the millennium, Hungary became the first Eastern European victim of globalization, as many foreign companies moved further east. Large chunks of the country's economy, such as the agricultural and food industries, were too underdeveloped to survive the country's accession to the EU in 2004.

The socialist-liberal coalition government in office between 2002 and 2010 solved none of Hungary's pressing problems, excelling instead at protracted political disputes, mismanagement and corruption. Without these eight lost years, Orbán and his right-wing nationalist Fidesz Party would not have earned their overwhelming two-thirds election victory in April 2010.

Bulgarian political scientist Ivan Krastev views Orbán's policies as a "very serious attempt to solve Hungary's crisis through nationalist means," but warns against dismissing the Magyar leader as a madman. "Orbán and his model are generally underestimated in the West," he says. "Right now Hungary's neighbors are looking at Budapest with reservation. But what happens when a government has nothing left to offer but such a nationalistic model? If even four or five countries in Eastern Europe do the same thing Orbán has done, then the EU has a real problem."

There's already a foretaste of such a scenario. The EU has long since lost its role as a force for order in Eastern Europe. From the Baltic States to Bulgaria, hardly an Eastern European country truly stands behind EU projects. In the Czech Republic, President Václav Klaus has always agitated against the EU and the euro and has thereby stirred political turmoil in the country. Most recently, the battle over the EU fiscal pact has led to a government crisis. In Estonia, resentment is growing against the cost of the euro bailout efforts. After elections in March the populist Robert Fico, who previously governed between 2006 and 2010, could take the helm again. And when in doubt, Romania's populist President Traian Bsescu supports the United States rather than the EU. Meanwhile there have recently been major clashes in Bucharest against his government's austerity measures.

Only Poland, the largest among the EU's Eastern European country, is bucking this trend. The nationalist Law and Justice party (PiS) has been unable to win an election since 2007, and in the most recent parliamentary elections in Oct. 2011, the majority voted in favour of pragmatic, pro-European candidates. Polish political scientist Marcin Zaborowski, who directs the Polish Institute of International Affairs, attributes this to "increasing maturity in Poland's political landscape" and a "decline of nationalistic and populist currents."

The Poorest Members of the EU

But Poland is no exception when it comes to the socio-economic developments in the region, which still remains the poorest in the EU. Particularly in Romania, but also in Poland and Bulgaria, this has led to an exodus of workers. Some two to three million Romanians alone work in Western European countries, most of them unskilled. But skilled professionals like academics, engineers and doctors are also leaving their homelands. In Romania the situation has led to a near absence of proper medical care in rural areas and small towns.

Legal uncertainly and corruption are also still widespread in these countries. So widespread, in fact, that an increasing number of people in the region have lost all trust in democracy and their state institutions. Many have the feeling that they live in a "democracy without democratic qualities and without voting possibilities," says Bulgarian political scientist Krastev.

The example of Hungary shows where this loss of trust in democratic institutions can lead: In addition to Orbán's populist Fidesz party, the far-right Movement for a Better Hungary, commonly known as Jobbik, also triumphed with 17 percent of the vote in the 2010 election there. Since then they have become the second-strongest political force in Hungary.

Polls reveal a climate of hate spawned by the right-wing nationalist and extremist discourse of the last few years. For example, nearly two-thirds of Hungarians believe that the influence of Jews is too great in their economy, and that the Roma have a genetic predisposition towards criminality.

Among the hated "foreigners" in Hungary are also the "Piresians," a people that have only existed in the country since 2006. Budapest pollster Tárki invented them as a control variable to measure racism and xenophobia in the country.