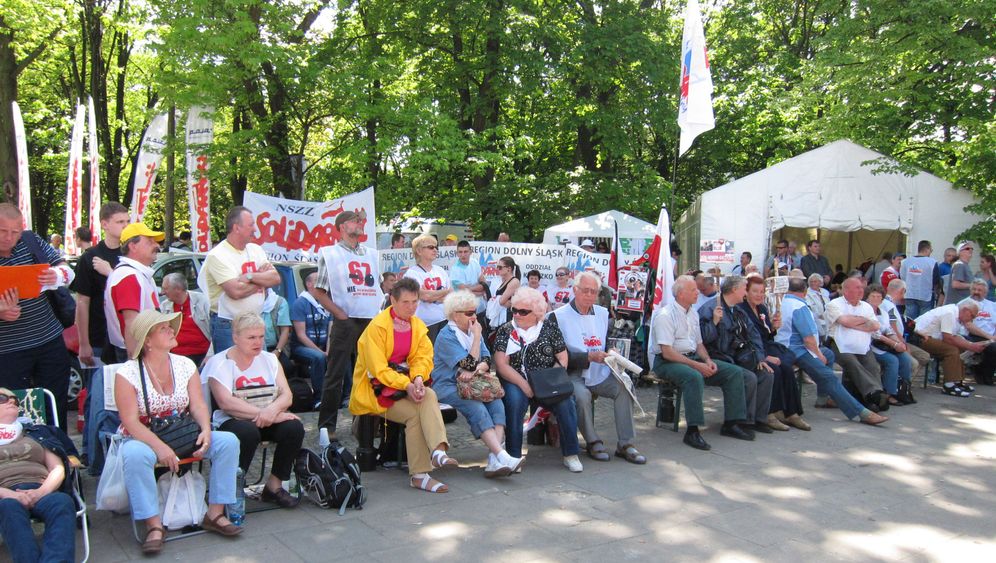 Photo Gallery: Left Behind in Poland

Even though hundreds of wrinkles crease her face, Barbara Przybyz does not look like a poor woman. The 83-year-old has a well-kept permanent wave and wears a lavender-and-white blouse. A black handbag dangles on her arm. She explains that she worked as a regular employee of a major bank in Wroclaw, in western Poland. She hasn't doesn't have much left in old age. She now receives a monthly pension of 1,000 zlotys (€250/$310).

"I could not survive without the financial support of my daughter," she says.

It's a hot day in mid-May. Przybyz made the trip from Wroclaw to Warsaw by bus to protest in front of the Polish parliament. The trip was organized by the Solidarnosc (Solidarity) trade union. The legendary workers' organization, which once drove the downfall of the Communist regime, gathered a few hundred people from all over Poland for the protest. They are supposed to be demonstrating against planned pension reform, which elected officials in the Sejm, or lower house Poland's parliament, will soon vote on.

The government led by Prime Minister Donald Tusk wants to raise the retirement age, which is now 65 for men and 60 for women, to 67. The move is part of an economic-modernization program that has been carried out for years by the country's economically liberal leaders and that has earned the country international praise.

Poland has come through the financial crisis better than any other country in Europe. The economy has been growing steadily, producing a reasonably prosperous middle class. The European Football Championships, which will kick off in Warsaw June 8, will give the country an added boost.

But not everyone has been profiting from the economic miracle on the Vistula. Many have lost out -- including those who are dependent on the state, such as senior citizens and nurses, whose salaries have not kept pace with the boom.

Poland is becoming increasingly westernized, especially in the big cities, and is growing richer. Nevertheless, there is a gap between the people who benefit from modernization and those who are being left behind. "The segment of the population that has missed out is growing," says Cornelius Ochmann, an expert on Poland at the Bertelsmann Stiftung.

As a result, these days, Solidarity no longer fights against communism but, rather, against the collateral damage brought on by capitalism.

Barbara Przybyz says she joined the Solidarity movement in 1980 just after its creation. "I had hoped then that it would be possible to kick out the communists and lead a dignified life," she says. Instead, in her view, the current liberal regime is just like the communist one: it despises ordinary people.

Many differences remain between the Solidarity movement and its western European counterparts. Many Polish union members are conservative voters. At a rally in front of the parliament, many demonstrators stop to pray. One man carries a wooden cross bearing the image of the late Polish pope, John Paul II. Written on it are the words: "God, Honor, Country." The German metalworkers' union, IG Metall, would consider such a gesture futile.

"The pope shows us the way," says another man, who believes that Poland needs to shift back to traditional values, such as honesty, which he believes have been lost in the new Poland. The man does not wish to be identified, but he reveals that he works in a factory in Wroclaw that manufactures refrigerators for an American company.

"I don't see why I have to get such a low pension just because the communists ruined the economy," he says, gesturing in the air with his hands. He's wearing a beige baseball cap, and he has put a white Solidarity vest on over his track-suit jacket.

And to make matters worse, he says, the liberal government now wants his children to work longer-- so that, some day, they can also receive a paltry pension like his. "The ordinary people are the losers," he says. "The liberalization of politics has left them worse off."

Anger is highest among those who consider themselves left behind -- and there are many of them. While the unemployment rate went down during the economic boom of recent years, at 10 percent, it is still comparatively high.

According to the latest figures from Eurostat, which provides statistics on behalf of the European Commission, in 2010, more than 17 percent of Poles were at risk of slipping into poverty. In the neighboring Czech Republic, meanwhile, that figure was 9 percent.

The social divide is particularly noticeable in the Praga district of Warsaw. Modernization has long been overlooked in this part of town, which is near the new football stadium. Until three years ago, poorer people could live here cheaply in run-down townhouses.

"In 2009 there was a huge increase in rents," says Jakub Gawlikowski of a local advocacy group for tenants' rights. "Suddenly the flats were 200 to 300 percent more expensive. Many of the older residents could no longer afford to pay and were shoved out the door."

At that time, Gawlikowski, along with others in his community, founded the tenants' committee. They wanted to do something about what they perceived as an injustice. Now they organize sit-ins during forced evictions and provide advice to displaced residents.

Their headquarters is a little room in the basement of a dilapidated building. The plaster is crumbling from the façade of the building. Inside the room, there are two tattered sofas, a couple of old armchairs with a floral pattern, a wooden table and two chairs. The protest posters on the wall feature pictures of people raising their fists to the sky and two black-and-white photographs of a woman.

"A former tenant," says Gawlikowski of the woman. "She was the last left in the house and resisted when the new owners wanted to throw her out." Last year, her burned body was found in the woods. The authorities claimed it was suicide, but Gawlikowski and his fellow campaigners don't believe it.

Gawlikowski, a young man with curly brown hair and a hoody sweatshirt, sits on one of the two sofas in the tiny headquarters. Next to him is Marek Jasinki, another member of the committee. Together they advise the many desperate tenants being threatened with eviction. "The number keeps increasing," says Jasinki. Some 200 people per month now seek help there.

Soon, there could be more. The government is planning a new law that would make it easier to forcibly evict tenants in formerly state-owned buildings once they are transferred back to their original owners.

"If the new owner raises rents, the old tenants end up homeless," says Jasinki. He says the city only offers the poorest of the poor another apartment, and the rest have to consider whether or not to stay. One reason, he says, is that the city has not provided enough social housing for years. "The idea of social housing has become perverted," Jasinki argrily says.

Here in Praga, the conflicts generated by the country's societal change are readily apparent. In between dilapidated old buildings, new apartments for the well-to-do middle class keep popping up.

Meanwhile, directly opposite the derelict building housing the tenants' committee, a glass palace is being erected. The building is home to a business newspaper named Puls Biznesu, or "The Pulse of Business."