On a rainy November afternoon in his cramped office at the European Parliament in Brussels, Francesco Enrico Speroni, co-chair of the right-wing populist Europe of Freedom and Democracy Group (EFD), does not mince his words: "We have not been successful."

Italy's Northern League party, which the 67-year-old Speroni has represented in the parliament on and off since 1989, and its populist allies have failed to roll back European Union integration and prevent bureaucrats in Brussels from interfering in the national affairs of member states, he says.

His staff assistant interrupts him, in Italian, and gently prods the politician. "You're very negative today," she offers. But Speroni plows on, in English, undeterred. Despite predictions that populists from England to Hungary could make significant gains in next year's elections, Speroni believes the populists' power in parliament will not fundamentally shift. "The opposition will be greater, but still not much will happen: We don't have the votes to change the direction of the EU."

The EFD -- one of seven political groupings in the 766 member parliament -- was formed following the last election, in 2009. The bloc is comprised of 32 members from 12 different EU countries, with the United Kingdom Independence Party (UKIP) holding the most seats (nine), followed by the Northern League (seven).

While all of the parties represented in the EFD are nationalist by nature, broadly critical of deeper EU integration and the euro zone, and claim to represent the popular will of their publics, the alliance is more practical than ideological. "The main reason they come together is because to not be part of a group is to be in quite a weak position," explains Jodi Vacquer, director of the Open Society Initiative for Europe. "A group gives them legitimacy and more speaking time" on the floor of the parliament, Vaquer adds. Unlike other parliamentary political groups -- like the Christian Democrats, Socialists, or Greens -- the EFD does not have a shared, pan-European agenda. Members are not required to vote along a party line, but are rather encouraged to vote as it suits their national interests.

The result is that the EFD has achieved scant to nothing in the realm of parliamentary policymaking. The group has "very little policy impact, and are unable to block many votes because their size is so small," says Marley Morris, a researcher at the Counterpoint think tank. EFD members have instead used the parliament as a soapbox in order to call attention to their national causes and garner media attention, Morris explains.

Lots of Talk, But Little Action

Indeed, the EFD delivered an average of less than one piece of draft legislation per member in committee sessions between July 2009 and October 2013, compared with over 2.5 per member for the center-right European People's Party (EPP) and the center-left Socialists & Democrats (S&D). Meanwhile, during the same time period, EFD members gave the largest number of speeches during plenary sessions, at an average of well over 200 per member, compared with around 150 for EPP and S&D members, according to VoteWatch Europe.

For Nigel Farage, Speroni's EFD co-chair and the group's most prolific orator, maximizing publicity, not legislating, is his end goal. "We have hugely increased awareness of what parliament does and increased euro skepticism," says Farage, who likened the EU to the "new communism" on the floor of parliament earlier this year.

A member of the European Parliament since 1999, Farage has long advocated for British withdrawal from the EU. These days, however, he is openly opposed to the very concept of the union. "Now I don't want Europe in the EU," he says. "It's an anti-democratic project run by bad and dangerous people."

Farage's radical and uncompromising stance on the EU is not shared by all EFD members. The Finns party's representative in the EFD, Sampo Terho of Finland, says his group would like to remain in the EU and "keep the euro," but prohibit euro-zone bailouts and return more legislative authority to national capitals. Although his party doesn't share UKIP's position of exiting the EU, Terho says EFD is a "workable" because its members are free to vote as they choose.

But others in the group, including, Speroni, have moved closer to Farage's position over the past few years. Europe's apparent failure to "solve" the euro crisis has encouraged Speroni to favor an Italian withdrawal from the EU and, at the very least, putting Italian euro-zone membership to a national referendum. "There is no discrepancy between me and Nigel," Speroni says of his alliance with Farage.

Despite his relationship with Farage, Speroni remains open to joining a potentially new bloc with other populist parties after next year's elections -- including with Italian rival Beppe Grillo's Five Star Movement or Marine Le Pen's French National Front (FN). Le Pen -- whose party currently holds three seats in the European Parliament but stands to increase its presence to 18 next May -- is in talks to form a new, more ideologically cohesive populist group with Geert Wilders' Dutch Party for Freedom (PVV). "Maybe they will exclude us or maybe they will ask us to join," says Speroni.

He bristles at concerns over the FN's anti-Semitic history and contends that was only an issue in the past when the party was run by Le Pen's father, Jean-Marie. (Northern League, which has also been accused of anti-Semitism, was part of a short-lived group between 1999 and 2002 that included the elder Le Pen, who is still a member in the parliament alongside his daughter.)

For his part, Farage says he is "not open" to an alliance with Le Pen and Wilders, excluding the possibility that the FN could join the EFD. "Le Pen has made great strides, but issues like anti-Semitism are too embedded," says Farage. The Finns' Terho concurs. "We would probably not accept (Le Pen) because she's too controversial. She's making the right decision by talking about forming a new group," he says.

The divergent EFD responses to the potential upsurge of parties like Le Pen's illustrate the ideological heterogeneity of populist parties across the Continent. There are both "xenophobic" and "euroskeptic" populist parties, says Vacquer. Both types vary in their level of ideological fervor and also overlap at times. Northern League -- a party with a legacy of bigoted statements that advocates for the defense of European Christianity from an onslaught of largely Muslim immigrants -- and the more extreme and openly anti-Semitic Hungarian Jobbik party are both examples of this crossover. UKIP, which takes pains to distance itself from any overt racism, falls more squarely into the euroskeptic box.

While most of the populist parties in question tend to be right-wing and nationalist, they do not always fall into a traditional left-right divide, particularly on economic issues. Italy's Five Star Movement advocates leftist policies, including wealth redistribution -- and yet it has also been accused of being both a fascist and anarchist party.

The social and political context of a given nation plays a large role in shaping the economic policies of populist parties, says Roland Freudenstein, the deputy director at the Center for European Studies. UKIP is a product of its British environment, and so it is "inherently friendly to entrepreneurship," he says. Meanwhile, as a French populist, "Le Pen is almost socialist in her rhetoric about globalization." He adds, "Some of these populist parties are proof that the left-right paradigm belongs to the 20th century."

All European populist parties, however, "share a very strong anti-elitist feeling, and their voters have a much lower level of trust in institutions and the mainstream media," says Vaquer. This anti-establishment basis allows for some coordination across national borders at the European level. Moreover, many of the parties are increasingly "finding common cause against immigration," while calling for a joint defense of a "broader European form of identity and Western values," says Jamie Bartlett, head of the violence and extremism program at Demos, a British think tank.

The euro crisis has also helped populist parties to shape a common stance against the so-called Brussels elite, even if the reasons differ. In Northern Europe, populists like the Finns point to the alleged mismanagement of taxpayer euros that have gone to huge EU bailout programs, while populists in the south, like the Five Star Movement, cite Brussels-imposed austerity that has hurt ordinary workers. "The crisis is inevitably a good opportunity" for populists, says Catherine Fieschi, director of Counterpoint. "It plays a role in terms of how it shapes the language" and helps make the views of a party like UKIP seem "commonsensical," she says. But Fieschi also cautions against seeing the crisis as the reason for the rise of European populism, noting that the FN and others have been gaining traction for over a decade.

Nonetheless, experts widely agree that populists will increase their presence in the parliament after the election. There are currently around 60 right-wing populists in parliament, including the majority of nonattached members -- meaning those who are not affiliated with any group like the current FN members -- and those in the EFD. Counterpoint's Morris predicts that number will rise to at least 100 next May, including gains for EFD's UKIP, the Finns, and the Danish People's Party -- though not for Northern League, which is expected to lose seats to the Five Star Movement. However, it will not necessarily prove easy for these parties to form workable political alliances.

To form an official group, parliamentary rules require that at least 25 members from at least one-quarter of EU member states be represented. Morris outlines a number of potential scenarios for populist alignments: In one, the EFD largely stays intact, alongside a new bloc led by the FN; in another, an FN-led group emerges as the only official populist bloc, with the rest (including UKIP) becoming non-attached members; and a final scenario results in the EFD continuing to be the only populist group, with the FN remaining non-attached. What is clear from Morris' analysis, though, is that the Northern League will prove decisive for the future of the EFD. If Speroni decides to join forces with Le Pen, it could signify the collapse of the EFD.

Regardless of how the parties coordinate, the populists will be "fragmented" and unable, despite increased numbers, to have "a huge impact on how the EP works," says Morris. But, he cautions, the "reason to be concerned is because of the kind of impact it could have on the stability of member states, and shifts in what mainstream parties do." Morris suggests that center-left and -right national parties could increasingly adopt xenophobic and anti-immigration policies to attract voters sympathetic to the populists.

At the parliamentary level, though, the populists are unlikely to have much luck unraveling the European project. If anything, their presence might paradoxically be a boon for EU advocates, says Giles Merritt, secretary general of the Friends of Europe think tank in Brussels. "The populists will force the European establishment to explain itself and argue its case" for greater European solidarity, Merritt says.

Moreover, as Speroni resignedly explains, "The proponents of integration will still have an absolute majority." 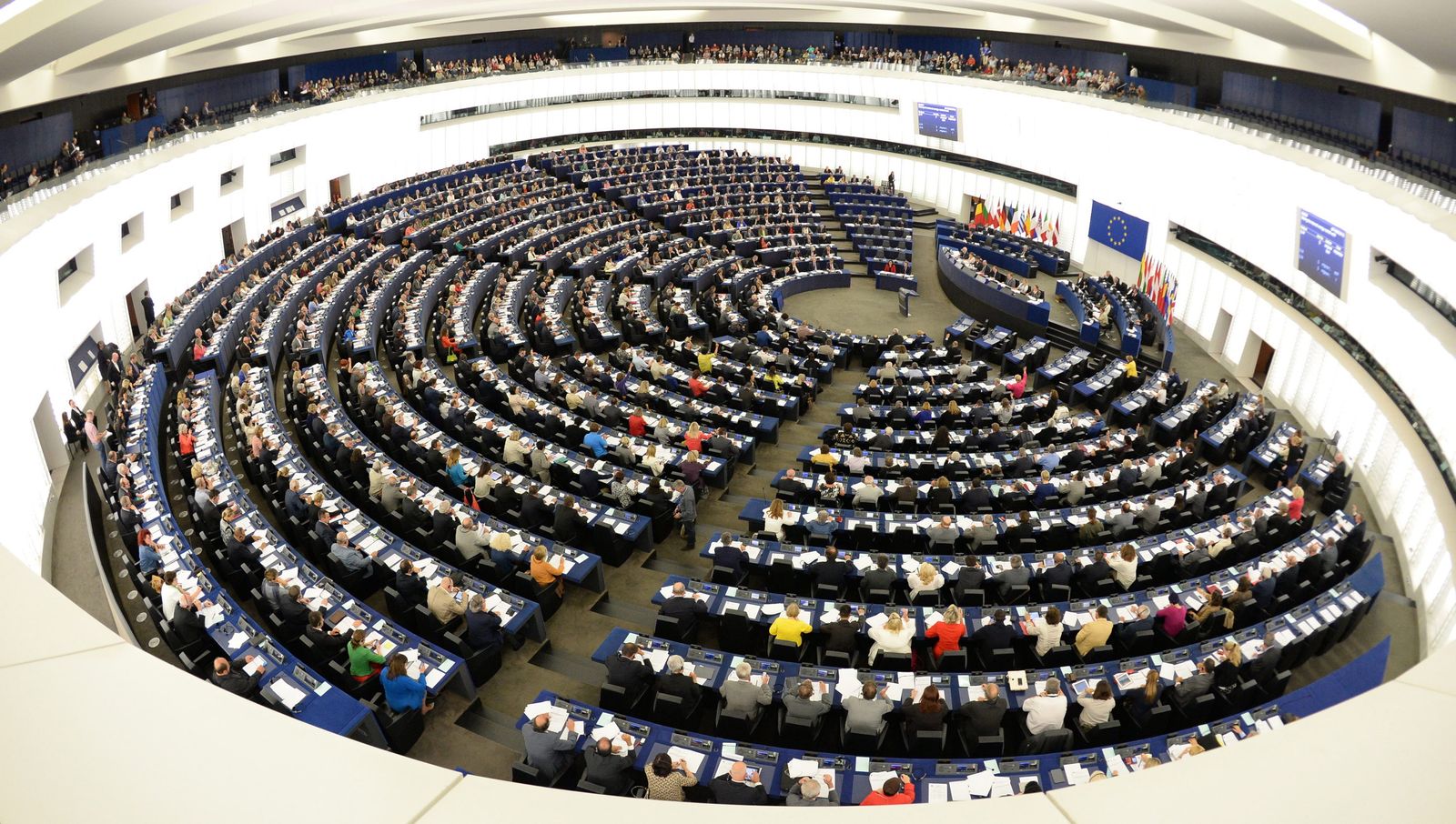 The European Parliament in Strasbourg: Populist parties are likely to make gains in elections this spring.