There are a number of different theories for why the coronavirus has caused so much less suffering in Portugal than in neighboring Spain. The hardest to disprove is the following: "We have Fátima. The Spanish don't have anything like it."

The reference is to the pilgrimage site of Fátima, located between Lisbon and Coimbra. In 1917, the Virgin Mary appeared to three shepherd boys there on several occasions, entrusting three secrets to them - including, allegedly, the attempted assassination of Pope John Paul II in 1981.

"When a friend told me of this theory, I realized how much damage the virus has already done to people's minds," says António de Sousa Mendes, a retiree with a grand family history. As the consulate in Bordeaux, his father saved thousands of people from the Nazis and arranged for their escape through Spain to Lisbon. "For me, it's like a flashback to the year 1940," says Sousa Mendes over the phone. "The huge number of deaths across the border in Spain. The lines at the border crossing." The only difference being that they are now waiting in mobile homes instead of in horse carts, back when Portugal was the final sanctuary for many Europeans fleeing the oncoming German army.

Knowing this history also helps understand the Portuguese government's decision - unique in Europe – to allow access to the country's health-care system for all migrants and refugees whose asylum requests have not yet be resolved.

It was the fear of developments similar to those seen in Spain that drove Portugal to adopt precautionary measures early on. In early March, President Marcelo Rebelo de Sousa was the first head of state to go into voluntary quarantine. Luckily, it was a false alarm, but it served its purpose as a warning. Supermarket chains like Pingo, Doce, Continente and Lidl began only allowing small groups of customers inside at a time. Shoppers were surprisingly disciplined and the darker the news from Madrid, Barcelona and Milan grew, the larger became the distances between people waiting in line.

As of Thursday, Portugal had 13,141 confirmed cases of COVID-19 with 380 people having died from the disease. With a population of 10 million, those numbers aren't bad at all. Despite a less robust health-care system - Portugal has 6.4 intensive-care beds per 100,000 residents versus Germany's 33.9 – the mortality rate among coronavirus patients stands at 2.7 percent.

In Spain, by contrast, the mortality rate is 9.8 percent – with 10 times the number of positive cases. The result: the number of fatalities is almost 40 times as high in Spain as in Portugal. Every new statistical report coming from Johns Hopkins University provides yet more confirmation that Lisbon's response has been better than its big brother Madrid.

In Portugal, 87 percent of those who have died were over 70 years old and two-thirds were over 80, numbers that are similar to statistics elsewhere. The vast majority of suspected cases or patients with mild symptoms are kept at home, amounting to 85 percent of those who have tested positive. It is a prudent strategy, given that in northern Italy, the virus frequently spread in hospitals, despite all of the precautions.

"It is fear that has led to people behaving relatively responsibly," says Ana Girbal, an epidemiologist in Lisbon and director general at the Portugal branch of the Italian pharmaceuticals company Italfarmaco. Most of her staff are now working from home. "The state is paying 66 percent of people's salaries if they have children to care for," she says.

No Vapor Trails in the Sky

Self-discipline, the early reaction from public institutions and the country's geographical location at the edge of Europe may be the primary reasons for the relatively mild outbreak in Portugal thus far. In addition, no mass events have been held in the country recently, such as the March 8 Women's Day demonstration in Madrid. And there is a further possible explanation: In contrast to Spain and Italy, seniors in Portugal are generally vaccinated against tuberculosis. A recent study has found a possible correlation between countries where such a vaccine is mandatory and a lower COVID-19 morbidity rate.

Ever since country declared a national emergency on March 18, the city of Lisbon has been unrecognizable. Or, to be more precise, it can once again be recognized as the special place it once was. The tuk tuks are gone as are the drunk tourists on Rossio Square. The souvenir shops have closed, the cruise ships are absent, and the mobs of tourists have thinned out.

There are no vapor trails in the sky, no honking, no laughing and in the evenings, only rarely does one hear a car in the old town. It's just the screeching of the seagulls and, these days, the sound of the wind.

A completely empty streetcar 28 rumbles past the cathedral. Avenida da Liberdade, Lisbon's answer to the Champs-Elysées, looked on Saturday as though it was the set for a post-apocalypse film. The center of the boulevard was left to the joggers, the homeless and the cats, but everything else was completely empty. Airplanes flying in have become an exotic sight and those who can have headed for the countryside. Three-quarters of the restaurants and hotels in Portugal are closed.

Most air and sea connections to Madeira and the Azores have been cancelled and most border crossings to Spain are also closed. Instead of 500 international flights taking off from Portugal each day, there are just 24, including only a single connection to Germany. All airports have been closed over the Easter holiday weekend and trips to other cities are prohibited - part of the effort to limit the traditional Easter visits of Portuguese living abroad.

"The banks are indebted to the country."

From an economic point of view, of course, all of these measures are disastrous, especially for a city like Lisbon, which has only just managed to recover from the dark days of the financial crisis, largely thanks to tourism. Indeed, the corona crisis has struck Portugal just as the most important economic indicators began rising and an "economic miracle" was being evoked. The country's budget deficit is lower than it has been in decades, unemployment has been on the decline and austerity measures recently loosened. And now this.

President Rebelo de Sousa has demanded the bank sector provide loan assistance for small and family-owned companies. Referring to the bank bailouts of 2015, he said: "The banks are indebted to the country. Every Portuguese contributed (back then) to keeping the banks from collapsing."

The Socialist Prime Minister António Costa, for his part, has been reserved in joining calls from his Italian and Spanish counterparts for corona bonds, opting for a milder tone: "We aren't clinging to names or descriptions like some magic fetish," he said last week. The most important thing, he said, is that the EU holds together - and the first steps toward that goal have already been taken. The moderate tone, of course, can partially be explained by the fact that Portuguese Finance Minister Mário Centeno is head of the Euro Group.

But the country also has a certain hard-boiled approach to catastrophes. Portugal survived the financial crisis just as it did the earthquake of 1755. "Bury the dead and feed the survivors," were the orders allegedly delivered back then by the Prime Minister, the Marques de Pombal. A monument to him stands in the center of Lisbon.

One of the first measures taken by the Lisbon city administration was to waive rent payments until the end of June for all renters in publicly owned housing. Food coops have been set up along with shelters for the homeless and the validity of monthly public-transportation tickets has been extended.

On Thursday, Prime Minister Costa was to announce whether schools might be reopened in early May on a trial basis. They might even go back into operation on May 13, the anniversary of the Virgin Mary appearance in Fátima. The day of miracles. You never know. 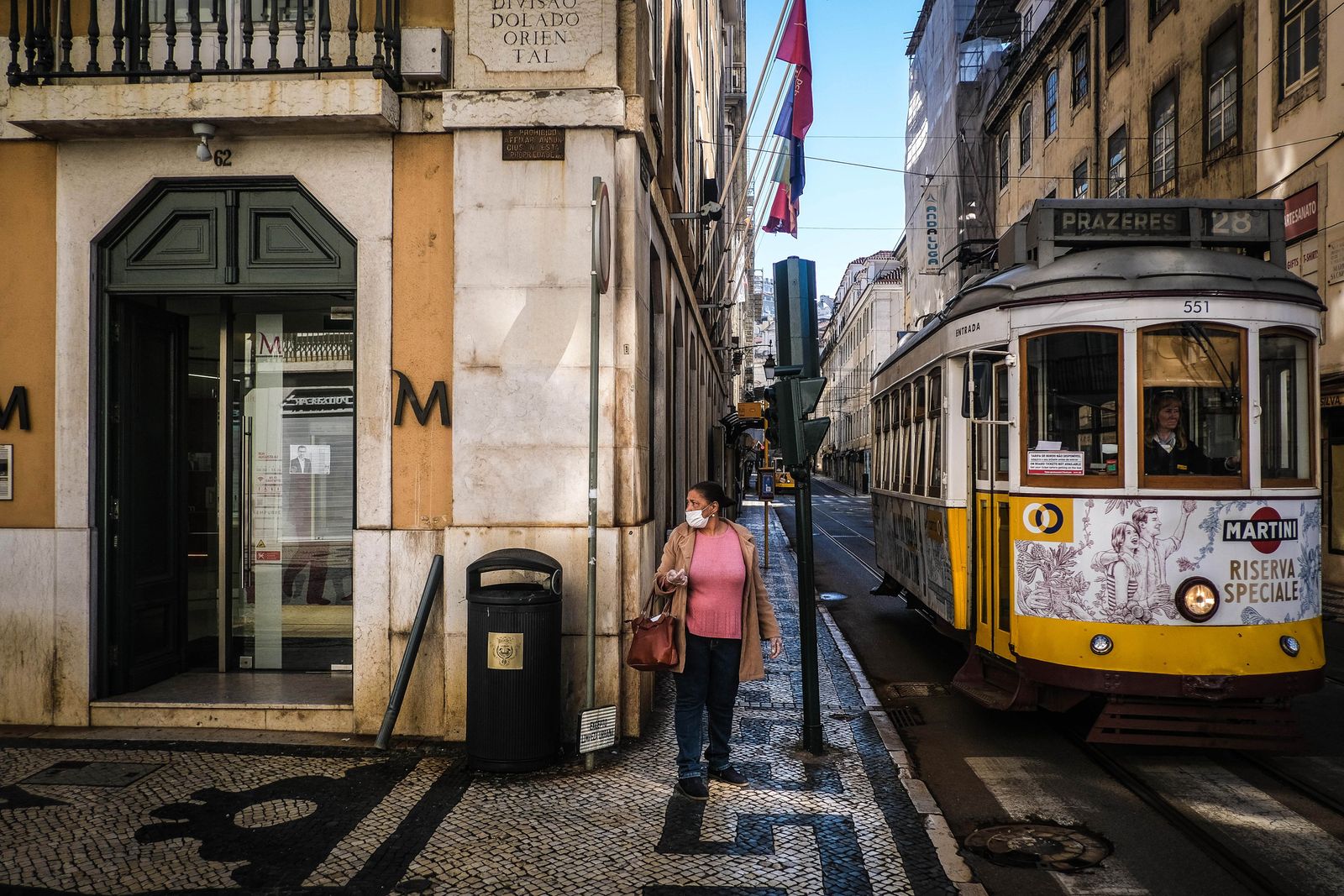 The famous Streetcar 28 in Lisbon: Self-discipline, the early reaction from public institutions and the country's geographical location at the edge of Europe. 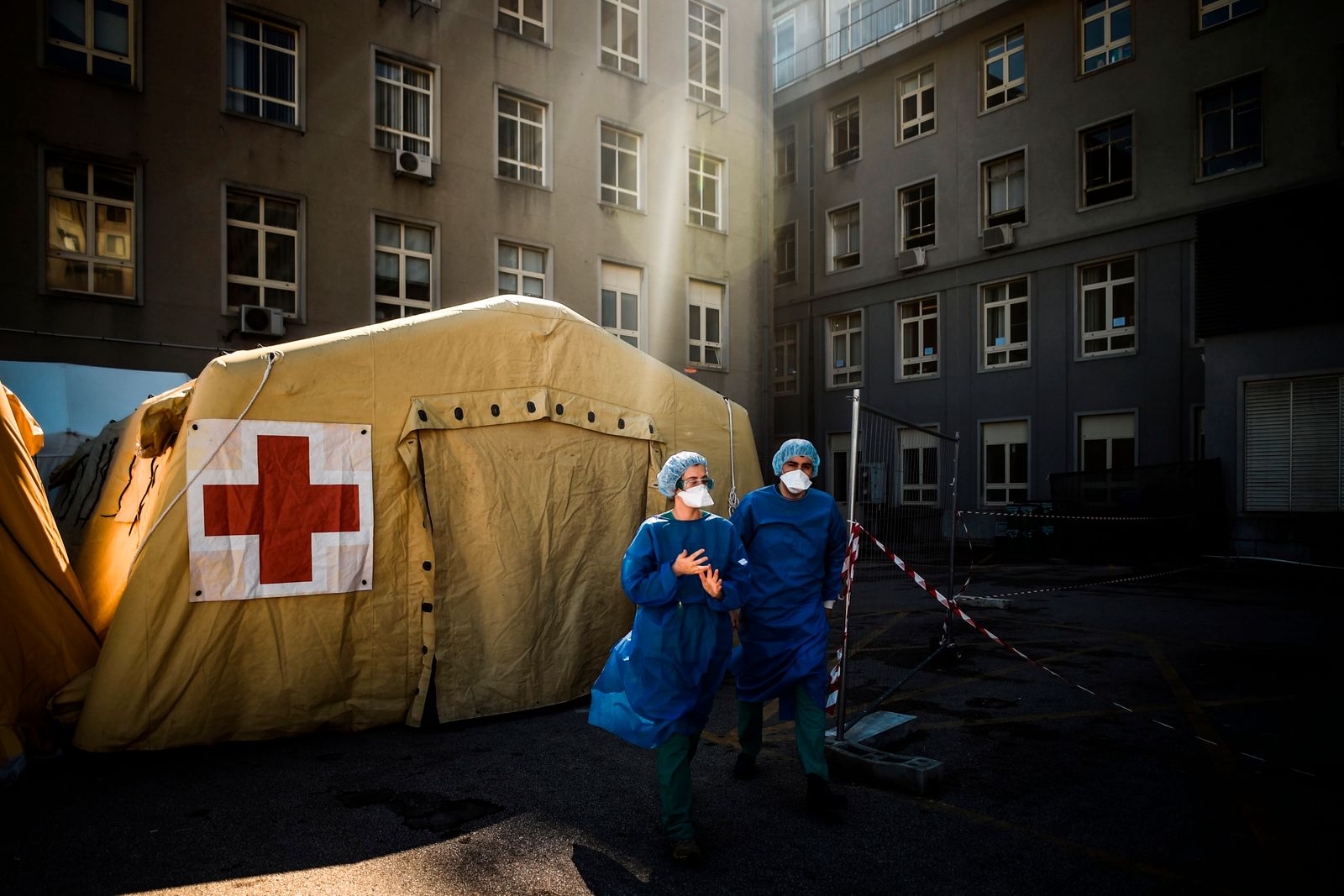 A tent set up in front of a hospital in Lisbon. 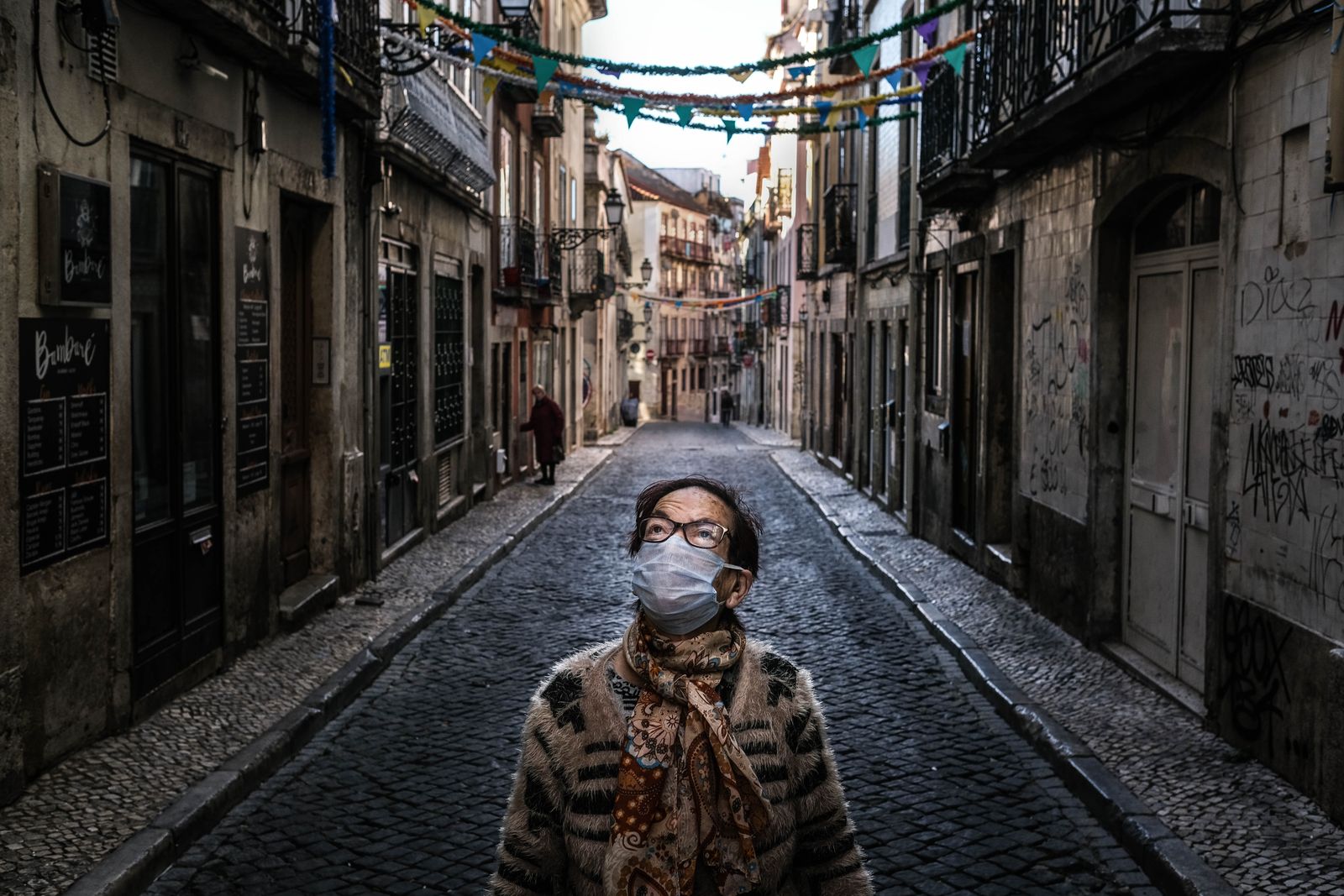 A Lisbon resident in the Barrio Alto neighborhood. 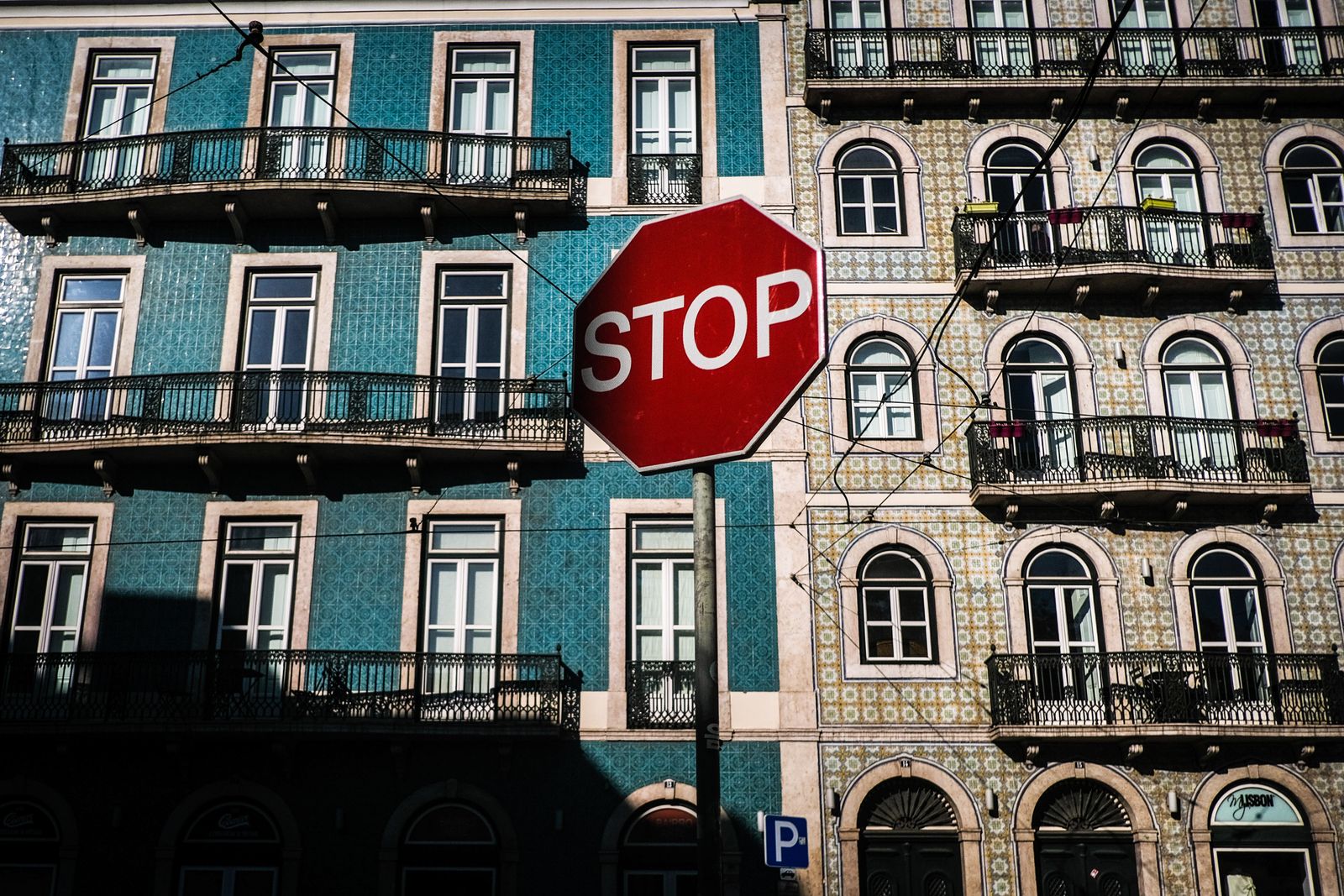 Portugal had just begun recovering from the financial crisis. And now this.