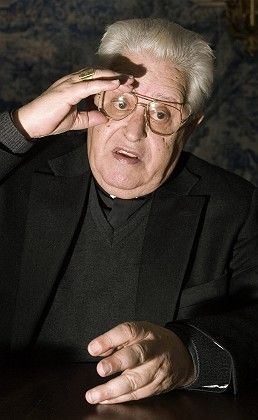 Portuguese Cardinal Jose Policarpo adjusts his glasses during an interview in a file photo from 2007.

The leader of the Catholic Church in Portugal has warned young women not to marry Muslims. Cardinal Jose Policarpo of Lisbon said Christians should learn more about Islam, and respect Muslims, but "think twice" about a marriage across religious lines.

"The advice that I give to young Portuguese girls is: Be careful with love, think twice about marrying a Muslim," said Cardinal Jose Policarpo of Lisbon on Tuesday evening. "Think seriously because it brings loads of hassle, and even Allah can't say where all that will end."

It's Vatican policy to discourage Catholic women from marrying Muslims. But Policarpo's comments, made in a public forum on Tueday and later aired on Portuguese TV, have caused a ruffle of controversy in his small nation, which has about 40,000 Muslims, according to Muslim leaders in Lisbon. Many are from neighboring countries in north Africa.

"I know that if a young European of Christian background marries a Muslim," Policarpo said, "as soon as they go to his country, they'll be subject to the regime of Muslim women. Just imagine it."

Portugal is an 85-percent Catholic nation of about 10 million people. As a rule there is no friction with its small Muslim minority. But Policarpo -- a cardinal tipped as a contender in the 2005 conclave that elected Pope Benedict -- seems to have followed the Vatican's example of saying provocative or impolitic things about Islam. In a speech in 2005 Pope Benedict quoted a 14th-century Byzantine emperor, Manuel II Paleologus, who suggested that Islam was "spread by the sword."

On Tuesday Policarpo said dialogue with Muslims was "difficult."

"It is only possible to dialogue with those who want to have dialogue, for example with our Muslim brothers dialogue is very difficult," he said. "We have taken the first steps, but it's extremely difficult -- because for them, their truth is the only way."

Islamic leaders in Portugal so far have not responded, but a spokesman for Portugal's episcopal community, Manuel Marujao, said the cardinal was offering "realistic advice" rather than "discrimination" or "contempt for another culture or religion," according to the Catholic news agency Ecclesia.