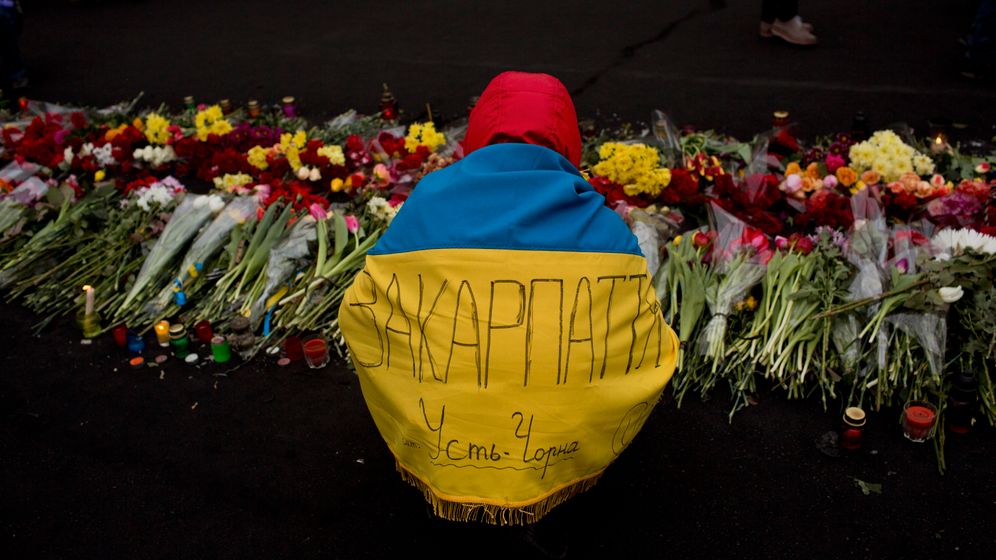 It was 11:37 a.m. last Wednesday when Rinat Akhmetov, Ukraine's wealthiest and most powerful oligarch, released a statement: "Like all Ukrainians, we want to create a new country in which democracy and the rule of law are supreme. We will participate in the blossoming of Ukraine."

Akhmetov, who controls more than 100 companies with 300,000 employees, was a close confidant of toppled Ukrainian President Viktor Yanukovych. In contrast to many others of his standing, he remained in the country and his statement was a clear indication that he had switched allegiances to the new government in Ukraine. It was received with a sigh of relief in Kiev.

By then, many other rich and powerful Ukrainians had long since left, including the top Ukrainian official sitting sitting in a café near Pushkin Square in the center of Moscow last week. He too had served the Yanukovych government in recent years. "Only God knows when I will be able to return to Kiev," he says. Afraid that the country's new leaders might take revenge, he adds, "please just call me Oleg."

Oleg can effortlessly recite the names of section heads responsible for issues pertaining to Russia and Ukraine in the foreign ministries of Western European capitals. He knows them all. He soberly recounts how Europe rebuffed him and his delegation while the Kremlin ratcheted up the economic pressure on Ukraine in recent years. "The EU should have gotten involved," he says.

Then Oleg explains the preparations made by Yanukovych to storm Independence Square, the location of the mass protests that ultimately brought down his government. Oleg says he knows that fighters from the elite ALFA unit were responsible for setting fire to opposition headquarters and that ALFA snipers opened fire on demonstrators from the rooftops of surrounding buildings. "Everything went according to plan. But then Yanukovych suddenly flinched and ordered the offensive to be stopped," Oleg says.

He says that when foreign ministers Frank-Walter Steinmeier, Laurent Fabius and Radoslaw Sikorski spent the night negotiating with Yanukovych on February 20-21, the Ukrainian president's aides were busily preparing his escape. "They packed up suitcases and boxes. In the end, the helicopters were so heavy that they could hardly take off," Oleg says.

Last week, several additional members of Yanukovych's entourage arrived in Moscow. Many of them consider their former head of state to be a traitor who plunged his country into chaos through his indecision. Even some of Yanukovych's closest allies have headed abroad, such as Sergei Kurchenko, a 28-year-old billionaire. Kurchenko is said to have fled to the Belorussian capital of Minsk after Yanukovych was toppled. Then, eyewitnesses claim to have seen him in the bar of the Radisson Royal in Moscow a week ago.

Kurchenko is considered the financier of the Yanukovych clan -- he is referred to in Ukraine as the "billfold." His VETEK Group most recently reported annual turnover of some €7.3 billion ($10 billion). One year ago, with Ukraine stuck in a deep economic crisis, the company invested in a service station chain in Germany focusing on liquefied natural gas. Kurchenko also purchased a refinery in the Ukrainian Black Sea city of Odessa from the Russian oil giant Lukoil. In December 2012, he bought the football club FC Metalist Kharkiv, along with the stadium.

He had, in short, become part of the top-league of eastern oligarchs, despite his modest origins. With an estimated worth of $2.4 billion, he had climbed up to seventh place in the list of the country's richest people published by the Ukrainian magazine Korrespondent. He is not, however, mentioned in the list published by the Ukrainian edition of Forbes. Because the magazine had published several critical articles about his fairy-tale rise to riches and his friendship with Yanukovych's oldest son Alexander, Kurchenko simply bought the publication.

It was, however, a former journalist at his new paper who discovered 30 sacks in an underground garage in Kiev early last week. They contained shredded documents from Kurchenko's collection of companies. Prior to the discovery, VETEK employees had removed computers from the holding company's offices and destroyed their hard drives. The bags of shredded documents revealed contracts, legal proceedings and bank remittances, including the purchase of a motorboat for €2 million. Insiders have begun reporting about the wasteful and eccentric lifestyle led by the up-and-comer. The oligarch allegedly hired a celebrity chef from the West and paid him €100,000 for just one day's work. When Kurchenko didn't like what he was served, he fired the cook.

The oligarch was married, but also is said to have maintained a relationship with a Moscow television personality. He flew with his mistress across Europe in his private jet and they would meet for dinner in the Russian capital in a private section of Turandot, the famous gourmet restaurant.

His ties with Yanukovych were close right up until the end. Just two weeks ago, the National Bank of Ukraine propped up Kurchenko's Brokbusinessbank with a billion hryvnia, roughly equivalent to €84 million. The loan came at a time when Ukraine was facing bankruptcy.

Yanukovych remained loyal to the young businessman because Kurchenko was an important building block of his regime. Last summer, when Ukraine was still flirting with Europe, Kurchenko made preparations to purchase natural gas on European markets via foreign subsidiaries. It was clear to the leadership in Kiev that were Ukraine to sign an Association Agreement with Brussels, the Kremlin would likely respond by curbing natural gas deliveries. That would have been a problem for Yanukovych the president, but not Yanukovych the businessman -- Kurchenko would have resold the natural gas to Ukraine at a hefty mark-up, and the president's clan would likely have profited as well.

The collapse of the Yanukovych regime has changed the lives of many in Ukraine. Kurchenko isn't the only one who has disappeared. The judge who once sentenced Yulia Timoshenko is also missing as is the ex-interior minister who referred to the Maidan activists in Kiev as fascists and the former commander of the Berkut special police force, which was disbanded last week.

But in Kiev, anarchy has been making inroads. Ukrainians speak of "Makhnovshchina," a reference to the anarchist-Communist partisan movement under the leadership of Nestor Makhno during the civil war that started in 1917. Makhnovshchina is a term applied to anything that smells of capriciousness and chaos.

Revenge taken against the rich and prominent is part of that chaos. In the Kiev suburb of Gostomel, 20 assailants burned down an estate belonging to Communist Party head Petro Symonenko. A Toyota Land Cruiser and an Aston Martin Vantage -- a €129,000 vehicle allegedly driven by his wife -- were found in the garage.

Parliament has seen its share of audacity too. Last week, laws were being rapidly pushed through -- including some of with doubtful legal underpinnings and seemingly questionable adherence to the constitution. But revolution is in the air and everything has to go quickly. On occasion, Speaker of Parliament Oleksander Turchinov introduces appointments and then signs them immediately, as acting president of Ukraine.

Tuchinov was long the éminence grise of Yulia Timoshenko's Fatherland alliance, but has now become the country's most important figurehead. He is head of parliament, acting president and is simultaneously coordinating the establishment of a new government. "Yanukovych couldn't have dreamed of having so much power," commented the editor-in-chief of one Kiev newspaper.

The biggest loser thus far has been Vitali Klitschko's UDAR party, which has been unable to keep up with Turchinov's fast pace. When it came time to appoint a new governor of Ukraine's national bank last Monday, UDAR was still trying to agree on a candidate of its own. Undeterred, Turchinov simply called a vote and had his own favorite installed -- a candidate who hadn't even been part of previous discussions. The Fatherland alliance, with its experienced apparatchik Turchinov, is handing out portfolios and cabinet positions as it sees fit. Last Wednesday, its party head Arseniy Yatsenyuk was named acting prime minister.

Early on, the protesters on Independence Square could only stand by and watch, basically forgotten as power was divvied up. It is the fate of many revolutionaries: The new power brokers seek to do away with those who brought them to power. But last Tuesday, the Maidan, as the movement is known, forced parliament to delay the establishment of a transitional government and won a promise that a third of all government posts would go to activists instrumental to Yanukovych's overthrow. Only the radical Right Sector militant group was dissatisfied. The group had sought to get its leader, Dmitry Jarosh, appointed deputy prime minister, a post which also includes responsibility for the police and secret services.

And Yulia Timoshenko? Her arrival on Independence Square a week ago as part of a convoy of Mercedes and Lexus sedans was not well received. It shows, wrote one Kiev newspaper, that she "still doesn't understand what is happening in the country." Half of the emotions she displayed in her Maidan speech, it argued, were feigned. "Ukraine needs reforms, not emotional outpourings."

Timoshenko, one of the heroes of the 2004 Orange Revolution, seems to have understood. When it came to divvying up government posts, she too made a plea on behalf of the Maidan activists.

Still, the skepticism activists have for Timoshenko remains difficult to ignore. They are afraid that the political profiteering of recent years will carry on, just with different beneficiaries. And Timoshenko herself was long part of the Ukrainian establishment.

Their concern appears to be justified. Last Monday, a high-ranking officer from Ukraine's customs administration contacted a newspaper to inform editors of a new deal pertaining to the "internal" allocation of unexpected customs revenues. No longer would confiscated money and valuables be given to Yanukovych's Party of Regions as they had been previously. Rather, they would go to the Fatherland alliance. Timoshenko, the man said, had personally approved the deal. Furthermore, the Communist Party, he said, had been handed the leadership of the customs administration so that it would support Timoshenko in the future. The impression was that the struggles for influence which characterized the years following the Orange Revolution had returned.

Still, Kiev-based publicist Valery Kalnysh says she remains hopeful that the political system will be able to clean itself up. She notes that many parliamentarians now support a move to make police archives public as well as those from the defense ministry, the secret services and the public prosecutor's office. Nowhere in the former Soviet Union has such a step been taken.

Recent documents have already begun coming to light. Last week, papers emerged showing that the SBU secret service had sought to recruit people on Independence Square to provoke a military response. The papers also showed that the Ukrainian army had been tapped with the crushing of the protests. According to order number 313, issued on Feb. 18, 30 trucks, two helicopters and 2,500 troops from the airborne forces were to be made available. The soldiers were to be deputized as military police and allowed to arrest civilians and raid homes and apartments. The use of weapons was expressly permitted.