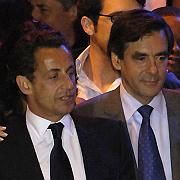 French president-elect Nicolas Sarkozy and his political advisor Francois Fillon, who is widely tipped to be the next prime minister.

On Monday morning, French president-elect Nicolas Sarkozy flew off with his family to the Mediterranean island of Malta to recharge his batteries after a gruelling election campaign. He will have little time to relax though, as he is faced with a number of pressing tasks, including forming his new cabinet and preparing for the next battle: national parliamentary elections in June.

France experienced another night of violence on Monday night, as demonstrators clashed with police, but Sarkozy's first real battle is likely to be with the powerful trade unions, which arent going to accept his sweeping social reforms without a fight.

In Paris between 300 and 400 youths gathered at the Place de la Bastille on Monday night -- a traditional meeting point for left-wing demonstrations. Things turned nasty when the protestors started smashing windows, setting fire to scooters and clashing with the police. The CRS riot police arrested around 100 people. And once again the protests were not confined to the capital. In Nantes, 400 protestors gathered and many smashed windows and damaged cars before being dispersed by teargas.

In Lyon, 500 demonstrators gathered while in Caen 800 people voiced their protest against the Sarkozy victory. In Tours, around 300 people attended a peaceful demonstration that had been called by trade unions and the Revolutionary Communist League (LCR). On election night there had already been widespread unrest in Paris and other cities, with 730 cars set on fire and almost 600 people arrested.

The social democrats have called for an immediate end to the violence. Francois Hollande, the head of the Socialist Party (PS), said Tuesday that the election result had to be accepted: "There may be disappointment, anger and frustration, but the only way to react, is by voting."

Although Sarkozy is far away from the tumult caused by his victory, it is unlikely he will have much of a chance to relax on his island retreat. He is in the midst of drawing up his cabinet, which is to include 15 ministers, roughly half of whom will be women. When Sarkozy takes over from Jacques Chirac next Wednesday he is widely expected to appoint his political advisor Francois Fillon as prime minister.

Sarkozy has also said he plans to hold a summit with social partners shortly after he takes office, where he intends to discuss his planned reforms. They include cutting taxes, loosening labor laws, dumping the controversial 35-hour work week, cutting back on public services and curbing union powers.

Labor movement leaders have already denounced his plans and have threatened crippling strikes in the autumn if he attempts to force them through. "All attempts to pass things by force would backfire," warned Jean-Claude Mailly, the head of the left-wing Force Ouvriere union on Monday. The more moderate CFDT union also called for consultation with, and respect for social partners. "The method which the president will choose to drive his reforms will be critical," the union said in a statement on Monday.

Sarkozy's immediate task is to prepare the ground for the election campaign. He needs to ensure that he has a conservative majority in parliament to be certain of pushing through his reforms. He desperately wants to avoid the dreaded "cohabitation" -- which is more or less the French equivalent to the German grand coalition -- where a president and prime minister of different sides of the political spectrum are forced to govern together.

But for the PS, cohabitation could be the only way of blocking the Sarkozy "revolution," that entails dismantling many of the social protections the left holds dear. Hollande has warned against any infighting before the elections on June 10 and 17. "Today we have to lead the battle for the legislative election, with everyone on board. Afterwards we need to rebuild the left."